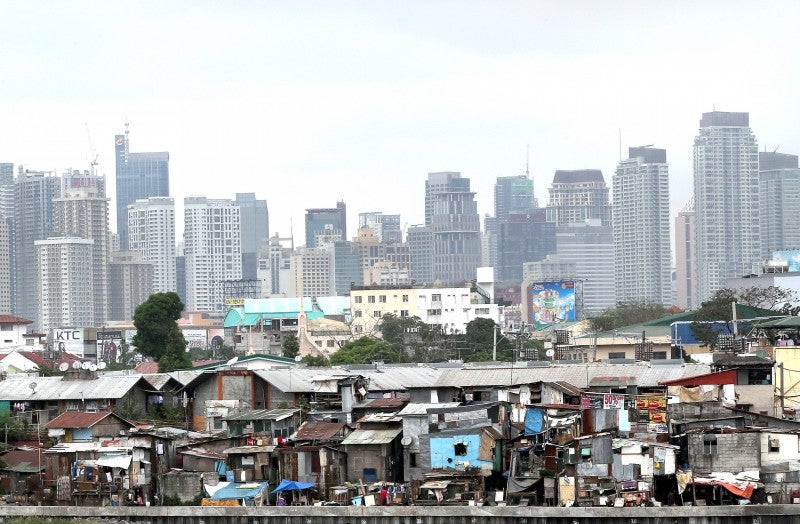 THE GREAT DIVIDE The growing gap between the rich and the poor is best illustrated in this photograph showing the midrise buildings and skyscrapers of the Makati Central Business District overlooking the shanties of Barangay San Roque Riverside in Pasay City. RAFFY LERMA

All our candidates in one form or another are of course promising faster growth and improved development outcomes. What has been the Philippine track record on growth?

When asked to do an economic briefing two days ago, I decided to tackle the issue. I decided to look at the forest rather than the trees—the big picture, as it were. The title of my talk was “The Philippine Economy: A Long (and Wide) View.”

And it was a long view—showing the growth rates of the Philippine economy, post-World War II (courtesy of the Philippine Statistical Authority), and then comparing these with those of other countries over a 50-year period (1960-2009). The 50-year comparison comes from the Economic Development text I use (Perkins, 7th Edition) at the University of the Philippines.

The table shows each country’s per capita GDP (measured in international dollars) in 1960 and then in 2009, and computes average growth rates. It divides developing countries into four categories—those that showed negative growth over the period, those that showed slow growth (from 0 percent to <2 percent), moderate growth (2 percent to 3 percent) and rapid growth (>3 percent). Not all countries are included, only those for which data are available over the 50-year period—about 34 developing countries.

What causes the differentials in country growth rates? Studies by Sachs, and the Asian Development Bank, have narrowed the contributing factors to four: Initial Conditions, Natural Resources and Geography, Government Policies and Institutions, and Demography. Sachs studied the Philippines over the period 1965-1990, during which our pcgdp growth rate was actually 5.3 percentage points a year behind those of the Asian Tigers (South Korea, Taiwan, Hong Kong and Singapore), and 3.3 percentage points behind the Tiger Wannabes (Indonesia, Thailand, Malaysia) and China. He found that the largest contributing factor to these differences was government policies and institutions. These were responsible for between 70 percent and 79 percent of the differences in growth rates.  These findings were confirmed by ADB studies.

So now we know what the culprits are, right?  Wrong policies, weak institutions. Therefore, Reader, you  should ask: Who are responsible for these? Short answer: our political leaders (now the connection to elections is clear). This I call our “buwaya problem”—which is the surfeit in this country of political leaders “whose decisions, supposedly taken for the public good, are in truth motivated by a desire for private gain and result in policies and projects that impoverish rather than enrich our country.” The “buwaya problem” is compounded by even more greed, because these politicians find “public service” so lucrative that they decide to make a family enterprise out of it, creating dynasties.

Any evidence to support these statements? I give you Nobel Laureate Gunnar Myrdal (Asian Drama) who singled out the Philippines thusly: “Graft and corruption permeate all levels of public life.” And even more painful: “…Perhaps in no other country in South Asia is political dishonesty so widely recognized, accepted and talked about as a part of the political game….” This, in 1968.

Thirty-five years later (I told you, this is a long view), in 2003, the World Economic Forum conducted an Executive Opinion Survey in which the countries surveyed were classified as: low corruption, moderate corruption, and high corruption. The Philippines was one among 10 countries in the last category—and the only Asian country at that. The other comparator countries were all “moderately corrupt.”

In other words, Reader, we were unique—in corruption. And it is not a question of eradicating, just moderating, for now.

What about the effect of political dynasties? That, too, has been studied. And the conclusions are that the presence of these dynasties is correlated with higher poverty, lower per capita income, and lower primary education completion rates. And how pernicious are these dynasties? The Asian Institute of Management estimates (2012) that they accounted for 70 percent of regular legislators in the Congress at that time.

The costs of corruption are not limited to low growth rates and per capita income. They affect development indicators, too.

But on the bright side, some improvement has come since 2009. Data on the Corruption Perceptions Index for  2010-2015 indicate that the Philippines has risen from 139th out of 180 countries in 2009 to 102nd out of 180 in 2015. The pcgdp growth rates for the last five years averaged 4 percent a year. And health, education, and long-term antipoverty prospects are great.

Talking about the next president …

Read Next
Unleash the Ombudsman
EDITORS' PICK
When will PH get enough COVID-19 vaccines? ‘I really don’t know,’ Duterte says
Smart introduces Smart Barkada with the launch of Double GIGA
Duterte: Authorities may take over hotels, but it’s not a ‘remedy’ in a democracy
Smart is fastest 5G Network in PH – Ookla
Duterte defends govt’s efforts vs COVID in 2020
LT Group, Inc. Notice of Annual Shareholders’ Meeting 2/2
MOST READ
‘Duterte a total failure as leader. He must step down’ – group
Duterte ‘privately’ dealing with China invasion in West PH Sea – Palace
Ramon Tulfo says gov’t running PH like a ‘headless chicken’
Stop acting like a colonizer, PH business groups tell China
Don't miss out on the latest news and information.

When will PH get enough COVID-19 vaccines? ‘I really don’t know,’ Duterte says

Duterte: Authorities may take over hotels, but it’s not a ‘remedy’ in a democracy