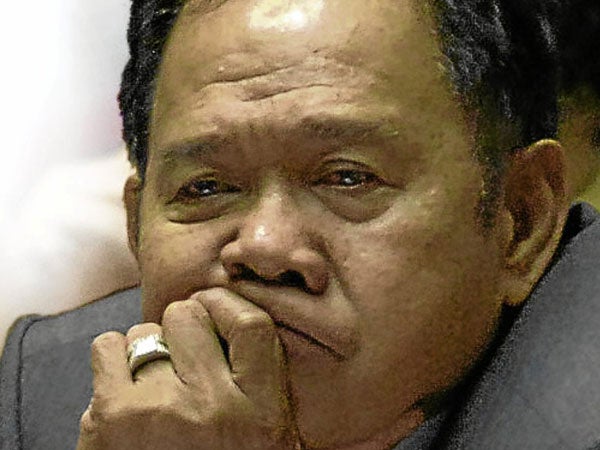 True enough, the man at the center of the election-fraud scandal that nearly brought down the Arroyo administration has turned up again like a bad penny. That’s the thing with unfinished business, with crime that has no restitution: It becomes a canker on the body politic, erupting sporadically in varying degrees of virulence.

Virgilio Garcillano, former elections commissioner and, from accounts, go-to man of election candidates desperate to make the cut, was sighted last Feb. 21 in Cagayan de Oro, in the lobby of a hotel where presidential candidates Jejomar Binay and Grace Poe were staying for the duration of the first of the presidential debates sponsored by the Commission on Elections. He is working as a “consultant,” Garcillano said in response to Inquirer reporter Marlon Ramos’ question of what he was doing there. Consultant of whom, he declined to say.

His appearance at the hotel lobby in this heating-up election season, greeting and glad-handing some of the people present apparently in the manner of a man at home in the world, is a telling detail in the light of his reputation as a man who makes things happen at the crucial counting stage of the voting process. It was as though the “Hello Garci” scandal never occurred, as though he were not driven to flee the country and the searing heat of the moment, as though there were nothing to be ashamed, or even just sheepish, about. In 2005, with her administration buffeted close to crumbling by a tumultuous clamor for her resignation, then President Gloria Macapagal-Arroyo deigned to apologize to the nation for phoning the commissioner during the vote count of the 2004 presidential election where she and movie star Fernando Poe Jr. fought toe to toe; she said she did so only because she was anxious to “protect” her votes. That said, she went on to serve her term even as the scandal, and eventually other scandals, raged on: Uneasy indeed lay the head that wore the crown.

READ: What Went Before: Saga of the ‘Hello Garci’ tapes

For the benefit of those who have forgotten, or who consider unresolved crime as just one of those things in this neck of the woods, here is a transcript of a phone conversation between “Ma’am” and “Garci” caught on tape. Even now, years after the fact, it provides an ample glimpse of the man’s sterling capabilities: “Hello./ Hello, Ma’am, good morning. OK, Ma’am, mas mataas ho siya pero mag-compensate po sa Lanao ’yan./ So will I still lead by more than 1M overall?/ More or less, but it is still an advantage, Ma’am. Parang ganun din ang lalabas./ Oo, pero it will not be less than 1M?/ Pipilitin ho natin yan. Pero, as of the other day, 982./ Kaya nga eh./ And then, if we can get more in Lanao./ Hindi pa ba tapos?/ Hindi pa ho. Meron pa hong darating na seven municipalities/ Ah, OK, OK. /Sige po./ OK, OK, OK.”

Candidate Poe does not seem to have forgotten. She has expressed sadness at the reported sighting of Garcillano at the lobby of the hotel in which she was staying, and said she was worried that, there having been no case filed against him, he was continuing to serve as “consultant” to certain people. “I wonder what kind of consultation he can provide,” Poe, speaking in Filipino, pointedly told reporters. “Do you know what I mean?”

We do. And, like her, we are worried about the possibilities in this election so critical to the nation’s future. There is no closure to the “Hello, Garci” scandal, as momentous and as revealing of the seamy workings of the Philippine political system as it was. It’s like a viscous soup spilled on the living room rug: The stain and the smell linger and get worse during the rainy (election) season. At varying times Arroyo and Garcillano admitted to calling each other to talk about votes, but neither of them ever admitted any participation in election fraud. And at any rate, as then Comelec Chair Sixto Brillantes Jr. announced in 2014, all the parties involved in the scandal were home free, as it were, the prescription period for the filing of cases having lapsed. There were no charges. It’s a clear case, as any seething observer would agree, of perps getting away with murder.

At the first Inquirer Multimedia Forum last year, the featured guest, Comelec Chair Andy Bautista, spoke about the poll body’s preparations for the May 2016 elections. Toward the end of the forum Bautista was asked about the worrisome matter of Garcillano and his minions, whose network could conceivably be considered intact. Bautista acknowledged the matter but did not indicate that it figured in the current Comelec concerns.