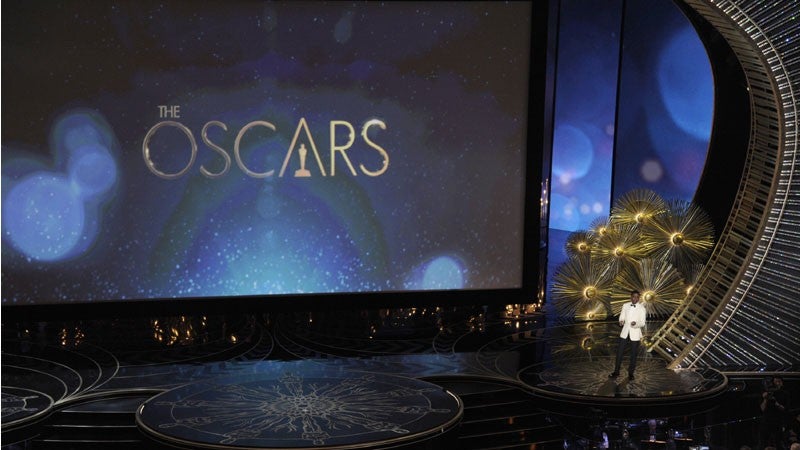 Host Chris Rock speaks at the Oscars on Sunday, Feb. 28, 2016, at the Dolby Theatre in Los Angeles. (Photo by Chris Pizzello/Invision/AP)

We don’t usually go to the movies to be preached at, to be exhorted, to be roused to arms. Usually, we go because we want to be entertained. The more intelligent, the more compleat the entertainment, the better. Occasionally, we want to be provoked, to be reminded of life’s higher purposes. But—for the great mass of moviegoers—meaningful entertainment to help us get through the day is often incentive enough to sit in the dark in the movie house, with perhaps a bag of popcorn in hand.

But over time, in the century or so since the movies became universal culture, and especially since the movies became “cinema,” the province of art, we have also learned to look at our movie stars, and the occasional director or composer or writer of equal fame, as larger-than-life personalities, with something important to say. This expectation has become all the more acute with movie personalities becoming celebrities—known for being well-known, in the historian Daniel Boorstin’s prescient formulation.

All this is to say that, beyond the golden shimmer of the famous red carpet or the brilliance of the opening number or the whirling kaleidoscope of last-minute surprises, fans around the world also look to the Oscars as a bully pulpit. We are ready to see some of the most popular movie stars in the world, as well as independent filmmakers, temporarily lifted out of their customary obscurity, use their acceptance speeches to preach, exhort, rouse the viewer to arms.

This expectation became sharper than usual from the moment the list of nominations was announced for the 88th Academy Awards, when it became clear that, for the second year in a row, the main nominees were all white. No person of color, no Black, no Asian, no Latino, among the lot.

Protests were staged, a powerful social media campaign took off (#OscarsSoWhite), some actors and other movie industry workers even boycotted the show. When the black comedian Chris Rock, the academy’s strategic choice for host, took to the stage, he immediately pointed to the elephant in the room and shook its trunk. “Welcome to the Academy Awards,” he said, “otherwise known as the White People’s Choice Awards.”

It was a low-key opening; there were no musical numbers showcasing the Best Picture nominees, there was no video gee-whizzery to wow the audience. It was just a stand-up comedian’s monologue—and it worked. It got the audience inside the Dolby Theater pumped up about the show, but it spoke directly to the lack of diversity in American and Hollywood culture, the real cause why there was such a stunning lack of diversity among the nominations.

Rock made a misstep with the stereotyping of the Asian children as stand-ins for the academy’s accountants later in the show, but the barbs in his opening monologue echoed in the hall and on screen for a long time. “This year in the In Memoriam package, it is going to feature black people who were shot by the cops on the way to the movies!” he said.

He also offered a view of Hollywood racism that sociologists would do well to study for years to come. Hollywood wasn’t “burning-the-crosses racist,” he said. But: “You’re damn right it’s racist! Hollywood is sorority-racist—We like you, Rhonda, but you’re not a Kappa!”

At the other end of the hourslong show, the Oscar bully pulpit became global, with what must have been the biggest story of the night. The Oscar for Best Actor finally went to Leonardo DiCaprio. One of his generation’s most gifted artists, DiCaprio has done memorable onscreen work, both in so-called small pictures and in some of the biggest movies in history. He had received the honor of being nominated five times before; to the evident relief of his many fans, his sixth nomination, for “The Revenant,” turned out to be the charm.

But if he shared the fans’ anxiety about the possibility of losing yet again, he did not show it. He used his acceptance speech to thank the many people who had helped along the way, and then he ended with a moving appeal for climate change action. “Climate change is real, it is happening right now. It is the most urgent threat facing our entire species, and we need to work collectively together and stop procrastinating.” Spoken like a movie star with something truly important to say. RC/TVJ