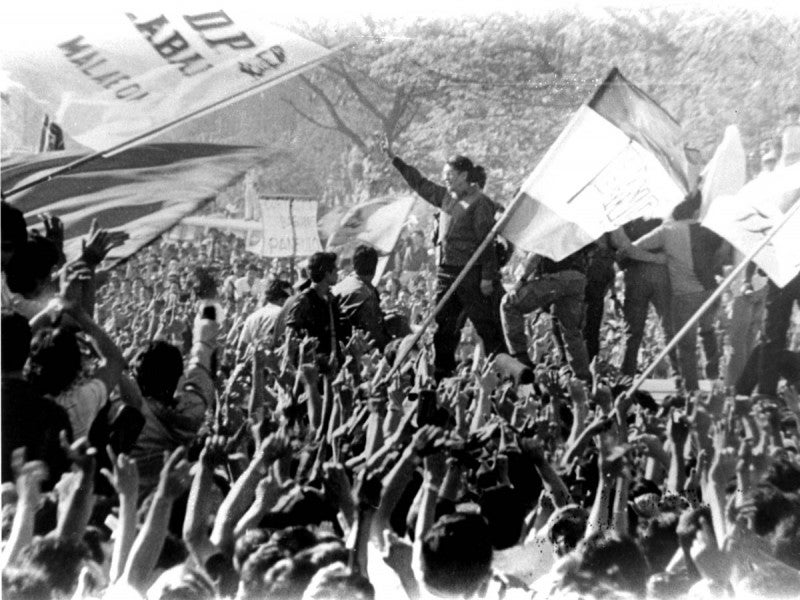 The Philippines is marking the 30th anniversary of the Edsa uprising this week. It’s a good time to ask a few simple questions.

First, what kind of an event was it? Most historians describe it as a civilian-backed coup. Instigated by the attempt of RAM, backed by Juan Ponce Enrile and Fidel V. Ramos, to overthrow the Marcos regime, it took place in haste and, by all indications, was badly planned. The coup plotters quickly found themselves trapped in Camp Crame, and became sitting ducks for Ferdinand Marcos’ loyalist forces. Yet, their helplessness and vulnerability proved to be their strength. Taking pity, or “malasakit,” on the coup plotters, hundreds of thousands of people took to the streets to protect them at the behest of Jaime Cardinal Sin. What began as a civilian-backed coup soon turned into a hybrid event: A combination of fiesta, prayer meeting, political rally, it opened up for those who were there an unexpected horizon of democratic sociality. The mixing of people from different, formerly opposed, groups and social classes lent to the whole event the ambience of a New Jerusalem.

Second, why did it happen? Edsa was not so much a miracle as the culmination of a series of events. Large crowds had already been gathering to oppose the dictatorship ever since the assassination of Ninoy Aquino on Aug. 21, 1983, and the snap elections three years later. These were clearly dress rehearsals for Edsa, as civil society groups, oppositional elites, students, members of the Catholic clergy, and others opposed to Marcos began to coalesce into a growing force. Some high officials began to defect, notably then diplomat and former senator Leticia Ramos Shahani, who publicly repudiated Marcos and sided with Cory Aquino before her own brother did. All these culminated in the show of “People Power” during the fateful days of February 1986 in response to the calls to occupy Edsa.

Third, who made it happen? A wide range of people from housewives to priests, students to nuns, workers, vendors, maids, drivers, teachers and others risked life and limb to turn back tanks and troops. Anti-Marcos opposition figures among the old elites were prominent at Edsa. My own parents, largely apolitical, camped out on the streets. Indeed, the courage of the crowd was crucial in turning the military as a whole against Marcos. Disillusioned by the Marcoses, US President Ronald Reagan, through his proxies, withdrew US support, providing the family with the transport planes to evacuate Malacañang. Interestingly enough, the communist Left chose to sit out Edsa, misreading its nature and timing.

Fourth, and perhaps hardest to answer: What were Edsa’s effects and legacies? Most obviously, it got rid of the much-reviled Marcoses. For a while, there emerged a widespread sentiment that Edsa opened a “democratic space” with the promise for reconciliation and structural reforms. Political prisoners were freed and negotiations got under way with both the communists and the Moro rebels. A new constitution was framed, which provided many protections for civil liberties and set the path toward more equitable national development.

But hopes for change were quickly dashed.  The savagery of paramilitary groups was unleashed on leftist rebels and civilians alike, even as negotiations with Moro rebels failed.  Military coup attempts multiplied and were turned back only with the staunch support of the United States. Criminality intensified and land reform of any sort failed, given the opposition of landowning families to any serious redistribution program.

On the whole, Edsa resulted in the return of the old oligarchy alongside the new—many of them Marcos cronies. It thus amounted to a regime change, not to social change. Far from being a revolution, it was really a restoration of political dynasties side by side with new economic elites.

Edsa also marked the decisive weakening of the Left. Boycotting Edsa, the Communist Party of the Philippines descended into turmoil. Fearing infiltration from deep-penetration agents, the leadership ordered the execution of many cadres. The CPP split between those who reaffirmed and those who rejected its Maoist authoritarianism. To this day, the Left remains fragmented, unable to offer a real alternative to oligarchical rule.

Another legacy of Edsa is the return of the Marcoses, beginning with the dictator’s yet-to-be buried corpse. With their loot largely intact, the family members remain unapologetic to the point of arrogance. Bereft of moral decency, they brim with the confidence of despots. Presidential candidates have had little to say about this, while two of them—Miriam Defensor Santiago and Rodrigo Duterte—along with most local officials from the North, have openly supported Bongbong Marcos.

Thus the supreme irony of Edsa: By restoring elite democracy, it set the conditions for the return of the Marcoses. That restoration began with the swearing-in of Cory in that bastion of ilustrado culture, Club Filipino, in 1986. Successive administrations, including her son’s, would continue the growth of political dynasties.

It’s understandable that many are wistful for the “spirit of Edsa.” For a brief moment, there emerged the possibility of social democracy realized in the unreserved generosity and unstinting courage of so many people on the streets. Today, those streets no longer offer spaces of liberation, but only the entrapment of traffic and pollution. The memory of People Power is daily dissolved by the reality of masses rushing in disaffection, absorbed in their alienation.

Vicente Rafael teaches history at the University of Washington, Seattle.

Sharon Cuneta flies to LA to take some time off: ‘I need to breathe, collect myself’