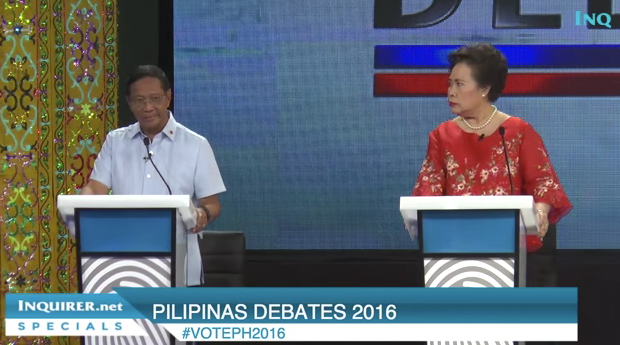 Through the luck of the draw, the question on political dynasties in the third round of the first presidential debate held in Cagayan de Oro City on Sunday went to Vice President Jejomar Binay: the politician who has not only argued for dynasties from the perspective of noble political traditions but also practices this tradition to the fullest.

Young people who had taken part in the Inquirer Town Halls in the week leading up to the first debate wanted to know how the next president would enforce the constitutional prohibition on political dynasties. Binay’s answer hinged on the issue of definition. What does dynasty mean anyway? As long as the definitions were loose, he saw no reason why members of a family interested in public service could not continue to serve simultaneously in elective offices.

But he made the mistake of including Sen. Miriam Defensor Santiago’s family among the country’s dynasties, an error which drew out the full Miriam: She arched her head, glared sharply at the Vice President, and then, in her turn, calmly set him straight. Her son, she said, served one term as a party-list representative in Congress, and that was it.

The Constitution is clear. Article II, Section 26 reads: “The State shall guarantee equal access to opportunities for public service, and prohibit political dynasties as may be defined by law.” The question, and the sentiment, from the young Mindanaoans who raised the issue was also clear: How would the next president make Section 26 a reality?

Binay’s answer reflected current political conditions. A family that has been in public office over a long period of time enjoys what is called brand equity; consider, for instance, the names of those running for vice president. Only Sen. Antonio Trillanes IV and Sen. Gregorio Honasan do not belong to a political family. The other candidates may not all be called dynasts, but their families have long roots in local or national politics: Marcos in the Ilocos, Escudero in Bicol, Cayetano in Taguig, Robredo in Naga. Recognizing this reality is only practical.

At the same time, the public shows some ambivalence about the issue. In abstract terms, many Filipinos may be said to be against political dynasties; but especially at the local level or on specific issues, Filipino voters continue to vote for members of political dynasties.

What, the Binay argument would have run if he had more time at the debate, is wrong with members of a family who want to serve at the same time in elective office? If Filipino culture prizes families of doctors or lawyers or architects, why not families of politicians, too? Besides, each member of a political family needs to get elected first, and that’s not always a certainty.

Current political conditions and public ambivalence on the issue make this argument a forceful one. But the concern of the youth is fidelity to the Constitution. If the Constitution says political dynasties must be prohibited, what would the next president do to make that happen?

Santiago could have pressed Binay on this point. Regardless of what the Vice President personally thinks about the matter, if he is elected president, he becomes the guardian in chief of the Constitution; it becomes his bounden duty to preserve and protect the founding law; and he becomes the chief guarantor for Article II, Section 26. What would he do, despite his own views on the matter, to make “equal access to opportunities for public service” a reality?