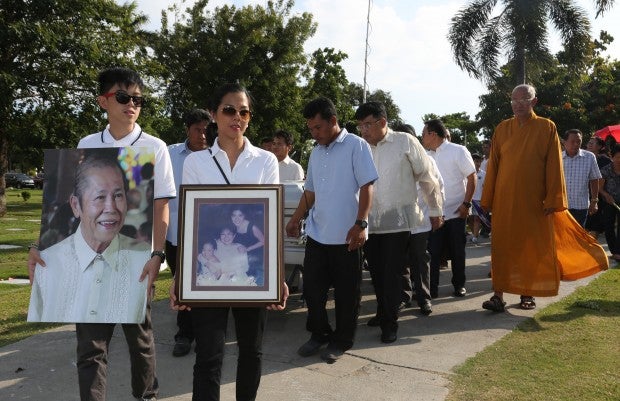 A FAMILY REUNITED Relatives and friends of Lauro Vizconde arrive at Manila Memorial Park in Parañaque City on Wednesday to bury him next to three members of his family who were murdered in 1991. JOAN BONDOC

The heart-wrenching story of Lauro Vizconde ended with his death the other week. Or did it? The man mainly remembered for the grisly fate of his wife and two daughters passed on without benefit of closure, the men convicted years ago of the murders having been acquitted and released from prison.

What came to be popularly known as “the Vizconde massacre”—the subject of two movies—has all the hallmarks of a Filipino tragedy. On June 30, 1991, Estrellita Vizconde, 47, and her daughters, Carmela, 18, and Jennifer, 7, were found dead in their residence in BF Homes, Parañaque. Combined, the three bore 49 stab wounds; little Jennifer had all of 19. The paterfamilias, Lauro Vizconde, was hastily summoned home by relatives from the United States where he had been working as a cook.

In the course of events the testimony of one Jessica Alfaro was deemed sufficient to bring rape and murder charges against eight men, scions of prominent families, who included Hubert Webb, a son of former senator Freddie Webb. Six of the accused—two were never arrested and remain at large—vigorously denied the charges at the Parañaque Regional Trial Court. Young Webb presented evidence that he could not have planned and carried out the murders as he was, he claimed, in the United States between March 1991 and October 1992.

In a much-scrutinized and controversial verdict, RTC Judge Amelita Tolentino convicted the six of the murders and sentenced them to life imprisonment. Webb and company appealed, and the Court of Appeals upheld the guilty verdict in 2005. The case was elevated to the Supreme Court in 2007.

There were some kinks in the procedures. For example, Webb petitioned for a DNA test to compare his semen with what was found in Carmela Vizconde’s body. It turned out that a DNA test could not be possible because the National Bureau of Investigation “could no longer produce” the semen sample.

There were interesting twists as well. At one point, Lauro Vizconde accused Senior Associate Justice Antonio Carpio of lobbying his peers for Webb’s acquittal. (Carpio had previously testified in court as a private lawyer that Webb was indeed in the United States when the crime was committed.) Vizconde would later claim that it was then Chief Justice Renato Corona who had told him about Carpio’s alleged lobbying, and that another justice in the high court said the Webb family had P50 million “lobby money” for an acquittal. The justices denied every accusation.

On Dec. 14, 2010, the Supreme Court ruled that the prosecution had failed to prove the charges beyond reasonable doubt and ordered the immediate release of Webb and company.

A heartbroken Vizconde would spend the next years filing motion after motion for reconsideration. The high court rejected each one. In 2011, or 20 years after the murders, the prescription period for the crime passed. Said Vizconde, who had continued to live in the house where his wife and children met their end: “The prescription period does not matter to me. It’s just a date. I’m still hoping for a miracle to happen. The fight is not yet over.”

But the miracle he hoped for never happened. He died last Feb. 13 at 77 after a series of heart attacks, and was buried next to his wife and children.

“The Vizconde massacre” is among the high-profile criminal cases in the country that remain open-ended. Countless other cases are unresolved, have gone cold, and are now fading from memory. What sticks out in the welter of memory is the inadequacy of the criminal investigation system. For example, no steps were taken to safeguard the crime scene, which was cleaned up, and bloodstained sheets burned, by people who were (or perhaps were not) ignorant of its importance in forensic inquiry. There were two confusing sets of suspects at one point. Biological samples simply disappeared.

Who killed Estrellita Vizconde and her daughters? Who are being haunted to this day by their piercing cries? It looks like this is one case that will fade to black with ringing questions left unanswered.