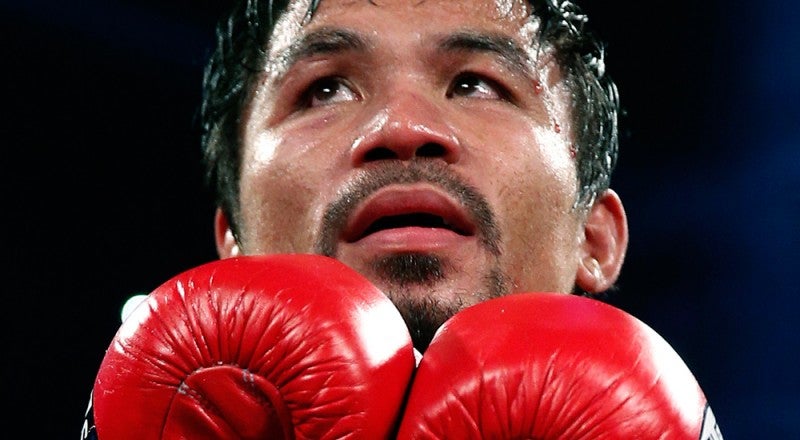 As bouts went, the knockout came pretty quick. Barely a week since he uttered his now-infamous remark on TV that gay people are “worse than animals” when they engage in same-sex relations (“mas masahol pa sa hayop” in more lacerating Filipino), the world as he knew it had come tumbling down on the world-famous boxer-congressman-preacher.

The blowback came swift and hard, with the country’s most prominent gay personalities, men and women alike, taking the lead to condemn Manny Pacquiao’s startling bigotry, joined by innumerable others, gay and straight, here and abroad, who found his comments appalling and a step too far. In the immediate aftermath, Pacquiao lost more than a million followers on Twitter and was dumped by global sportswear giant Nike, which called his remarks “abhorrent.” And the man was forced to apologize—awkwardly and obviously still missing the point—first on his Instagram account, then on radio.

The point, which many of his followers also fail to discern, or steadfastly refuse to, is not Pacquiao’s opposition per se to the idea of same-sex marriage. He has broached his disagreement with that prospect more than once, and he is not the first high-profile Filipino to do so. Politicians such as Lito Atienza and Tito Sotto, along with sundry bishops of the Catholic Church, have long railed against the possibility of such unions becoming a reality in the Philippines, especially in light of the bold strides made in the campaign for equality waged by gay people in other countries.

The United States was but the latest to recognize same-sex unions in 2015, following the progressive bent of other countries such as the Netherlands, Belgium, Canada, South Africa, Norway, Sweden, Iceland, Portugal, Argentina, Uruguay, France, Brazil, England, and even staunchly Catholic bastions such as Spain, Mexico and Ireland. The Philippines, meanwhile, has not even budged on its ban on divorce, making it the sole country in the world today without a legal recourse for couples to disengage from a marriage gone bad. Obviously, legislating same-sex marriage is an even more long-shot prospect, and Pacquiao’s basic and well-known opposition to it wasn’t what got him in serious trouble.

The more insidious part of his remarks was the mentality that informed his world view. Here was a congressman aspiring to be a senator, with the eventual power, if he does win (he is eighth or ninth in the latest surveys), to shape public debate and craft laws and policies that would impact on the lives of millions of ordinary Filipinos. His dismal performance in the House of Representatives should indicate the man’s capacity for the legislative grind: He reported for work only four times in 2014—the worst absentee record in the House for that year. Number of laws he passed: zero.

The only notable instance he took to the House floor was to oppose the reproductive health bill, and not with any coherent empirical or science-based argument, but with liberal quotations from the Bible. Meanwhile, according to a 2015 World Food Programme report, his constituency of Sarangani is one of the 16 poorest provinces in the country, with more than half of its families—54 percent—saying that, on some months, they went hungry once a day.

Pacquiao as a politician is terrible enough; his newfound religiosity—credited for turning his life around from rakish excess to the prayerful, Bible-based countenance he now wears—appears to have further confused him on the basic need for those in government like himself to separate their private religious beliefs from the requirements of the law and secular polity. While apologizing for his words, he defended the core of his argument by repeatedly invoking the Bible, as though ignorant of the fact that not all Filipinos are believers of it, let alone the fundamental, literalist interpretation to which he subscribes.

But if Pacquiao is to be senator, all Filipinos are to be his constituents, including the millions of gay people who stand at increased risk of further prejudice, discrimination, even violence from other people on account of a mindset that views them as less than human, as less deserving of the rights that those who are straight and who have never been in the minority take for granted—the right to love whomever they choose, for instance, and the right to build a life with that person under the equal protection of the law.

Because of who he is and what he wants to be, Pacquiao’s reprehensible words, and the world view behind them, carry grave consequences. He deserves to be thus reminded.