The dark heart of Asean 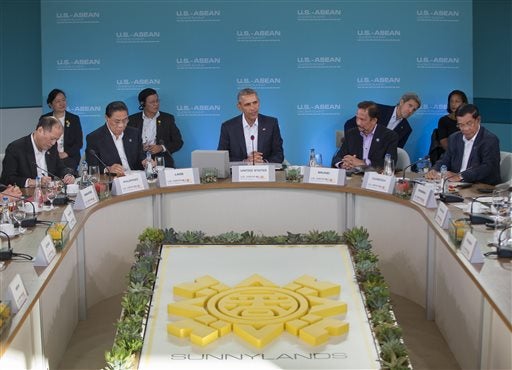 WASHINGTON, DC—In a two-day summit that starts today in California, US President Barack Obama will meet with the leaders of the 10 countries of Asia’s most important regional grouping: the Association of Southeast Asian Nations. The event, the first-ever US-Asean summit on American soil, is being touted as a sign of America’s growing interest in Southeast Asia. The question is whether the United States, by inviting all members of Asean, has allowed its interests to overwhelm its principles.

In many ways, this move toward closer relations makes a lot of sense.

For starters, tensions between several Southeast Asian countries and China are on the rise, owing partly to the fact that China has been acting increasingly assertive in staking its contested territorial claims in the region’s waters. Most recently, China decided to move an oil rig into waters claimed by Vietnam. A similar decision two years ago led to deadly anti-China riots in Vietnam.

And it is not just Vietnam that’s worried. Malaysia, Singapore and the Philippines are also trying to upgrade their navies and coast guards. Indeed, two decades after essentially tossing US forces out of local bases, the Philippines has welcomed back American troops as part of a new military cooperation deal.

Even countries whose economies rely on China are worried. China is Laos’ biggest aid donor and largest trading partner; yet Laos’ ruling communist party last month elected a new leadership reportedly devoid of any pro-China politicians. In Burma (Myanmar), which also depends heavily on Chinese aid and trade, the fear of becoming a Chinese satellite was a key reason its military junta ceded power to a civilian government in the early 2010s.

Beyond security challenges, the United States has a growing economic interest in Southeast Asia. Together, the Asean countries comprise America’s fourth-largest trading partner.

But there is one very serious problem with the upcoming US-Asean summit. Since the US pivot to Asia was launched in 2011, Southeast Asia’s political systems have, on the whole, regressed significantly. Over the last few years, Thailand has gone from flawed democracy to military rule, which could persist through 2018, or beyond.

Similarly, Malaysia appeared to be headed for a two-party democracy in 2011. Today, opposition leader Anwar Ibrahim is in jail on dubious sodomy charges; the government has passed legislation that essentially authorizes it to detain critics indefinitely; and Prime Minister Najib Razak remains embroiled in multiple economic and political scandals.

Cambodia, too, seemed like it had reached a political breakthrough after the opposition coalition nearly won the 2013 general election. But in the last two years, Cambodian Prime Minister Hun Sen has reasserted his political dominance. Opposition leader Sam Rainsy, fearing arrest, has fled into exile.

Then there is Burma. Although the Obama administration has touted the country as a shining example of democratic change, genuine democracy remains over the horizon. True, the longtime opposition party, the National League for Democracy, won last November’s general election. But the military still controls many ministries and a quarter of the seats in parliament. Moreover, civil wars are erupting along Burma’s borders, and gangs and other radical groups are slaughtering Muslims in the country’s west.

Laos, Vietnam and Brunei remain among the most repressive states in the world, with no evidence of political opening at all. And though democracy has advanced in Indonesia, the Philippines and Singapore, progress has been slow; in Singapore, the ruling party continues to dominate the political system.

Many factors account for the weakening of democracy in Southeast Asia. The region’s first generation of elected leaders, like former Thai prime minister Thaksin Shinawatra, often proved to be no more than elected autocrats who used their majorities to crush their opponents and suppress technologies that could be used as tools for change. Indeed, Thailand, whose online repression has increased under the junta, now blocks more than 100,000 websites from its citizens. Add to this the influence of China—hardly a force for democratic change—and Southeast Asia’s democratic regression is not particularly shocking.

What is troublesome is that the Obama administration has been reinforcing this damaging trend by bolstering ties with Southeast Asian autocrats. Obama has maintained close relations with Malaysia’s Najib (the two are reportedly golfing buddies). When Obama visited Malaysia last year, he barely mentioned Anwar’s imprisonment. The Obama administration also has been conspicuously quiet about abuses in Brunei, Laos and Vietnam, inviting the head of Vietnam’s Communist Party to Washington, DC, last July for a showy and warm visit.

In recent months, the Obama administration has begun to restore links with Thailand that were put on ice after the May 2014 coup, including by resuming a high-level strategic dialogue. Yet according to Human Rights Watch, “Thailand’s military junta tightened its grip on power and severely repressed fundamental rights” last year. And, so far this year, it has shown no signs of changing that approach.

The upcoming US-Asean summit will include leaders—like Hun Sen, who has ruled Cambodia for 25 years—who were previously considered too ruthless and repressive to be received by the US president on American soil. It seems that security and economic considerations have now usurped democracy as leading determinants of US foreign policy in the region. For the people of Southeast Asia, this approach may ultimately create more risks than benefits. Project Syndicate

Joshua Kurlantzick is senior fellow for Southeast Asia at the Council on Foreign Relations.

The wait for Hyun Bin: Behind the scenes