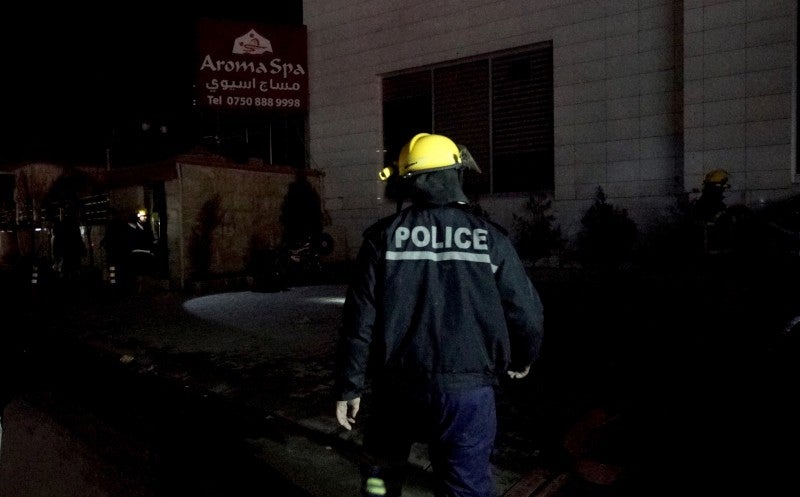 A police officer walks towards the scene of a fire in a hotel and adjacent massage parlor which has killed several people and injured others Friday, Feb. 5, 2016, in Irbil, capital of the Kurdistan region of Iraq. AP FILE PHOTO

The death of 13 Filipino women in a hotel fire in Iraq last week again underscores the desperate circumstances that overseas Filipino workers endure to support families at home.

The women were massage therapists at a hotel in Kurdistan; they died of smoke inhalation while trying to escape their basement workplace during the fire triggered by faulty wiring. Like the young single woman who started work only last October, most of the others must have been breadwinners who braved loneliness in a strange land and the very real risks of working in a war zone like Iraq, to find better-paying jobs unavailable to them here.

At about this time last year, single parent Mary Jane Veloso was facing death by firing squad in Indonesia, having been tricked into becoming a drug mule. A number of OFWs had been executed elsewhere for various offenses, and 88 others remained on death row all over the world as of April 2015, according to the Department of Foreign Affairs. Countless other OFWs have been maltreated, sexually abused, or driven to crime, news of which should have discouraged other potential labor exports, were not their needs so pressing and their options so painfully limited.

With thousands of OFWs and seafarers facing layoffs and bleak prospects as companies in the Middle East reel from plummeting oil prices, the problem of providing decent jobs for returning workers becomes even more serious. Is the Philippines ready to absorb them? Beyond the words, how will the presidential candidates address this daunting issue? Will each of them uphold the government’s longtime labor export policy?

The policy, started in the mid-1970s by then President Ferdinand Marcos as a way to cope with a moribund economy by sending out surplus labor, is cited as a significant factor to the country’s growth, with the 10 million OFWs sending more than $2 billion a month to their families at home. The steady flow of remittances from abroad has stimulated the economy and boosted consumer spending. In fact, a recent survey identified Filipinos as among the most confident and optimistic consumers in Southeast Asia, and its most willing spenders. The growth of malls and the rise of the condo market have been traced to the OFW phenomenon.

But consider the social costs of this labor export policy. Aside from exposing its OFWs to dangerous and deplorable working conditions, the Philippines is forfeiting its chance to compete globally in most fields, as it loses its skilled workers and best minds to better pay abroad. This loss of human capital is resulting in a shortage of skilled workers, especially in crucial sectors such as medicine, the sciences, education, and even in home management, master carpentry and plumbing…

The loss of the country’s productivity becomes cause for concern even more when one considers how most OFWs decide to work abroad during their prime—in their 20s and 30s—their most productive years that they could have better spent in their motherland.

Close family ties, always a source of pride among Filipinos, are another steep price paid to keep the remittances flowing in.  With household and service workers in constant demand abroad, female OFWs have flown out in large numbers in recent years, resulting in single-head households where material goods make poor substitutes for parental care and guidance.  Without the strong moral compass provided by the absent parent, the young become susceptible to drug addiction, delinquency, petty crimes, depression and psychological breakdowns.

Another unintended consequence that these modern-day heroes often realize too late is the culture of dependence they’ve created within their own family or community.  With steady remittances, needs are created and multiplied, and savings depleted, as families become accustomed to a luxurious lifestyle that their OFW kin had made possible. Too, children absorb wrong values anchored on material wants.

Yet, despite the steep social costs, the risks of abuse and the mortal dangers of war, working abroad remains an abiding dream among Filipinos who see the OFW labor policy as the solution to the country’s chronic unemployment problem. How to temper this dream, manage expectations, and offer viable jobs to a growing labor force is a formidable challenge for the next president.

Vice Ganda set to conquer digital world via own network?

FOCAP on junking of ABS-CBN franchise bid: We won’t flinch from this attack