Start of the ‘silly season’ 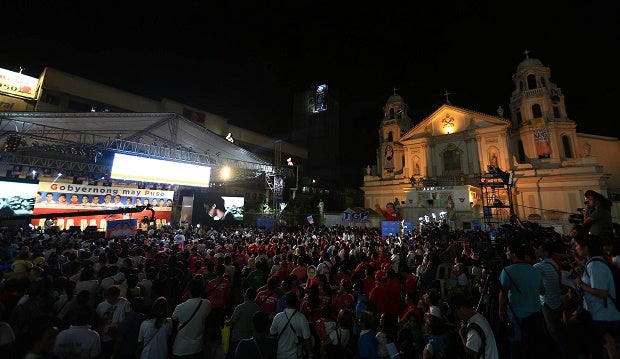 Grace Poe supporters gather at the Plaza Miranda in Quiapo, Manila before the kick off of national elections campaign. EDWIN BACASMAS/INQUIRER

Pundits have called it “the silly season,” the three months or so of the “official” campaign period where candidates—running for various positions from the humblest local office to the highest electoral post in the land—can now openly declare themselves as aspirants for a specific post and conduct campaign sorties.

Of course, the “silly season” began long before this week, what with some candidates campaigning years before. But yesterday marked the day all “horses” left the gate, so to speak, mouths metaphorically foaming and teeth champing at the bit, in a fervid race to the finish line.

In previous electoral exercises, excitement filled the air as the tracking of candidates’ performances and potential for winning began in earnest. This year, analysts say, the outcome is neither clear-cut nor irreversible. While Sen. Grace Poe in most news accounts is said to have “regained” the lead in the race, wresting the No. 1 spot from Vice President Jojo Binay, she is “statistically tied”—meaning she is still on even footing—with the other three front-runners: Binay, former interior secretary Mar Roxas and Davao Mayor Rodrigo Duterte. The fifth candidate, Sen. Miriam Defensor Santiago, who won just 8 percent of voter ratings in the latest Pulse Asia survey, is deemed too far away from the rest of the pack to pose a threat.

Then again, Philippine elections in the past have been marked by shockers, the latest being the “surprise” victory of Binay against Roxas in the 2010 race for vice president. As basketball pundits love to intone, in any game, especially politics, “the ball is round,” and even the seeming loser could still end up on top.

If only for keeping up the morale of supporters—especially of the crucial financiers—candidates and political parties minutely scrutinize the results of opinion polls like ancient seers peering at tea leaves.

Every point or glitch in the graph is analyzed and tracked and interpreted, with campaign directors plotting how to translate the views of interview subjects into winning slogans, TV-radio ads, viral social media postings, platform planks and talking points.

In this modern world, it is difficult, if not foolish, to seek the views of each and every voter. The opinion polls, then, serve as guidelines on the direction the winds are blowing, whether a candidate’s image and message are resonating with voters, or are falling or flat, or worse, turning off many. How the candidate and his or her campaign staff respond to the findings and redirect the thrust of the messaging spells the difference between a victor and an also-ran. But polls are not the only factor in a candidate’s eventual victory.

As pollsters have long pointed out, an opinion poll is nothing more than a “snapshot,” a moment in time captured by survey takers, a temporary measure of the public temperature. In coming days or weeks, the picture could change, and a candidate’s appeal to voters could heat up or cool down depending on many external factors.

Equally crucial factors in a political campaign are the performance of the staff and the organization, the efficient use of limited resources, and the reach of the machinery. In the Philippines, it is crucial for a candidate for national office to maintain ties to local officials, who, as the campaign nears the finish line, tend to concentrate their time and energies on their own bids for office. So it is crucial for the “big time” names to secure early on the loyalty of local candidates and convince them that their fate is tied to theirs. After all, it is the candidates for local positions who can make sure that supporters troop to the polls and that their votes are counted.

BUT the results of opinion polls are taken these days also as virtual endorsements of certain candidates. And they can indeed produce these results especially among voters who prefer getting behind a sure winner, making sure that their vote is not “wasted.”

But really, what is a “wasted” vote? Is it a vote for a candidate one believes in, but who has little chance of winning? As other commentators have reminded us, “good” candidates who do not enjoy as much visibility and recognition will certainly lose an election if voters looked only at their chances of winning.

Why is it so important for voters to support only those deemed to be “sure” winners? Is it because one wants to “feel good” when the votes are counted? But won’t you feel worse if you voted for the wrong person simply because you wanted to clamber into the winning bandwagon? Especially if the wrong person turns out to be corrupt, criminal and downright disastrous for the country? Wouldn’t it be better instead to feel that one did one’s best, with all good intentions?

As the silly season starts, let’s not get carried away and forget why we are voting in the first place.

Today, which is also Ash Wednesday in the Christian calendar, marks the beginning of two pilgrimage seasons in the Holy Year of Mercy.

The faithful are invited to make a pilgrimage, if not through the Holy Door in Rome, then in any of the designated Jubilee churches. In the Archdiocese of Manila, the Jubilee churches are: the Basilica of the Immaculate Conception (Manila Cathedral), Santuario de Santo Cristo Parish in San Juan, Archdiocesan Shrine of the Sacred Heart in Mandaluyong, National Shrine of the Sacred Heart in Makati, and Our Lady of Sorrows Parish in Pasay.

Pilgrimage-goers are issued a “passport” which will be stamped after each visit to a Jubilee church, with a certificate issued at the last church. Pilgrims are also asked to donate, in cash or kind, toward projects giving shelter to the homeless.