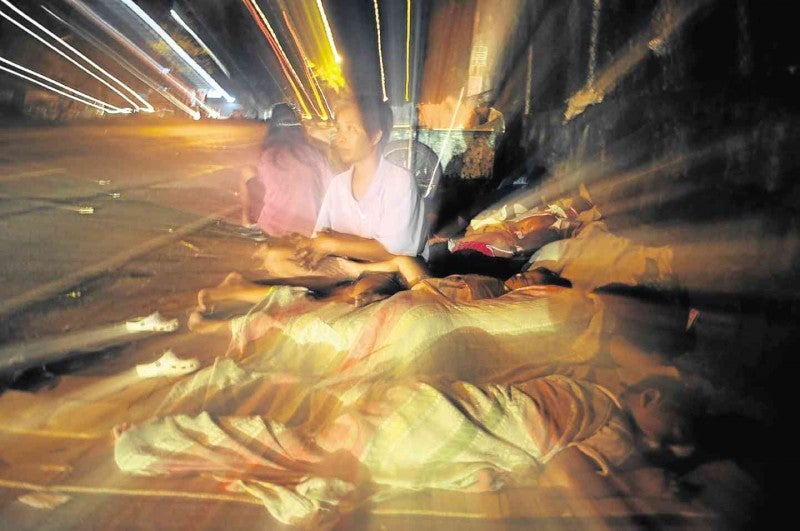 MERCEDES HERRERA, a mother of 11, spends Christmas Day on the streets for the past several years with her kids in Quezon City to receive food, money and toys from people. INQUIRER PHOTO

REPRODUCTIVE health (RH) advocates thought they had won the war when Republic Act No. 10354 was passed. It now turns out they have merely won another battle, and the protracted war to empower women and ensure that they are able to exercise their reproductive health rights continues.

Over the holidays, a few legislators, sitting in what is called the bicameral conference committee (bicam), practically sabotaged the implementation of The Responsible Parenthood and Reproductive Health Act (RPRHA) of 2012 by slashing P1 billion from the P1.157 billion provision for the procurement of “modern and natural family planning supplies” in the 2016 General Appropriations bill.

The P1 billion, RH campaigners said, would have been used mainly for the purchase of family planning supplies for poor women.

Spearheaded by Sen. Vicente Sotto III, one of the most vociferous opponents of the RH law, the budget reduction left RH campaigners stunned, unable to believe that a few—in this case, two, by their reckoning, including Sen. Loren Legarda, chair of the Senate committee on finance—could practically undermine implementation of the law they had fought for for a long time.

FEATURED STORIES
OPINION
Rewarding inefficiency
OPINION
Drop the Maharlika fund
OPINION
Who will be president of the Diliman republic?

The Reproductive Health Advocacy Network (RHAN) called the bicam’s action “arbitrary, unjust and callous.” It said the action “will thrust millions of women who want to plan their pregnancies into uncertainty and the likelihood of unplanned pregnancy” and could raise the number of abortion and maternal death. “It will also thrust millions of impoverished families into greater destitution,” they added.

Former Albay Rep. Edcel Lagman, lead author of RPRHA, said in a press conference called by women’s groups and other RH advocates, that the “tragic slash from an already small appropriation for family planning supplies violates RPRHA as a whole.”

Lagman said Section 2 of the law, which the Supreme Court already declared constitutional, mandated “the state to guarantee universal access to legitimate and quality reproductive health-care services, devices and supplies with priority to marginalized acceptors.”

Section 9 of the RPRHA, provided for the “inclusion in the Philippine National Drug Formulary of nonabortifacient, legal and medically safe hormonal contraceptives, intrauterine devices, injectables and other family planning products and supplies,” Lagman said.

By causing the budget to be reduced, Sotto, who failed to prevent the passage of RPRHA, is blocking the successful implementation of the law, according to Lagman.

Sen. Pia Cayetano said what happened at the bicam should concern all legislators.

Cayetano, one of the legislators who pushed for the approval of RPRHA, said the issue was not only about family planning but also about procedure, ethics and how Congress did its work. She said it was unethical that the “tragic slash” was made without informing the legislators concerned.

During the bicam, she said, the information relayed to the senators on the floor was very different from the final outcome of the General Appropriations Act signed by President Aquino.

“I feel we were duped,” she said. The senators could not vote responsibly without accurate and adequate information. “The bicameral report is supposed to report the significant changes. And P1 billion out of family planning is significant.”

She said the 2013 National Demographic and Health Survey estimated that of the 25 million Filipino women of reproductive age, 5.684 million who were 15 to 49 years old, had no access to modern family planning services and supplies.

The reduction in the budget for the purchase of supplies would worsen the problems of unwanted pregnancies, high maternal death rates and abortion, among others, said Cabral, chair of the national implementation team on the RPRH law.

The “tragic slash” apparently happened because the RH champions were not savvy enough to realize that the battle in the legislature did not stop when a law was passed.

Lagman called attention to the power wielded by the bicam, a body composed of representatives from the Senate and House of Representatives tasked with reconciling and making more acceptable proposed legislation to both chambers.

As defined, the committee is “a temporary panel composed of House and Senate conferees which is formed for the purpose of reconciling differences in legislation that has passed both chambers.

“Conference committees are usually convened to resolve bicameral differences on major and controversial legislation. (It) settles any differences in the two bills, then sends the final bill to both houses.”

But the committee apparently does more than reconciling differences. Lagman said “it is effectively the third chamber” of the legislative body and there was always horse-trading involved and one-on-one negotiations between members, particularly chairs of committees.

Benjamin Diokno, former budget secretary and a professor at the University of the Philippines School of Economics, wrote in his column for another paper in 2013 that the “powerful” bicam had become more secretive and opaque” over time.

His description of what happened in committee meetings reflected what Lagman said about horse-trading and one-on-one negotiations. “During most bicameral committee meetings, decision-making was delegated to the heads of the House and Senate contingents. While this ‘four-eyes only’ arrangement facilitates decision-making, it shows lack of transparency in the second-to-the-last step in the authorization phase of the budget process …. Often, the bicam has gone beyond reconciling differences between the House and Senate versions of bills,” Diokno said, a statement that RH campaigners would agree with wholeheartedly. 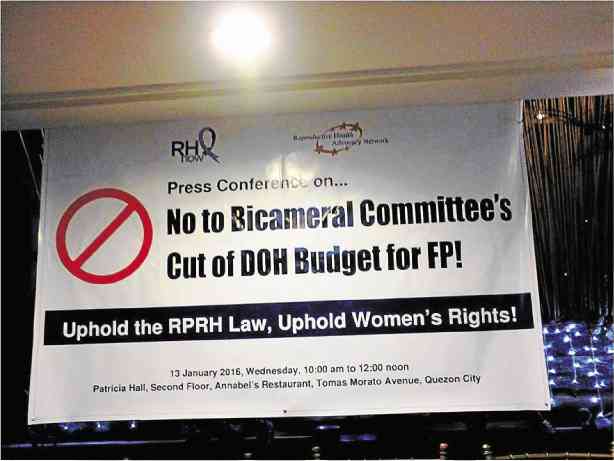 AGAINST the P1-billion cut from the budget allocation for family planning supplies. CONTRIBUTED PHOTO

When the bicam submitted its “reconciled” version, Diokno said, “At this stage of the budget authorization phase, no individual amendments to the report may be entertained. The legislator either votes for or against the report.” He added that he did not know of any instance when the committee report was rejected by the two chambers.

Former Health Secretary Enrique Ona said the bicam process was “most important” so it was crucial for RH advocates to have had somebody monitoring the work of the committee.

Lagman lamented that the RH coalition had failed to monitor the congressional process. “We rested on our laurels. RH advocates laid down their arms,” he said.

Former Sen. Leticia Ramos-Shahani said “we (RH campaigners) let our guard down.” She said the timing of the release of the bicam report was “suspicious,” as it was right after the holidays, and described the budget slash “an act of treachery.”

She urged the RH campaigners “to pay attention when the [proposed] General Appropriations Act is being debated. You have to understand the process … You have to fight until the last battle. Be interested in the process. Be patient. Don’t be too emotional. Hope for the best but prepare for the worst.”

Lagman said that by causing the reduction in the budget for the purchase of family planning supplies, Sotto was blocking the successful implementation of RPRHA.“Central to the implementation of the law is the provision of contraceptives, especially to the marginalized,” he said. There could be no law if supplies were not provided.

He said the 2016 budget for the purchase of supplies was even lower than in previous years when there was no RPRHA.

RH advocates did not find Legarda’s and Sotto’s explanation for the cut reasonable. Legarda reportedly said the Department of Health (DOH) was slow in using its 2015 budget. But the RH campaigners said the statement was based on the half-year, January-June, performance. By December, the DOH had almost used up its budget for the year for the purchase of contraceptives.

Moreover, Cabral pointed out, “In general, all unexpended or unobligated portions of the budget of a department are reverted to the National Treasury (although) there are certain exceptions. For example, the President can approve a realignment of the unexpended/unobligated funds.”

Sotto justified his action by saying the Supreme Court had issued a temporary restraining order (TRO) against contraceptives. But the RHAN said the TRO covered only injectable implants and these were not included in DOH’s budget request. “The TRO does not prevent the purchase of other family planning commodities,” it said.

Lagman said, by slashing the budget, the bicam “deprived women of their right to self-determination.”

Former President Fidel V. Ramos said, “The huge budget cut is a disservice to the poor,” adding that the people deserved an explanation from the bicam for the action.

Cabral said women and their families should stand up for their rights and stop being victims. They should use their votes as important weapons to get back at those “who thwart what is the law of the land.”

She urged them not to vote for those who “subvert your reproductive health rights.” She expressed the hope that women would finally flex their political muscle and show candidates there was true women power.

Shahani added that women should vote for those who supported the RH law.

As for the bicam, Diokno, in what seemed to be a foreshadowing of the current controversy, said it “should be made transparent and accountable for its decisions. Its rules and procedures should be reformed, made open in order to limit its clout, enhance its fiscal accountability and improve the overall integrity of the budget process.”

He said there should be minutes of the proceedings of the committee and they should be printed and circulated to members of both houses of Congress before a vote was called on the bicam report.

The mandate of the bicam to reconcile differences in House and Senate versions of the appropriations bill should be limited, Diokno said. “During the period of reconciliation, no new budgetary item (program, project and activity) and provision may be introduced. At the same time, should the Senate concur with the House version in its entirety, there should be no need for a bicameral conference committee.”

He also suggested that bicam deliberations be open to the public.