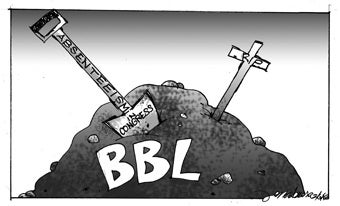 Mindanao, no stranger to crisis and instability, is enduring yet another series of unfortunate events these days.

It has just lost the opportunity to turn a corner in its bloodied history with the proposed Bangsamoro Basic Law having been left twisting in the wind by Congress. Judicious consideration of the proposed law, however imperfect it was in form, would have sent the signal to Muslim Mindanao that the government in faraway Manila is serious about addressing the historic ills and issues at the root of the conflict that has rended parts of the region for decades now. Instead, Congress’ unseemly inaction on it—despite the Aquino administration enjoying a healthy majority in the “Lower House”—once again dashed the hopes, and reinforced the cynicism, of many Muslim Filipinos who must feel they can never get a fair deal, let alone a fair hearing, from the status quo.

And the BBL debacle comes at a time when rolling blackouts due to a lopsided power generation system and to a series of bombings targeting transmission towers have become a normal occurrence in Mindanao, disrupting the local economy and the ordinary lives of citizens. Another burden has become acute in the last year or so—the El Niño phenomenon, which the United Nations had earlier warned could be the strongest and most intense in the last 50 years. The severe heat has depleted water sources in vast swaths of Mindanao, ravaging farms and affecting the food supply.

Of the 32 provinces identified by the Philippine Atmospheric, Geophysical and Astronomical Services Administration (Pagasa) as most likely to be most impacted by the dry spell, nine are in Mindanao—Zamboanga del Norte, Zamboanga del Sur, Zamboanga Sibugay, Southern Cotabato, Sarangani, Sultan Kudarat, Basilan, Maguindanao and Sulu. The dire effects of El Niño on such provinces is magnified by the fact that they are also among the poorest provinces in the country, and thus more vulnerable to disaster and famine.

Last month, the Maguindanao provincial board declared a state of calamity in the province as the ruinous effects of El Niño on local agriculture reportedly reached P150 million, with 30 towns out of 36 reporting particularly heavy losses. Some 10,000 farmers have seen their lives and livelihoods ruined. And it’s not just the extreme heat; the prolonged dry season has also led to a rat infestation that has wreaked havoc on more than 800 hectares of corn and rice fields.

According to an online report by MindaNews, South Upi in Maguindanao is already facing famine; the indigenous people living in the uplands have been forced to scrounge for “kayos” (wild yam) to feed their families, despite the crop being poisonous. Wells have dried up, and corn and palay fields have wilted to uselessness. Meanwhile, the same double blight of drought and rat pestilence has also hit North Cotabato; the local government placed the province under a state of calamity after its crop losses topped P240 million. Kidapawan City is in the same straits, reporting some P30-million damage to more than 266 hectares of farmland.

Cloud-seeding operations by the Department of Agriculture appear to have had minimal effect. While scattered rains have been reported in Sultan Kudarat, Koronadal City, North Cotabato and Sarangani, the induced rainfall has not been enough to blunt El Niño and bring relief to affected areas. Pagasa has said the extreme weather could last until May, by which time the conditions in the afflicted towns and provinces might already have tipped over into full-scale catastrophe.

This is the time for the government to compensate for its egregious failure to do right by Mindanao with the nonpassage of the BBL, and this it can do by harnessing all technical and humanitarian resources at its disposal to help the region cope with El Niño. In April last year, the agriculture department released about P250 million to fund projects intended to help thousands of affected farmers in Central Mindanao and the Autonomous Region in Muslim Mindanao.

Have any of those projects taken off and lent some measure of alleviation and comfort to their intended beneficiaries? Have the DA, the social services department and the disaster agencies done any follow-up relief efforts to bring humanitarian assistance, at the very least, to the hungriest and most desperate of families, now that the drought has only gotten worse and appears to be not easing anytime soon?

War, warlordism, poverty, strife, and now famine and extreme weather brought about by climate change—Mindanao badly needs a break, and a helping hand.

Carpio idea vs ‘trolls’ welcomed, but…