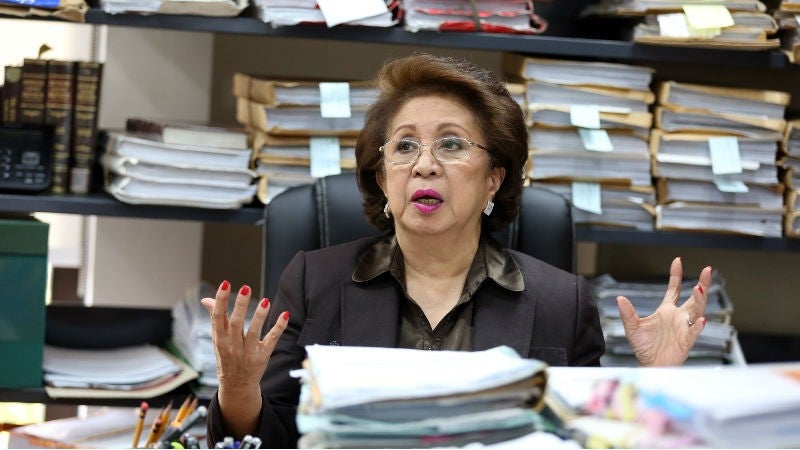 The fight has been taken to the beast, but the beast has not yet been vanquished or tamed. Conchita Carpio Morales is by far the fightingest of the country’s ombudsmen, with dramatically higher conviction and solution rates, but she is the first to recognize that though corruption may be a wounded animal, it is far from dead.

There is still a “super” number of corrupt officials in the government, Morales told the Inquirer.

The exclusive report by Tarra Quismundo presented an overview of the problem:

“Corruption remains prevalent in the government, Morales said, noting that her office had received thousands of complaints about graft and corrupt practices and other administrative violations.

“Most of the new cases filed last year involved local officials, a total of 1,092, while police officers accounted for more than 600 cases.

“Other officials who faced investigation by the Ombudsman include those from the military and the education, finance, natural resources, justice and agriculture departments, as well as state universities and colleges, and the fire protection and jail management bureaus.”

And yet Morales, with her team of dedicated lawyers and staff, has achieved much higher solution rates (defined as the percentage of cases “dismissed, forwarded to the courts, or resulted in administrative penalties” out of the Office of the Ombudsman’s total caseload). Beyond its double-digit conviction rate, the Office of the Ombudsman has also managed to pursue plunder charges against three incumbent senators and a host of other active government officials.

Why are the number of corrupt officials and bureaucrats still at “super” levels?

Part of the answer must lie in the sheer size of the government. A thought experiment: If each of the Ombudsman’s total caseload of 11,000-odd cases had been filed against only one official or bureaucrat, without any duplication in the identities of the respondent, the number would represent less than 1 percent of the government workforce of 1.3 million. But it is common knowledge that some officials or government employees face multiple graft or plunder charges; this means that the total number of government officials or employees facing cases at the Office of the Ombudsman must be even smaller.

Considering that many Filipinos continue to report personal encounters with corrupt officials, a caseload representing less than 1 percent of government employees must be seen as still low. Even given the record low of 32 percent of Filipino managers who said they had personal knowledge of a corrupt transaction with the government (in the 2014/2015 Social Weather Stations Survey of Enterprises on Corruption), we should still expect the Ombudsman’s total caseload to continue growing despite Morales’ high-profile successes against the corrupt.

Part of the answer must also lie precisely in those successes. If an Ombudsman can pursue cases against the most powerful opposition politician in the Senate, or two popular actor-senators, the ordinary Filipino who has personal knowledge of a corrupt transaction may be emboldened to file a case—instead of, say, spreading the news on social media. Lost in the cycle of recrimination and counter-recrimination over the alleged corruption in the Arroyo administration and the Aquino administration’s aggressive pursuit of plunder and graft cases against Arroyo officials is the sense or sentiment first given voice by a witness in a Senate hearing early in the Aquino term: Complaints have been heard, and cases filed, precisely because the change in administration gave the complainants and petitioners hope. The same dynamic must be at work with the Ombudsman’s caseload.

But shouldn’t the Aquino administration’s vaunted “daang matuwid” mean fewer corrupt officials, fewer encounters with corrupt transactions, fewer acts of corruption? Not everyone on the President’s team is on the same page. But even assuming that “daang matuwid” as a reform program is entirely successful, reform is not the answer to human nature.

Systemwide change is. Yes, it begins with the election of officials of integrity, as Morales said. But greater transparency, higher standards of accountability, simplified government processes, better pay: These are all part of the tedious, practical, non-super answer.

Lorenzana defends decision to terminate UP accord: ‘Times have changed’

Duterte to senators after Norway deaths: You want Pfizer vaccine? We’ll order for you

Lorenzana defends decision to terminate UP accord: ‘Times have changed’

Trump sought the world’s attention and got it. Now the White House reality show ends