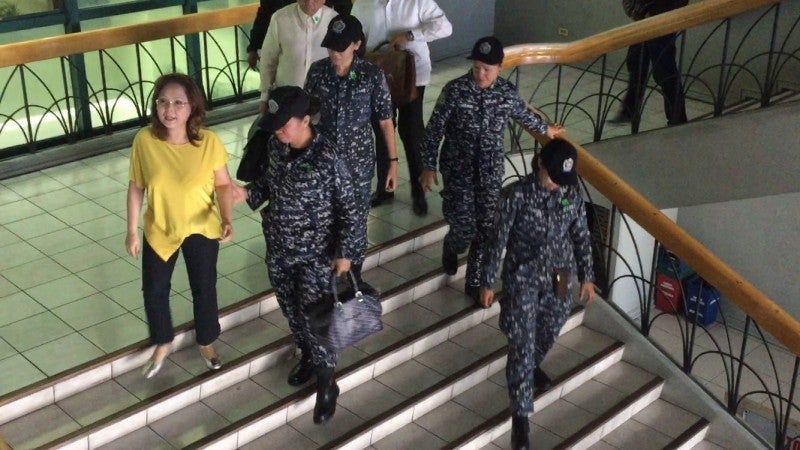 THE OTHER day, after the hearing on her trial for plunder at the Sandiganbayan, lawyer Jessica Lucila “Gigi” Reyes appeared to lose the control and imperturbability that had marked her demeanor ever since she was arrested and incarcerated for alleged involvement in the pork barrel scam. As she was being led out of the Third Division courtroom by her female escorts, Reyes espied Inquirer reporter Marlon Ramos, who had taken note a day earlier that the longtime senior aide of Sen. Juan Ponce Enrile had attended the opening of her trial “carrying a pricey Goyard handbag and wearing Tory Burch designer shoes.”

That apparently incensed Reyes, who, when she saw Ramos taking pictures of her, broke away from her guards and confronted him. “Yes? Yes? I’m here. Take a picture,” she said in a raised voice, according to Ramos’ own account. Then, a man later identified as Reyes’ younger brother, Patrick Jean Gonzales, went up to Ramos, grabbed his arm and said: “Pati ba naman yung bag? Naman. (You even wrote about the bag?) Why did you have to include that in your story? Inquirer ka, eh (You are from the Inquirer)!”

But why not? The bag happened to be a Goyard, one of the priciest luxury totes around, easily a six-figure purchase. Any reporter worth his salt who’s covering a corruption trial involving huge sums of public money and where the appearance of wealth is an essential part of any possible case—hence the lifestyle checks on public officials as mandated by law, on pain of charges of unexplained wealth—would know to keep his nose up for the telltale detail.

Unfortunately for Reyes, Ramos is a resourceful reporter who immediately noted the irony in the sight of a former chief of staff of a former Senate president—paid with taxpayer money and now in the dock on charges of graft and plunder—showing up for her trial apparently still with the chutzpah to flaunt her affluence by toting a luxury bag. Worthy of a picture, indeed.

Does the Goyard prove Reyes’ guilt? Of course not. It does, however, raise questions about her wealth, and the means by which she acquired it, right when she stands accused as an alleged principal in conspiring with Enrile and Janet Lim Napoles of skimming some P172 million off the senator’s pork barrel allocations. Given the nature of the charges against Reyes, did her lawyer perhaps forget to advise her that the optics of her showing up in an antigraft court wielding a pricey tote would not be in her best interest?

Or perhaps she didn’t care? Was that show of nonchalance her way of saying that she knew better than to take this trial seriously—that, sooner or later, all this inconvenience would peter out and go nowhere, like many other high-profile cases in this country?

Waiting it out appears to be the common game of everyone involved in this case. Reyes’ court appearance last Wednesday, along with Napoles, marked only the first day of their trial proper for plunder—over 18 months since the Office of the Ombudsman filed charges against them and an initial batch of other government officials and private individuals implicated in the pork barrel racket. You’d think anyone accused and languishing in jail would want their trial speeded up. But no: Napoles actually protested the twice-a-week hearings set by the court.

Ruby Tuason, an old friend of Enrile, Reyes and Napoles, has already testified before the Ombudsman that she acted as a middleman in facilitating kickbacks from Napoles’ camp, which ran the scheme that funneled pork barrel funds to bogus nongovernment organizations and to the offices of Enrile and another senator, Jinggoy Estrada. The recipient of the money intended for Enrile, according to Tuason, was his powerful chief of staff, then often called the “25th senator” for her alleged influence in the name of her boss.

Reyes “picked it up personally in my house or in a restaurant where we agreed to meet,” according to Tuason’s affidavit. “Atty. Gigi Reyes would pick-up the money alone. I remember occasions when Senator Juan Ponce Enrile would join us when we were almost done, for a cup of coffee.”

However seemingly unambiguous those allegations are, they are only the starting point. It’s still a long slog ahead, not only to see these plunder cases through to their conclusion, but, more crucially, to keep them in the public eye long enough for the justice system to do its job. The country cannot afford to lose interest and once again forgive in a jiffy—or the thieving will simply never stop.