Legislators thinking of themselves in pushing SSS pension hike 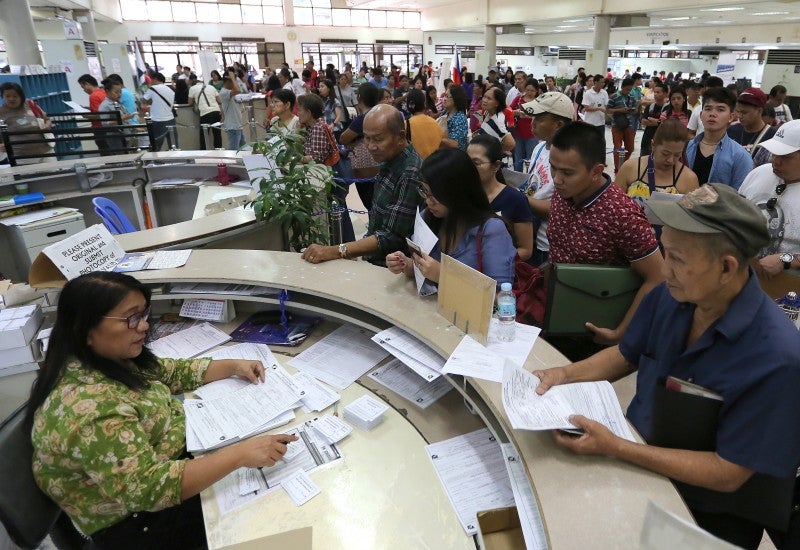 House Bill No. 5842, or the proposed Social Security Act, would give our private-sector pensioners an across-the-board increase of P2,000 in their monthly pensions. All 2.15 million of them. What’s wrong with that? It would be great for the pensioners, right?  And moreover, think of the political bonanza it would give to the authors and sponsors of the bill in the respective chambers of Congress, in an election year even.

But take a closer look at it, do a little arithmetic, and you will realize that our legislators were (as usual?) thinking of themselves rather than the country. And they were willing to let the pensioners bask in false hopes for a while, betting that President Aquino would not dash those hopes in an election year.

Their bet failed. The President has vetoed the bill. Only consider: How much will that bill set the Social Security System back yearly?  P2000 x 13 months (Christmas bonus) x 2.15 million pensioners = P56 billion. Yearly. That was easy, wasn’t it?

Next question: How much does the SSS earn from its investments? Yearly? It gives a range of from P30 to P40 billion a year (last year it was P40 billion). So do the arithmetic. The shortfall of the SSS will be anywhere from P16 billion to P26 billion.

So how will the SSS finance that deficit or shortfall? If the SSS takes it from the principal or its corpus, then it will be only a matter of time before it bellies up. Estimates range from 11 years to 14 years. Is that what we want? And think of the pensioners who will still be alive by then. From very little pension to no pension at all.

But doesn’t the SSS collect premiums from current members? Why can’t that be used? Oops, sorry. The SSS has things like salary loans, sickness and disability payments, and help for members who have suffered from disasters and catastrophes. In other words, there are other members that the SSS has to take care of: Membership estimates run to over 30 million, or if we take out the pensioners, 28 million. Their needs also have to be attended to. And those members will be put at risk with this pension increase of HB 5842.

So the question is: Didn’t our legislators know about this when they were studying the bill? Of course they did. Certainly, the SSS must have told them, and given them all the actuarial estimates. I understand that the SSS told them that a P500 across-the-board increase would be affordable, as long as it is accompanied by lower benefits to current members. But a P500 pension increase wasn’t “bongga” enough, and may not assure election or reelection.  So the legislators probably thought (the media reported some of it): “We’ll provide for P2,000. Never mind the impact on SSS long-term financial viability, because the President surely will bring it down to P1,000, rather than veto it. We’ll still come out smelling like roses, because we can blame him for lowering the pension increase.”

In other words, they were leaving it up to the President to worry about the financial viability of the SSS. They were playing a political game.

Let’s continue with the thought processes of those legislators: “Anyway, the impact of our (irresponsible) actions now will be felt much later. Public memory is very short. And besides, the future governments will not let the SSS go down. They will save it.”

Well, how much will that “save” cost? That, too, has been estimated by the SSS. A government subsidy (covering the difference between SSS revenues and expenditures) would amount to P130 billion in 2028, and rising by an additional P20 billion a year. Think of the opportunity costs of that money: Which items of competing expenditures would be foregone by the government to save the SSS? And when we talk about a government subsidy, let us remember that it is the Filipino people who are paying for it. But, of course, that’s 14 years from now.

Which gives rise to another question: Is that the kind of political leaders we want? Who think only of the short term, and think only of the benefits to themselves?  Just listen to what they are saying now: How heartless is P-Noy, how cruel, how lacking in compassion, his fear that the SSS will go belly up is a “phantom fear,” he should give it as a gift to the Filipino people to commemorate Edsa.

Good grief. Look at the facts, the numbers. Ignoring them will not make them go away.

And the speed with which the bill was passed! By the way, the only legislator who voted against the bill was Sen. Juan Ponce Enrile. Good for him.

I will say this, however. I think the President should have allowed the P500 across-the-board increase, that being what the SSS had suggested in the first place. Instead of vetoing the bill outright. Perhaps he was tired of playing “chicken.”

Again, there’s no “magic” in it. It’s simple arithmetic. Government employees contribute 9 percent of their income every month to the GSIS. The private-sector employees contribute only 3.63 percent of theirs to the SSS. What’s more, that 3.63-percent contribution is subject to a maximum P15,000 of income, while GSIS members have no such ceiling; they pay 9 percent on total income. The government contributes 12 percent of income as its contribution, so the total is 21 percent. In the SSS, employers pay 7.36 percent, so the total is 11 percent. If the private sector wants larger pensions, it should contribute larger amounts.  Truth hurts.

The future of the country’s power sources: How renewable and clean energy can sustain the next generations

Duterte participating in UN General Assembly for the first time