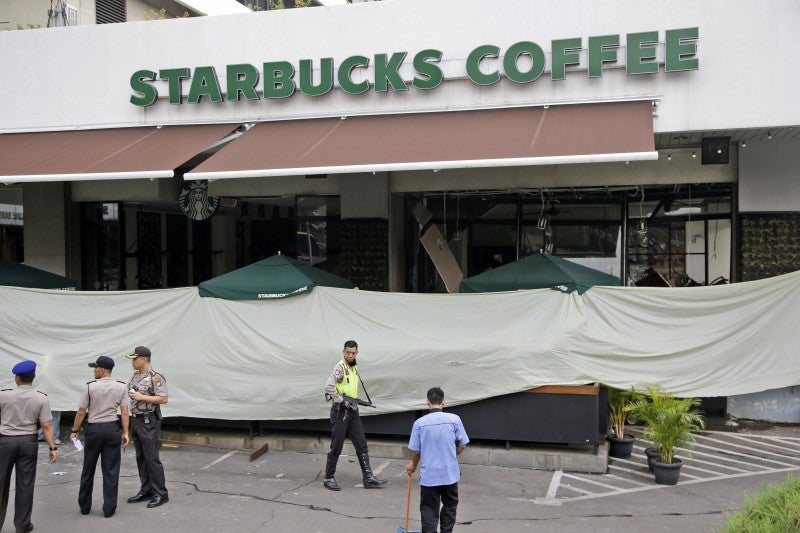 Police and officials gather in the parking lot outside the damaged Starbucks cafe where Thursday’s attack occurred in Jakarta, Indonesia, on Jan. 15. A day after attackers detonated bombs and engaged in gunbattles with police in the central part of Indonesia’s capital, Jakarta tried to get itself back on track. AP

Amid a terrorist attack in Jakarta on Thursday, an American news agency showed surprise that Southeast Asia has Starbucks and McDonald’s stores.

Suicide bombers and gunmen brazenly attacked central Jakarta mere hours after US President Barack Obama used his final State of the Union address to Congress to reaffirm that to attack Muslims as a religious group betrays fundamental American values.

An Associated Press report published around the world was strangely headlined, “Jakarta attacks in busy area filled with Western brands.”

Its lead sentence read: “Thursday’s deadly attacks in Jakarta were focused on a Starbucks in the center of the Indonesian capital, in an area filled with offices and Western brands.”

The report went on to highlight that a shopping mall near the attacked Starbucks had a McDonald’s and “other Western-style restaurants,” and was “popular among Indonesians and foreigners alike.”

The report was published everywhere, from the United States to the Middle East to the Philippines.

We Filipinos would wonder what the fuss over “Western brands” was, given the area attacked loosely resembles a street in our Makati financial district.

I now wonder how the average American pictures a Southeast Asian city, but Koreans do not highlight how New Yorkers use Samsung phones.

An Indonesian friend just protested on my Facebook wall that the area is better described as one with many government offices. I am glad she is safe and letting out steam at the AP’s expense.

TechinAsia.com noted Facebook’s Safety Check was never heard from during the attack.

It recalled comparisons of reactions to recent Paris attacks and wrote: “Like Lebanese citizens after the attacks in their capital, many Indonesians today asked themselves, ‘Hey Facebook, where’s our safety check?’”

Instead of highlighting that our region has Starbucks and McDonald’s stores and its people do not live in trees, I wish the international media emphasized that the world’s largest Muslim country just suffered an abominable assault that may have been inspired by the Islamic State (IS) group.

In Indonesia’s most tragic terrorist attack in 2002, 202 died in a Jemaah Islamiyah (Islamic Congregation) bombing in the resort island of Bali. If one walks along Sydney’s Bondi Beach today, one still sees a large seaside mural memorializing the 88 Australian victims.

In 2015, one of the bombers, a Malaysian, was finally killed in a Philippine marsh, at the cost of 44 of the Philippines’ bravest police commandos’ lives.

We are not afraid

We and the world must see the scars terrorism has left far beyond New York City and Paris. It chills me to remember that I have walked past that Starbucks.

But if evil knows no religious, geographic or political borders, neither should hope.

We must not forget that our heroes in Mamasapano made the ultimate sacrifice to prevent atrocities like what just took place in Jakarta and to secure our region beyond just our country.

We must thus join our Asian Muslim brethren in proclaiming, #KamiTidakTakut (“We are not afraid”).