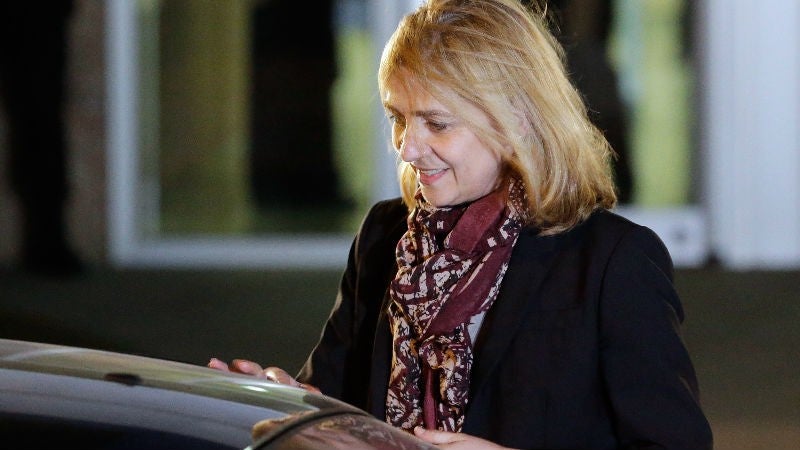 Spain’s Princess Cristina leaves a makeshift courtroom on the first day of a corruption trial, in Palma de Mallorca, Spain, Monday, Jan. 11, 2016. Spain’s Princess Cristina will make history as the first royal family member to face criminal charges since the monarchy was restored in 1975. She is accused of tax fraud related to a company she owned with her husband that allegedly helped fund the couple’s lavish lifestyle. (AP Photo/Emilio Morenatti)

Modern-day Spain is learning to subject its royal family to the sometimes inconvenient consequences of the rule of law. Would that royal families in the Philippines—royal in all but name—were subjected to the same.

Princess Cristina of Spain, daughter of the first king of Spain’s restored monarchy and sister of the second, has been accused of tax fraud—and on Monday became the first royal since the restoration in 1975 to face criminal charges.

It is possible, indeed even likely, that the three-judge court will dismiss the case against Cristina. As The Associated Press reported, her lawyer “was joined by a prosecutor and a state attorney representing Spanish tax authorities in saying the charges against Cristina should be thrown out because government officials agreed she had committed no crimes and should face at most an administrative tax for tax evasion.”

But the symbolic nature of Cristina’s appearance in court was not lost on Spain, or on Europe. The princess, once sixth in line to the Spanish throne, spent 12 hours at the courthouse on Monday. She and her husband, who has been accused of embezzling millions from government contracts, kept their silence during the long opening day of the trial.

They tried to remain impassive, but the Spanish court had its share of antic-ready Oliver Lozanos. One lawyer tried to summon the former king, Juan Carlos, and the current king, Felipe, to testify—to which, as the AP reported, “a prosecutor accused him of trying to turn the trial into a reality show.”

In a way, it already was. Pictures of the princess sitting on a courthouse bench were broadcast widely; antimonarchy protesters made themselves felt; and the couple had to leave under tight security, “hours after sunset, with the princess appearing to give a slight smile as she departed.”

Cristina’s husband is in a tighter fix; unlike her, he cannot enjoy the privilege of dismissed charges. That all but ensures that, as the trial resumes in February and runs possibly until June, embarrassing details of their life in luxury, allegedly financed by illegal schemes, will be reported regularly and in full—at a time when Spain continues to suffer from economic uncertainty and extremely high unemployment.

The fact that the case against Cristina even reached the first day of the trial is already a legal milestone; the Spanish monarchy was restored by Generalissimo Francisco Franco in part to serve as the source and symbol of national unity. For most of his tenure, Juan Carlos proved to be the appropriate choice. He abdicated in 2014, however, because of the burden of recent royal scandals—including his own decision to go on an expensive elephant hunt at a time of economic hardship for his citizens.

Under Felipe, Cristina and another sister were stripped of their positions as official members of the royal family; Cristina herself has largely kept in hiding, failing to appear in any pictures with the new king. For many in Spain, seeing her in court was the final shock.

Would that the same conditions operated in Spain’s former colony. But here in the Philippines, someone like Imelda Marcos, who reigned for years as one-half of the so-called conjugal dictatorship, can face some 300 lawsuits and still not end up behind bars. While Cristina’s fate has tarnished the legacy of her father and poses a vexing problem for the reign of her brother, Imelda’s sensational ways have failed to dampen local or regional support for her and her family.

And it’s not just Imelda. If you are impoverished, you are clapped in jail; if you are rich and powerful, a member of one of the country’s royally privileged families, you are presented two options: house arrest or hospital arrest. Naturally, no arresting officer will say it outright; no prosecutor will make the argument; and no judge will confirm it.

But, as the saying goes, the rich are different from you and me. Too many, in the Philippines, use their money to avoid the equalizing inconveniences of the rule of law.

Pepito intensifies further as it moves closer to Aurora

Velasco says he was ‘ostracized’ during Cayetano leadership

‘Proud of you all’: Vice Ganda, Luis Manzano show support for past ABS-CBN artists in other networks