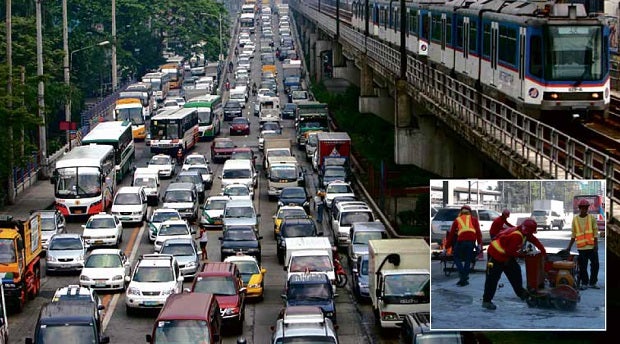 METRO Manila’s traffic crisis did not arrive like a thief in the night. It has been predicted by several studies—stretching back to the 1980s.

Very few of the things needed to avoid the crisis got implemented in the past two decades. While cities in other parts of the world managed to follow the “ideal trend” by investing in their transport infrastructures on time, if not ahead of needs, Metro Manila procrastinated. As a result, infrastructure supply is woefully short of travel demand.

Metro Manila is beyond the critical zone, with daily commute time of 90 to 150 minutes, and a cost of P2.4 billion a day (more than 10 percent of the gross regional domestic product). Recovery will be at huge costs and sacrifice.

The rapid increase in motor vehicles is the most obvious culprit, which administration apologists like to tout to mask its own omissions.

In the last five years, about 450,000 vehicles were added—60 percent of which are motorbikes and 17 percent, cars. In the same period, as in the previous decade, very few infrastructures got built.

Most of the 5,285 kilometers of existing roads are at saturation levels. Daily vehicle volumes are above the roads’ capacities.

Edsa, for example, has a capacity of 200,000 vehicles a day on ideal conditions (freeway conditions, minimal road side frictions, no at-grade intersections). When the volume nears capacity, speed plummets. Average speed on Edsa now is about 10 kph.

Hourly traffic distribution has also flattened. There is little difference between peak and nonpeak hours.

The fact is when there are 3,000 vehicles, it would take more than three hours to negotiate a lane of road that can only handle 1,000 cars per hour. You cannot squeeze water from stone. Neither can the Metropolitan Manila Development Authority (MMDA) perform miracles and raise road capacities beyond their physical limits.

From Aparri to Jolo

While the road network of Metro Manila is inadequate, its density (lane-km/sq km) of 7.4 is higher than that of Singapore (4.8). If rearranged in a straight line, these roads would make two four-lane expressways from Aparri to Jolo!

If all the motor vehicles are parked in single file, they would easily fill up one of the two expressways.

An estimated 18 million trips are made daily by 13 million people. This excludes walking.

The historical trend, however, is ominous. Car trips grew 3.3 percent per year from 1996 to 2012 compared with 2.2 percent for trips by public transport.

Over the next five years, an additional 1.8 million daily trips would need to be borne on the various transport modes. How can they be accommodated?

The National Economic and Development Authority, with the help of the Japan International Cooperation Agency, crafted a Roadmap for Transport Infrastructure that would banish traffic congestion by 2030. A bold plan, indeed, as it also implies effective management of urban land use and expansion to Regions 3 and 4.

It is a tall (if not impossible) order. Its key strategy is to shift travel demand to railways—from the current 6-percent to 37-percent modal share of the trip markets. To do that, more than 160 km of new rail lines will have to be built, aside from additional urban expressways three times more than what we now have.

Although adopted officially as a joint game plan for the Department of Public Works and Highways, Department of Transportation and Communications, and MMDA, the prognosis for its realization is bleak.

The capacity to implement is the main obstacle, rather than money. Short-term projects like expansion of Light Rail Transit (LRT) 1, LRT 2, Metro Rail Transit (MRT) 3 and Philippine National Railways commuter are already delayed by three to five years. Road projects are buffeted by right-of-way issues and prevalence of NIMBYs (not-in-my-backyard) resistance.

Besides, if all the projects are constructed in order to meet the 2030 deadline, massive traffic disruptions across the metropolis will occur.

Over the next five years, expect the December traffic to become the new normal. An additional 750,000 vehicles would jostle for limited road space.

Just to remain at the current road density, we need to add 2,000 lane-km of roads. That is not going to happen even if we try.

The supply-demand gap would, therefore, widen. The best that could happen is for the following projects to come on stream by 2020:

39 km of new rail lines (LRT 1-CEP, LRT 2 extensions and MRT 7) plus upgrades to three existing rail lines. That is nearly a 50-percent improvement over the current state but only about 10-percent market share.

Upgrade and expansion of the coordinated traffic signaling system. Double the number of intersections under computer management.

Since additional supply of transport infrastructure will still be woefully short, the only recourse left is to tinker with the demand side. Reduce demand, and/or increase road throughput in terms of more people per lane per hour, rather than more vehicles.

A 25-percent improvement in bus productivity can translate into 240,000 car trips avoided a day. A similar achievement for jeepneys means another 500,000 car trips

While not requiring big money, these measures will demand investment in management resources, political will and community spirit. Two paths are available. One is painful and the other is less painful. Painful if forced by circumstances. Less painful if transformed into a serious program led by government.

The traffic congestion can also be ascribed to Metro Manila being an “imperial” capital. A primate city. About 36 percent of the country’s economic output is concentrated in a land area less than 1 percent of the total. Political and economic power attracts people like moths to a lamp.

On the basis of rank-size distribution of cities, the Philippines is only slightly better than Thailand. The United States, Germany and Malaysia are far better with their next largest cities not too far behind.

There have been proposals to create regional growth poles and encourage countryside development. But these were mere shibboleths devoid of systematic action. A federal form of government may succeed in reducing Metro Manila’s primacy without really trying as in the case of the United States, Germany and Malaysia.

(Rene S. Santiago is president and CEO of Bellwether Advisory Inc., a consulting firm focusing on infrastructure, and natural resource and risk management. He was involved in four studies on Metro Manila’s transport and traffic system: MMetroplan in 1975 when he was with the government, Metro Manila Urban Transport Strategy Planning Project in 1984 as a consultant, MMUTIS in 1997 and the 2013 Transport Road Map for Greater Metro Manila.)

To solve Manila’s traffic woes — a subway system, anyone?