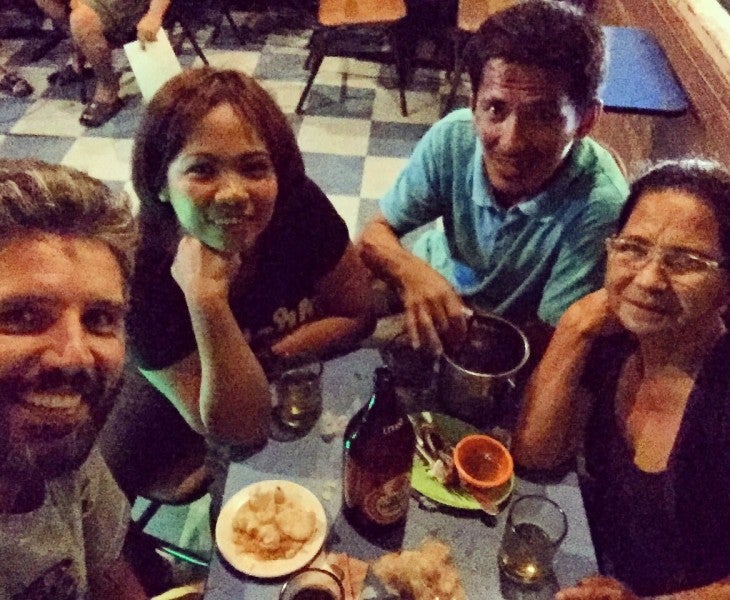 SELFIEWITHATIVANGANG Luís Simões, a Portuguese artist, is shown having beer with members of a gangwho allegedly drugged him and divested him of his belongings. Simões managed to take this selfie with the three of the five robbery suspects using his phone. CONTRIBUTEDPHOTO

There’s a vicious face to the Philippines’ vaunted hospitality, and it was displayed in its leering best in the reported case of a Portuguese artist visiting the country and documenting the highlights of his trip through his sketches. Befriending the visitor, local people assumed to be members of a gang skilled in deceit and robbery went through the familiar paces and divested him of a debit card from which as much as P40,000 was found to have been withdrawn.

Luis Simões, 36, gave up his job at a TV station in his native land in 2012, sold all that he owned, and began to travel the world, sketching as he did so. He has visited 36 countries in Asia and Europe—mostly a pleasurable experience, until he got to Manila.

On Dec. 22, members of the infamous “Ativan Gang”—so named because of the drowsiness-inducing drug they use on their marks—found Simões in the vicinity of the Manila Cathedral and gave him the works. Two women introduced themselves to him and eventually he went with them to a bar in Pasay City. “I felt there was sympathy and a good vibe,” Simões was reported as saying. “They seemed so friendly and nice. You wouldn’t suspect they had bad intentions.” He was plied with food and drink and a man who said he was a cousin of the women kept refilling his glass while they enjoyed the videoke. As the evening wore on the artist struggled to keep awake. He was taken to a van where he noted the presence of another woman and a man before he lost consciousness.

Simões came to in a Makati hostel. It was reported, surprisingly, that he still had his phone and camera from which the apparent perps had tried to erase the photos he had taken of them. He was able to recover a selfie. He made his way to a police station to report the crime. The P40,000 was found to have been withdrawn from his debit card when he was unconscious and before he could block the account.

There are so many things reprehensible in this crime but one stands out: It uses the hospitality for which Filipinos are known worldwide as a tool for malfeasance. Another tragedy is that this case is hardly unique; other foreigners have been similarly targeted, perhaps by the same group.

Earlier in December, a Spanish economist working in Manila, Jose Pedro Bosch, 44, was walking around Rizal Park. He was invited to a bar by a man who was soon joined by two women and another man. He was made to board a taxi where he was given a beer, and he quickly passed out. He awoke in a Malate hotel. His losses: 600 euros (some P32,000) from his wallet and 181 euros (over P9,000) from his debit cards. In June 2014, Japanese tourist Tadashi Yoshitome lost 200,000 yen (P86,000) in the course of the same modus operandi in Binondo.

(Other criminals with different styles have been busy as well. In August, a businessman from the United Arab Emirates lost P170,000 in cash to female pickpockets, known as the “Sex Bomb Gang,” in Ermita, Manila. Crooked cabbies—on the frontline of welcoming tourists—have been known to overcharge passengers by taking them on circuitous routes around the city. It gets worse: In 2014, two Danish women flagged down a taxi to take them to a spa just a kilometer away. The cabbie demanded P1,500, and when the women refused to pay, threatened them with physical harm.)

The unfortunate thing is that the authorities themselves seem helpless in addressing the issue: The victims, even if they report their experience, “will no longer pursue the case because they have to leave the country,” said a police investigator. Thus do the Ativan Gang and other lowlife go their merry way, with hardly a threat to their survival. But shouldn’t the state, with its resources, take it upon itself to go after these criminals? The Portuguese Simões’ selfie with the apparent perps should help move things forward. Otherwise, why should it be said that it’s “more fun in PH”?

Making visitors feel safe is central to making the Philippines a favored tourist destination. Manila has irretrievably lost a possible repeat customer in Simões, who said he had no desire to come back. “I just saw a truth about Manila,” he said. “Since that day, giving trust and finding pleasure in dealing with new people has been lost. Manila gave me the worst experience of easily trusting people and accepting their help in a genuine way.” Ouch.