The gaze of the Nazarene 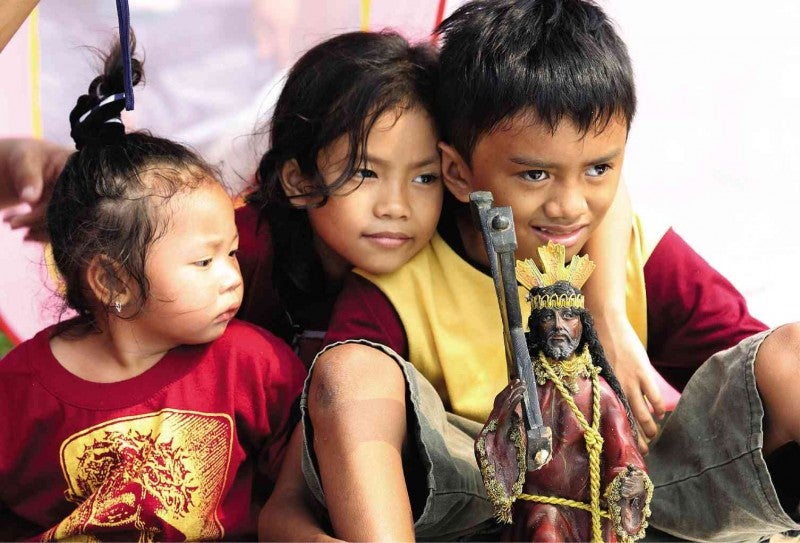 STARTING ’EM YOUNG Children carrying a miniature replica of the Black Nazarene join thousands of devotees gathered at Quirino Grandstand for the scheduled Mass and procession today, the Nazarene’s feast day. Heavy traffic is expected as more followers are anticipated to crowd around the carriage bearing the life-size statue of Jesus Christ. JOAN BONDOC

Pity poor John the Baptist, patron saint of Quiapo Church, ever upstaged by the cousin whose swarthy image his church has hosted for 249 years. On no other day is he more forgotten than on Jan. 9, when the Black Nazarene draws millions into a rowdy procession, the traslación, that clogs the urban arteries between the Luneta and Quiapo Church.

Some Catholic virtuosi may be less equable about the colossal increase in traffic and the apparent decrease in the official Church’s power during the traslación. It may embarrass them to have Catholicism epitomized in the media by an immense mob jostling to get near the image, flinging towels and handkerchiefs to be rubbed on it, vying for them as they are flung back, often spurred by a magical intent to secure talismans or personal material favors.

In turn, some Nazareno devotees have little use for the official Church. In 2009, worshippers impatient to start the traslación interrupted the Mass at the Luneta prior to the procession, ignoring the pleas of Gaudencio Cardinal Rosales, then archbishop of Manila, to allow the liturgy to finish. In 2010, a traslación aficionado, tour guide Carlos Celdran, protested the Church’s campaign against the reproductive health bill by disrupting an ecumenical service at the Manila Cathedral.

Thus the devotion to the Nazareno, while sponsored by the official Church, is a site of conflict between mainstream Catholicism and unschooled or idiosyncratic popular piety. The official Church has long wrestled to bring it into greater conformity with authorized Catholic teaching and worship.

But more recently, the official Church has also tried to learn from its practitioners.

Fr. James H. Kroeger, MM, of the Loyola School of Theology, discusses some of these efforts in a case study written for an ecumenical Consultation on World Christian Revitalization Movements, under the auspices of the evangelical Asbury Theological Seminary in the United States.

The case study is yet to be published. I may not say more about it now than that Nazareno devotees and skeptics alike will benefit from reading it. But part of the case study was based on a paper published on the Quiapo Church website, which can be cited without qualm.

The paper’s author, Msgr. José Clemente “Clem” Ignacio, Quiapo Church’s parish priest until 2015, started out as a young Nazareno skeptic. His sharpest childhood memory of the devotion is of being mortified by his mother’s walking on her knees up the aisle of Quiapo Church while he begged her to desist from such unseemly conduct.

Decades later, as the church’s pastor, Monsignor Clem grew to appreciate the Christian fellowship and deep trust in God that he witnessed in many devotees, even those with tenuous ties to the official Church. He felt humbled by “the faith of the simple people.” He began to understand their need for a physical connection with the divine, through contact with the image and objects associated with it—as one might cherish the touch of a loved one’s hand, or things a loved one has used.

Monsignor Clem’s altered perspective is backed by decades of papal teaching. Paul VI said of popular piety in 1975: “It manifests a thirst for God which only the simple and poor can know…. It involves an acute awareness of profound attributes of God: fatherhood, providence, loving and constant presence… When it is well oriented, this popular religiosity can be more and more for multitudes of our people a true encounter with God in Jesus Christ” (“Evangelii Nuntiandi,” #48).

Benedict XVI called popular piety “one of the Church’s great treasures,” through which “the faith has taken flesh and blood,” “entered human hearts and become part of the common patrimony of sentiments and customs, shaping the life and emotions of the community” (Letter to seminarians, Oct. 18, 2010). Francis now sees in it “the manifestation of a theological life nourished by the working of the Holy Spirit who has been poured into our hearts,” and asks that the Church “approach it with the gaze of the Good Shepherd, who seeks not to judge but to love” (“Evangelii Gaudium,” #125).

Jesus with the loving, nonjudgmental gaze was not a religious hierarch, but a prophet of popular piety, speaking to crowds much like those of the traslación and feeling their anguish. Many Filipinos live in wretched circumstances, with little relief from the government, from civic organizations, from families and communities broken by the pressures of contemporary life, from the official Church. Those who turn to the Nazareno turn to the only one they can trust unreservedly. How would Jesus look at them?

Monsignor Clem suggests he might look at them as at the “vast crowd” in Mark 6:34: “His heart was moved with pity for them, for they were like sheep without a shepherd; and he began to teach them many things.”

Or as he looked at the woman with the hemorrhage in Luke 8. Not planning on being a disciple, she just wanted desperately to be cured, and believed his power was so great she had only to touch his cloak as he moved through the crowd. “Daughter,” he told her, “your faith has saved you; go in peace”—an incomplete faith, but enough for him to work with.

Jesus’ gaze would see the hordes of devotees not as superstitious idolators, but as suffering individuals called to discipleship. I think his cousin, that other prophet of popular piety, poor neglected John the Baptist, would agree.

Eleanor R. Dionisio is an associate director of the John J. Carroll Institute on Church and Social Issues.