Rizal for President: Can he win? | Inquirer Opinion

Rizal for President: Can he win? 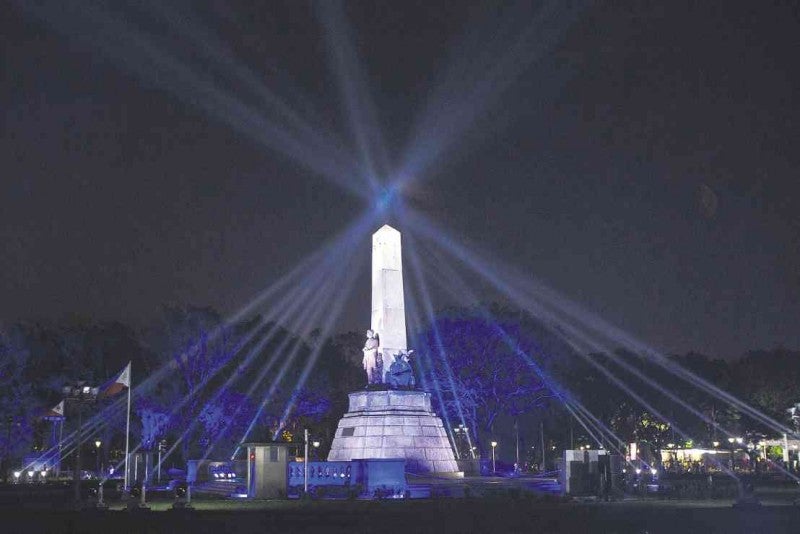 HERO REMEMBERED A lights display at Rizal Park brightens up the night for the commemoration of Rizal Day today and for the New Year’s Eve celebration. JILSON SECKLER TIU

With the presidential election coming up in 2016, the nation weighs the frontline candidates against each other in coffee shop debate that is sometimes reduced to the absurd when someone throws Jose Rizal into the equation to leave all the presidential candidates wanting by comparison. Tinimbang ka ngunit kulang (You’ve been weighed and found wanting).

Presuming that Rizal is alive today, if he is not declared a nuisance candidate, and if he has the money and machinery to mount a national campaign, what are his chances of winning? While Rizal has an enviable name recall and is revered as the national hero, will people vote him into Malacañang?

Textbook history tells us that there was once a Filipino propaganda paper in Spain called “La Solidaridad” (Solidarity) that ran from 1889 to 1895 in a futile attempt to campaign for reforms in the colonial Philippines.

Graciano Lopez Jaena was the first editor, succeeded by Marcelo H. del Pilar, who became both editor and publisher in December 1889.

What is swept under the rug of textbook history is the disagreement in the way Del Pilar managed “La Solidaridad,” sometimes referred to by the affectionate nickname “Sol” (Sun). A move for changes in editorial policy caused a split in the Filipino community that required the election of a “responsable.”

This resulted in pitting “Rizalistas” or Rizal and his supporters, against “Pilaristas,” those allied with Del Pilar. From experience we know that elections tend to bring out the worst in Filipino nature, and this goes way back to our Founding Fathers.

While Rizal enjoyed the respect of his countrymen in Spain, this was far from unanimous. According to Del Pilar, who recounted what transpired in a letter to

Deodato Arellano, the assembled Filipinos discussed the rules and agreed that a leader be elected by a two-thirds majority. When the votes were cast:

“…The majority required was not secured. Rizal and I were the candidates. The balloting was repeated three times with the same result, and Rizal and I parted with the greatest cordiality, so much so that he told me that, since the balloting would be resumed the next day, it would be advisable for us to join in voting for a third person so as to avoid the formation of factions, to which I agreed.

“The balloting again took place in the afternoon of the following day; I had to go out and could not be present, so I authorized Naning [Mariano Ponce] to vote and make any agreements for me. On my return home I found the following news: that on the first balloting a majority had once again been lacking; that in view of this Naning conferred secretly with Rizal, proposing a coalition third candidate recommended by the two opposing parties; that Rizal without accepting or rejecting the proposal, replied that he was going abroad to work by himself because there was no unity possible where there were two Filipinos; that the balloting took place a second time, and again failed to produce a decision; that in view of this, Rizal counted the votes in his favor in everyone’s presence and said: ‘Well, I see that I have 19 friends in the colony; goodbye, gentlemen, I am going to pack my bags, see you later,’ and, seizing his hat, went off.

“Since Naning had instructions from me to prevent my election, he conferred with those whom he knew were voting for me and asked them for the sake of harmony to make the sacrifice of changing their votes to favor Rizal. Dominador Gomez, once this agreement had been made, took the floor and announced that his party desired harmony in the colony and were ready to sacrifice their votes in favor of Rizal’s candidature. The balloting was then repeated and Rizal was elected.”

Rizal saw himself as the moral leader of the Filipinos in Spain and was encouraged in this belief by partisans in Manila, who sent funds for the publication of “La Solidaridad” and offered him editorship of the paper.

He declined in 1889, saying he was busy researching in the British Library and working on his annotations to the 1609 book “Sucesos de las islas Filipinas” (Events of the Philippine Islands) by Antonio de Morga.

Friends who urged Rizal to challenge Del Pilar’s leadership set him up for a major disappointment. Del Pilar, de facto leader of the Madrid group, would not yield his position as well as editorial control of “La Solidaridad” to Rizal easily.

Three inconclusive ballots one day in February 1891 show that neither Rizal nor Del Pilar had a clear majority. Next day, after two more inconclusive ballots, the Pilaristas delivered their votes in favor of Rizal, only for Rizal to refuse on the grounds that he demanded unanimity.

In his letter to Arellano quoted above, Del Pilar claimed he did not want to be elected yet his actions spoke louder than his words because he refused to withdraw nor yield his votes to Rizal.

On the other hand, Rizal kept threatening to leave Spain and the Reform movement to complete his second novel “El Filibusterismo” but he did not withdraw or deliver his votes to Del Pilar, either.

This is a clear case of mixed signals and the Filipino trait of saying something but meaning another—jele jele bago quiere—of making an outward show of humility to fish for compliments or support, of saying he wants to leave when he actually wants to be asked to stay.

This minor episode in Philippine history is a glimpse into Filipino election behavior; it makes us ask ourselves: Rizal for president? Maybe not.

One thing is certain, though. If Rizal were alive today, his idealism, his seriousness, his sharp pen, would get him shot in the Luneta all over again.