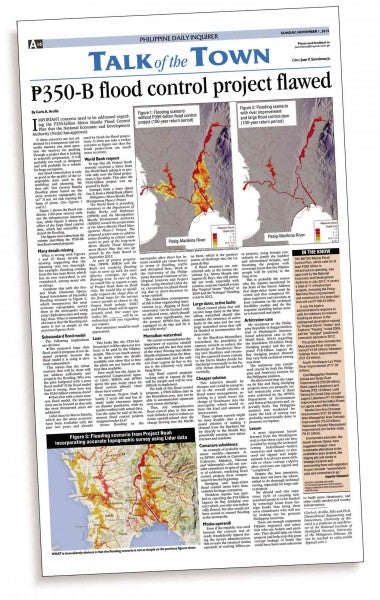 Nov. 1 issue of the Inquirer’s Talk of the Town

(Editor’s Note: UP Professor Carlo A. Arcilla’s article, “P350-B flood control project flawed,” which appeared in this section on Nov. 1, drew reactions from readers and the heads of the Department of Public Works and Highways [DPWH], National Economic and Development Authority [Neda] and Project Noah [Nationwide Operational Assessment of Hazards.] For the sake of fair play, Talk of the Town is running the side of the DPWH and Neda after printing the reaction of Project Noah Executive Director Mahar Lagmay on Nov. 29.)

We wish to clarify some of the concerns raised by Professor Carlo A. Arcilla, director of the National Institute of Geological Sciences, University of the Philippines Diliman, regarding the Flood Management Master Plan for Metro Manila and Surrounding Areas.

To begin with, the master plan was prepared from February 2011 to February 2012, via a technical grant from the World Bank-Australian Agency for International Development (AusAID) under the Global Facility for Disaster Reduction and Recovery Trust Fund, mainly to establish a road map/vision for a sustainable and effective flood management in Metro Manila and surrounding areas (Laguna, Rizal and parts of Bulacan), after experiencing the damage brought about by Tropical Storm “Ondoy” and Typhoon “Pepeng” in 2009.

Structural and nonstructural measures were formulated and prioritized according to: 1) severity of floods based on flood risk, flood area, duration of floods and flood damage; 2) technical viability; 3) social and environmental viability at preliminary level; and 4) aerial distribution of putting priority on the flood mitigation measures for rivers and Laguna Lake, which is envisioned to be implemented until 2035.

These measures are still subject to validation of individual projects through a comprehensive feasibility study and detailed design that can either be financed using Philippine government funds or requested under Official Development Assistance.

The Lidar (light detection and ranging) data, which was provided to the government through the assistance of AusAID, was not yet available when the master plan study was undertaken. The flood inundation analyses used for the study were based on accumulated data and information from which a credible digital elevation model was derived. These include:

Topographic map with a scale of 1/5,000 with one meter contour interval for the National Capital Region, taken from the Earthquake Impact Reduction Study for Metro Manila (2004) by the Japan International Cooperation Agency with the Metropolitan Manila Development Authority and Philippine Institute of Volcanogy and Seismology

Topographic maps of the National Mapping and Resource Information Authority

River survey of Pasig-Marikina-San Juan Rivers in 2000, updated under the study.

The two figures (1 and 2) referred to Arcilla’s article are meant to illustrate the magnitude of flood inundation along the Pasig-Marikina-San Juan Rivers that could be reduced with and without the proposed flood control projects only along the river system.

In contrast, Figure 3 from Project Noah, which does not show the level of rainfall event, also shows the extent of urban drainage in the western part of Metro Manila. These are not shown in Figure 1 since that was not the purpose of the illustration and was not due to a substandard simulation model. The master plan study prepared separate models for such urban drainage events.

The flood simulation models employed in the study are commonly used in flood modeling in developed countries, like the United States and Australia, to name a few, as well as in the Philippines.

Further, they were combined as an integrated inundation model expressing the present and future flood conditions of Pasig-Marikina-San Juan Rivers and Laguna de Bay.

We can assure Arcilla and the public that the digital elevation model linked to the simulation model has enabled us to come up with a master plan that presents a clear vision or roadmap to address flood management issues in Metro Manila and its surrounding areas.

The latest topographic and hydrological data and design standards will be used during the design preparation, which is why we constantly try to cooperate with partners like Project Noah to avoid the need to duplicate work.

This is the reason behind the request from the World Bank for the latest information from Project Noah to be used in preparing designs for the modernization of drainage pumping stations in the city.

Regarding the problems of drainage systems in Metro Manila, the Department of Public Works and Highways (DPWH) has worked since the 1950s and already invested much for the construction of pumping stations in the 1970s.

We agree with Arcilla that any comprehensive flood control plan must include a way to reduce extreme rainfall-related river discharge into the Marikina River where it flows through Metro Manila.

The reason for this is not necessarily to reduce the discharge in Laguna de Bay as implied in the article (most of the inflow into Laguna de Bay comes from its large catchment and not from Manggahan Floodway), but to ensure that the flow through the Pasig-Marikina River is in line with the available flow capacity and to avoid overtopping of the river in cities like Marikina.

Any excess flow during extreme rainfall events would have to be temporarily stored in a flood management reservoir upstream of the city. Thus, the master plan proposes a high dam in Upper Marikina.

Under the master plan, a hydrological analysis was made and the reservoir was sized to capture the upstream river discharges for a rainfall event that occurs with the scale of once in 100 years.

The master plan has also studied the use of the reservoir waters as a much-needed additional source of water supply for Metro Manila. It is, therefore, certainly not true as stated in the article that flood measures would be constructed only at the lowest elevations, i.e. Metro Manila and Laguna de Bay.

We are also well aware of the active Marikina East and West Faults. Many large dams in the world have been constructed on active faults and there is great knowledge and experience available for this. The proposed dam design will consider the best design standards and will be based on the necessary seismic and structural analyses that will be undertaken during the feasibility study and detailed design stage of the project.

Using the price level in 2011, the construction cost of the proposed dam is estimated at approximately P10 billion and not P200 billion as stated in the article. The large dam collects the rainfall runoff in the area of 280 kilometers2 within a reservoir area of 5 km2, which is a relatively small part of the overall catchment area.

There was no dredging work in the Camanava (Caloocan, Malabon, Navotas and Valenzuela) project. The works mainly include construction of pumping stations and floodgates as well as embankment of polder dike and river dike, and the land subsidence was likewise incorporated into the project design.

The Laguna Lake Dredging Project is one of the components of the Laguna de Bay Rehabilitation Project, which is an action project of the Department of Environment and Natural Resources (DENR) River Basin Control Office, proposed to be financed by the Belgian government. The DPWH was not involved in this proposed project.

Notwithstanding the above, we would like to emphasize that the DPWH has implemented several large-ticket infrastructure projects, flood control projects in particular, that have undergone technical vetting beforehand.

We have also been informed by the World Bank that any study financed by the agency, including this master plan, is subjected to an internal peer review process in which the results of a study are vetted and confirmed by senior bank specialists and management.

Further, pursuant to President Aquino’s program of sustained growth and poverty reduction, the DPWH has adopted strategic policies for an effective flood control program, including priorities that will have clear social outcomes based on prudent and efficient selection of projects (national and local) with measurable social and economic benefits especially to the marginalized.

Prepared and submitted to the Office of the President proposed Water Sector Restructuring Plan adopting an integrated water resources management approach in a convergence program with the Department of Agriculture, Department of Agrarian Reform, National Irrigation Administration and DENR

Use bioengineering solutions for slope protection works in road and flood control projects, such as “coconets” and geosynthetic materials, which are less expensive and more environment-friendly.

We intend to bring in the best national and international expertise to make sure that the best solution is implemented for each intervention to improve the living conditions of millions of people in Metro Manila, who are affected on a regular basis by flooding.