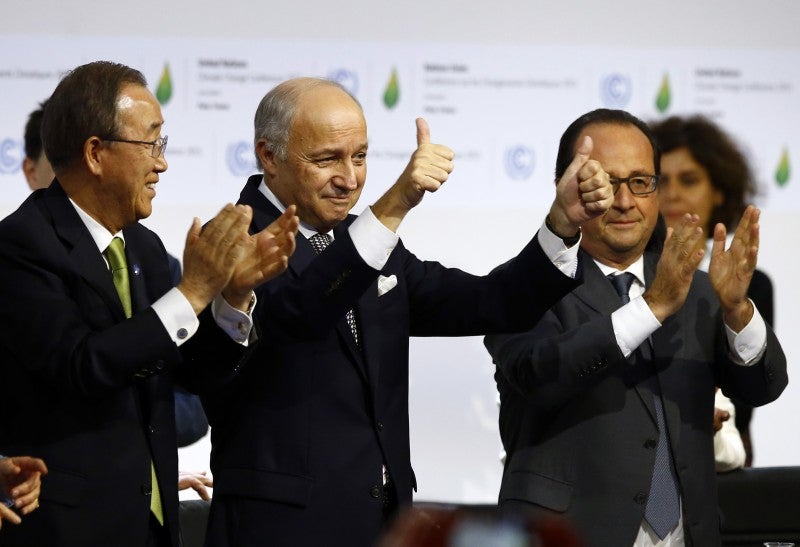 ALMOST A week after the community of nations adopted the Paris Agreement on climate change, the initial euphoria over history’s dramatic turning has subsided. Now we can trace the lineaments of the new consensus with greater clarity. As it stands, the climate deal will not save Earth from planetary catastrophe—but, as veteran environmental advocate Bill McKibben tweeted on the day the deal was reached, “It may have saved the chance to save the planet” itself.

In the half-decade it took for the parties to the UN Framework Convention on Climate Change to recover from the failure of the Copenhagen summit and forge a path forward, one factor was crucial. The parties to the Convention—195 countries in all, plus the European Union as a regional economic integration entity—agreed on the need to reduce emissions of carbon dioxide and other greenhouse gases within the next two decades, and defined their own respective reduction commitments.

To date, 186 parties have submitted their commitments, known as Intended Nationally Determined Contributions or INDCS, to the Convention secretariat. Taken together, these voluntary reductions will stem the rise in global average temperature by the middle of the century from the current trajectory of 3-4 degrees Celsius to about 2.7 degrees. This is a radical improvement, but still inadequate.

The Paris Agreement commits the parties to a rise in temperature (the direct result of the heat-trapping effect of greenhouse gases) of well below 2 degrees, and encourages them to pursue the more ambitious goal of below 1.5. The latest evidence estimates that world temperature has risen by almost 1 degree since the Industrial Revolution; the 2-degree threshold was decided on only a few years ago, and the campaign for the lower 1.5-degree target, led among others by the Philippines as chair of the Climate Vulnerable Forum, goes back only a year or two.

The INDCs as they stand, then, will not lower temperature rise to below 2 degrees, the level beyond which the most severe consequences of global warming are feared to be irreversible. This lack of alignment between the parties’ responsibilities under the Agreement and the Agreement’s own objectives has been the basis of much of the criticism leveled at the climate deal. It sounds, many critics say, much better on paper.

Other criticism has focused on the opposite, on the Agreement’s lack of true ambition. Where is the language that forces countries not to add to carbon production by leaving fossil fuel reserves in the ground? Where is the provision that penalizes parties for failing to meet their self-defined emission reduction targets? Where is the legal framework that obliges the economies that have contributed the most to the problem to help climate-vulnerable countries with solid and quantified financial assistance?

In truth, the Paris Agreement has the beginnings of the answer to each of these questions, but precisely because these and similar concerns are controversial, the pertinent passages in the compact are muted, nonconfrontational. Even the deal’s most praised element, the inclusion of the 1.5-degree goal, is phrased as an aspiration, rather than an obligation.

The full quote from McKibben recognizes that there’s a whole lot of building to be done. “It may have saved the chance to save the planet (if we all fight like hell in the years ahead).”

Those who followed the climate negotiations closely may have missed out on other news coming out of Paris. Two examples may suffice: The Lima-Peru Action Agenda brought many nonstate actors together, businesses as well as civil society organizations, to make a head start on creating the green economy. And hundreds of local governments around world also joined forces to reduce emissions. Individuals and institutions are moving.

In other words: It is the hard work and the fight-like-hell attitude we bring to the text of the Agreement that will determine whether Paris is, in fact, a true turning point in history.