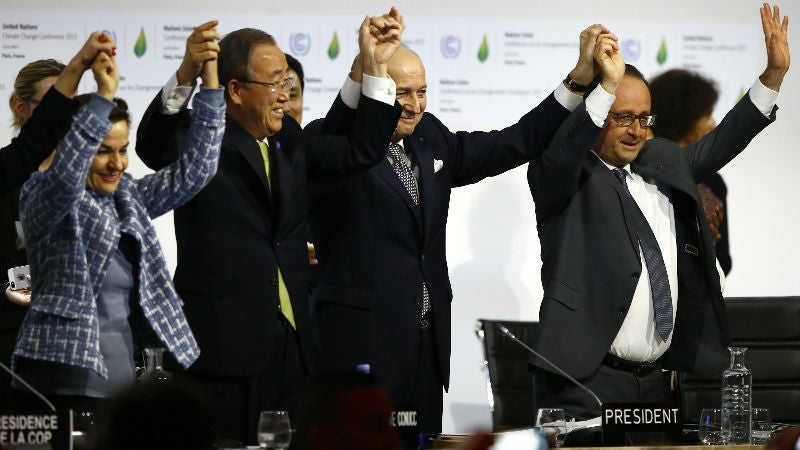 AS DELEGATES cheered the ratification of the climate change accord in Paris on Saturday, UN Secretary General Ban Ki-moon described the global consensus as a “defining moment on a long journey,” a historic passage from contentious debate to communal action meant to save this planet we all call home.

In recent years, the warning signs have been dire and unmistakable: melting glaciers have slowed the earth’s rotation, and heated seas to a point that marine life has been severely compromised. Rising sea levels have threatened to swallow up low-lying islands and coastal nations, while droughts have dried up crops and wells.

Catastrophic typhoons and floods have meanwhile become the new norm, with the Philippines among the hardest hit by erratic climate changes that come as a result of global warming, the lethal heating up of the earth’s atmosphere because of the unremitting use of fossil fuels.

So alarming is the phenomenon that decades after the idea of reducing carbon emissions had divided rich and poor countries, a serious, last-ditch effort was made in the last two weeks in Paris to bring the world into agreement on how to mitigate this threat.

While the accord may be imperfect, it provides a helpful precedent for future efforts, US President Barack Obama said, adding that “The Paris agreement establishes the enduring framework the world needs to solve the climate crisis.”

In brief, the deal commits most of the world’s countries to reducing carbon emissions through a combination of legally binding and voluntary efforts. For a start, they are asked to report on their progress, using an international standard every five years, with new and, hopefully, more ambitious, goals set in the future.

The planned accord seeks to help developing and poor nations shift to clean and sustainable sources of energy so they could cut back on the use of fossil fuels—coal, oil and gas—that leads to the release of earth-warming greenhouse gases.

The salient points of the Paris accord include the following:

• End the use of fossil fuels to reduce greenhouse gas emissions and to curb global temperature so that it does not rise above 2 degrees Celsius by 2100. The ideal target is temperature below 1.5 degrees Celsius, the pre-Industrial Age standard. The 2-degree Celsius target is needed to avoid the most devastating effects of climate change, according to climate scientists, but the world’s most vulnerable countries are pushing for the 1.5-degree Celsius ceiling to avert disastrous flooding that could wipe them off the planet.

• Rich countries are asked to set aside at least $100 billion annually starting 2020 for developing countries to develop renewable energy sources. The allocation is expected to increase with time.

• Countries must set up plans and programs to cut emissions, and are required to submit monitoring reports every five years on their progress, and to map out new plans, if warranted, to meet their climate commitments. The accord creates a system that encourages nations to step up voluntary domestic efforts to curb emissions and to come up with programs suited to each nation’s particular situation.

The agreement has been described as “walking a fine line, being binding in some elements like reporting requirements, while leaving other aspects of the deal—such as the setting of emissions targets for any individual country—as nonbinding.”

Some might say the agreement glossed over the most contentious issues, among them the developing nations’ insistence that established countries shoulder the lion’s share of responsibility, because they have emitted most of the greenhouse gases since the Industrial Revolution.

But the United States and other rich nations counter that emerging giants must do more, since as developing nations, they now account for today’s emissions and would be largely responsible for future warming.

Still, overall, the vast majority of countries walked away from the Paris climate conference satisfied that the text was “a generally fair and balanced representation” of what most nations wanted despite significant compromises on the thornier issues.

It is, at the very least, a promising start, as even the small, endangered nations were heard and their concerns seriously considered and included in the accord.

“We came together around a strong agreement the world needed. We met the moment,” Obama said of 200 nations’ representatives linking arms to push back disastrous climate change.

Thanks to the Paris accord, that moment is likely to extend into the future.

87 yo from Pasay walks everyday to Makati, gets free bike from car shop