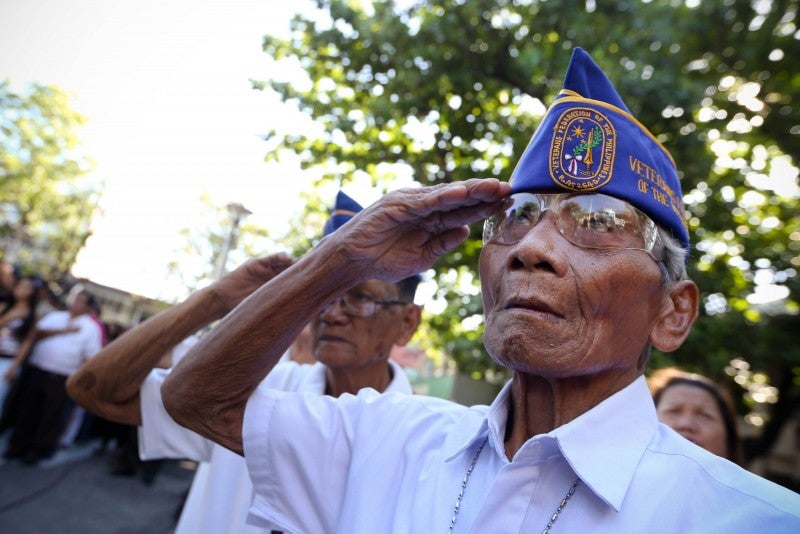 How young they were then. How rosy the future must have looked, before World War II descended and they were caught up in its terror. Filipino war veterans and “comfort women” are correct to lament the fact that there is sparse record of their wartime plight, even now when they are in “the evening of [their] life.”

World War II was a forest fire that burned through a generation of Filipinos. The bombs fell blindly and the Japanese occupiers’ brutality was so extreme that to this day, it seems that the total death toll and the damage (both physical and not) remain unknowable. Which is why it is so important that the wartime stories be told and recorded, so that future generations would not be ignorant of that “very difficult” era when, as recalled by 92-year-old former guerrilla Dee Kong Hi, “people were being killed and there was nothing to eat.”

At a time when historical revisionism is not only possible but somewhat de rigueur, the honest and accurate retelling of wartime stories is a necessary exercise. This was the sentiment that emerged during a forum conducted in Quezon City last Dec. 8, which marked the 74th anniversary of the Japanese invasion of Manila.

Thankfully, the Philippine Veterans Bank has joined forces with organizations of war vets and Spyron AV Manila to produce books and documentaries about Filipino heroism during World War II. “We hope to do more and to preserve as much of history [as we can], because when these veterans are gone, we are left with only secondhand information about the war,” said PVB vice president for corporate affairs Miguel Angelo Villa-Real.

Spyron AV Manila is touring the schools to make the students aware of the war vets’ struggle, said its managing director Lucky Guillermo. “We have an advocacy to bring our roadshow to the youth. We will do our best so that these stories are not forgotten,” he said.

Indeed, why not bring to the youth the story of how Filipino guerrillas ended the war in the Philippines? This little known wartime story was retold at a forum last September organized by the Philippine Historical Association and the Philippine Veterans Affairs Office (PVAO) in Camp John Hay in Baguio City, which the Japanese forces first attacked on Dec. 8, 1941.

According to the military historian and retired general Restituto Aguilar, chief of the PVAO Memorial and Historical Division, it was the Filipino guerrillas’ discovery of Japanese war plans in Cebu that led to Japan’s defeat in the country. The “Koga Papers” indicated the disposition of the Japanese forces in Leyte, and once US Gen. Douglas MacArthur’s men got hold of the documents, it was only a matter of time before the Philippines was freed of Japanese control. This is a story that should be told in classrooms instead of being commemorated through a single marker in Cebu, Aguilar said.

But the storytellers are becoming harder to find. Some 6,000 veterans die each year from illness or advanced age, Villa-Real noted. As of last June, only 11,675 war vets remain, per PVAO records.

Thus, Villa-Real and his group are driven by a sense of urgency. “It’s a rush for us [to work on the project] before it’s too late” he said. Last July, Fernando Javier, the Philippines’ oldest surviving war vet, died at 107.

The ranks of the women who were forced into sexual slavery by Japanese troops during World War II are also thinning, disheartened by the indifference of the Japanese government that has issued a “non-apology,” which the Philippine government has not seen fit to protest. On top of everything else, the Philippine government’s P3.002-trillion budget has no provision for the total administrative disability pensions for the spouses and heirs of over 16,000 war vets. What is this but another act of forgetting?

How unfortunate that the wartime stories are fast fading away like the old soldiers who sacrificed their youth to the motherland. When all the veterans and comfort women have passed on, who will stoke the national memory about this important and terrible chapter in Philippine, in fact global, history?

Impoverished indeed is a nation that does not remember, and does not ensure that its future generations will be more than just a blank slate.