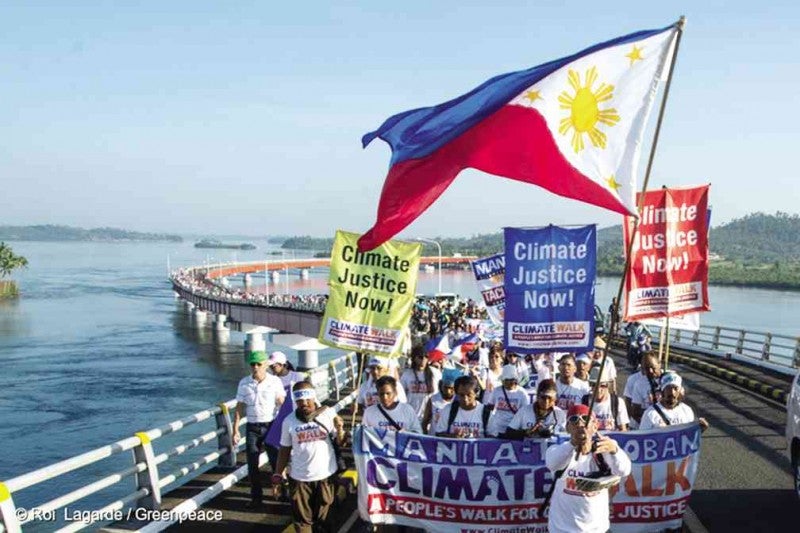 MARCH FOR CLIMATE JUSTICE Participants cross the San Juanico Bridge on their way to Tacloban City for the first anniversary of Supertyphoon “Yolanda” (international name: Haiyan). PHOTOS from GREENPEACE PHILIPPINES

AT A PRESS conference in Paris, the Commission on Human Rights announced on Dec. 4 that it would launch an investigation into the top 50 big polluters, a step which could hold fossil fuel companies responsible for the impact of climate change, such as extreme weather events. This will be the world’s first national human rights investigation into big polluters.

The groups are demanding an investigation into the top 50 investor-owned fossil fuel companies and their responsibility for climate impact that endangers people’s lives and livelihoods as well as that of future generations.

The announcement was made amid the United Nations Framework Convention on Climate Change Conference of Parties in Paris, where world leaders came together to hammer out a deal for meaningful climate action.

Just as the climate summit in Paris aims to bring us closer to a legally binding agreement, climate justice opens the doors for victims of climate change to demand redress and justice from the big polluters mainly responsible for bringing us to the brink of this climate crisis.

Our world leaders are being held accountable for climate change but they represent only one side of the coin. Let us not forget the big polluters that represent the other dark side, for their historical and cumulative responsibility for climate change.

For a long time, no one could pinpoint who exactly is responsible for climate change and how to hold those accountable. This is no longer the case.

Recent peer-reviewed research conducted by Richard Heede has estimated for the first time the extent to which 90 named entities—the largest multinational and state-owned producers of crude oil, natural gas, coal and cement since 1854—have contributed the largest cumulative global carbon and methane emissions.

These 90 entities, also known as the big polluters, are responsible for an estimated 914 billion tons of carbon dioxide equivalent (GtCO2e) of cumulative world emissions of industrial CO2 and methane between 1854 and 2010, or about
63 percent of estimated global industrial emissions of these greenhouse gases.

The largest five investor-owned companies—namely Chevron, ExxonMobil, BP, Royal Dutch Shell and Conoco
Phillips—alone contributed 12.5 percent of the global historic emissions through 2010. Yet, none of them are being held accountable for the catastrophic impact on people.

The Heede study has opened the door to establishing the direct link between the activities of the big polluters and their role in climate change, approaching the same level of significance as the link between tobacco and lung cancer.

Just recently, the New York attorney general has opened an investigation into ExxonMobil for knowing about the risks of climate change as early as 1970s and keeping it from the public and investors, the same way that big tobacco led its own misinformation campaign about the direct link of smoking to lung cancer. 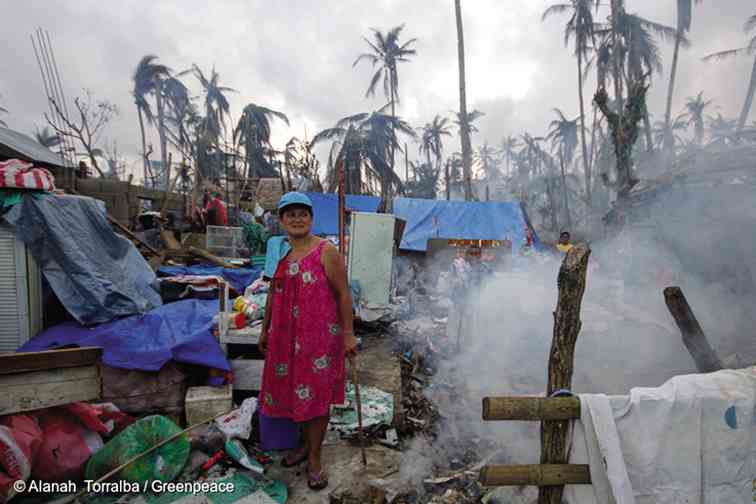 TWICE A VICTIM Sarah Plaza, 63, whose house was destroyed by Supertyphoon “Yolanda,” rummages through her belongings after Typhoon “Ruby” (international name: Hagupit) damaged her new house in Taft, Eastern Samar.

Climate change is creating social injustice especially for vulnerable countries like the Philippines, whose carbon emissions are one of the smallest in the world, and yet continue to bear the brunt of its catastrophic impact.

One might wonder, how can these countries force the behemoth corporations to clean up their act? With decades of environmental abuse under their belt, the big polluters know how to deny responsibility, evade regulation and manipulate governments. However, environmental litigation is happening and are being won in different countries.

In June, a nonprofit group called Urgenda argued before a Hague court that the Dutch government had an obligation to protect its citizens from climate change and its dangerous effects.

Given the country’s great susceptibility to the disastrous consequences of sea-level rise, much like that of the Philippines itself, Urgenda has reason to be concerned.

In Pakistan, a farmer petitioned the Green Bench of the Lahore High Court for it to order the government to protect the citizens from climate change.

The court declared that the government’s “delay and lethargy” in implementing the Framework for Implementation of Climate Change Policy “offends the fundamental rights of the citizens which need to be safeguarded.”

Most recently, a Peruvian farmer and mountain guide Saúl Luciano Lliuya sued RWE, one of the big polluters in Germany. The lawsuit argues that “the company is partly responsible for glacial melting in the Andes (for its contribution to climate change) and thus also for the danger to his house, which lies at the foot of the mountains.”

These climate initiatives and victories are not exclusive to countries abroad.

In the Philippines, there is judicial recognition of environmental worth. The most salient example is a 1990s case: Oposa v Factoran.

In this case, a group of minors sued to keep the Department of Environment and Natural Resources from allowing companies to cut down rainforest trees for commercial use. Though the Philippine Supreme Court did rule in favor of the minors, more important than the specific consequences for timber is how the Oposa ruling reframed peoples’ right to a healthful environment.

The ruling recognized that present generations can sue on behalf of future generations, lending significant weight to legal environmental claims.

Further, it “declared that the right to a balanced and healthful ecology is a directly actionable constitutional right that is superior to the Bill of Rights.”

In 2010, the Supreme Court adopted the Rules of Procedure for Environmental Cases, codifying a number of practices and perspectives conducive to environmental protection. 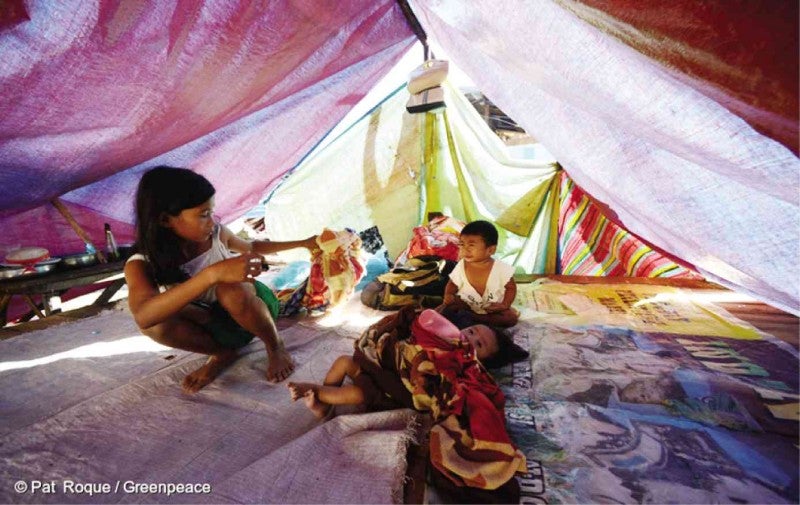 Among other measures, the rules endorse the precautionary principle and provide avenues for the writ of continuing mandamus and the writ of kalikasan. The latter, in particular, is interesting. It is a writ filed in case of threats posed by large-magnitude environmental harm.

The writ has enjoyed some success although most cases are pending for review in the highest court. For example, in 2010, it was used with a temporary environmental protection order to halt the operations of a pipeline.

Less than a year later, the Supreme Court used the writ of kalikasan to hold Placer Dome Inc. and Barric Gold Corp. accountable for a mining accident.

Last week, citing the precautionary principle, the Supreme Court ruled to permanently bar the field testing of BT talong, invalidate Department of Agriculture Order No. 08-2002 and to temporarily bar genetically modified organism importation, commercialization and propagation until a new administrative order can be promulgated.

Cognizant of the fact that climate change affects the economically poor and the marginalized, it is only fair that citizens take action and hold these big polluters accountable for the harm and damage that have resulted from their highly profitable business activities.

According to the 2009 Report of the Office of the High Commissioner for Human Rights of the UN, “there exists broad agreement that climate change generally negatively affects the realization of human rights.”

It also “stresses the importance of accountability mechanisms in the implementation of measures and policies in the area of climate change, and requires access to administrative and judicial remedies in cases of human rights violations.”

Corporations also have a responsibility to respect human rights, which arises from a “global standard of expected conduct applicable to all businesses in all situations,” said the Guiding Principles on Business and Human Rights.

Of course, this is not to suggest that the battle to stop big polluters will be easily won—far from it. The big polluters, even when faced with litigation, will undoubtedly work to preserve the status quo
—the very status quo that is poisoning our environment and destroying the world of tomorrow.

The aforementioned cases demonstrate that the big polluters are not invincible. Holding them accountable in courts is but one tool in our arsenal though and by itself will not be enough.

Ensuring that our children will be able to enjoy their constitutional right to a healthful ecology is not just the burden of environmental lawyers and climate negotiators. It will take coordinated and concerted action by citizens to create a change.

We have an obligation, not just for ourselves, but for all future generations, to protect the environment we all share.