Trudeau in the crosshairs 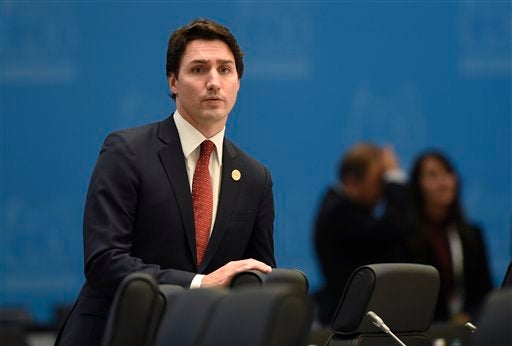 EYES will be on Canada’s new prime minister, Justin Trudeau, in this week’s Asia-Pacific Economic Cooperation (Apec) Leaders’ Meeting, and not just because the 43-year-old official is a head-turner.

The young official has so far demonstrated his willingness to snatch Canada from the fossilized thinking of his conservative predecessor, Stephen Harper, and nudge it toward a more grounded, albeit shifting, political landscape.

Casting aside the stiff conventions of his post and perhaps in a nod to his former jobs as a bartender, whitewater guide, snowboard instructor, bouncer, and public speaker, Trudeau rode a bus to his swearing-in, walked through the streets carrying his kids, and cheerfully mixed with the crowds. He is also making good on his campaign promise to accept 25,000 Syrian refugees as soon as possible as a show of solidarity with the European Union and the millions of migrants displaced by religious war and conflict.

But the most welcome sign of Trudeau’s progressive and inclusive politics lies in his choice of a refreshingly diverse Cabinet, half of it women, that includes indigenous Canadians, Sikhs, a military hero, a former refugee, the first Canadian in space, and two ministers with disabilities. It is, he said, a Cabinet that “looks like Canada (in 2015).”

While the global adulation is understandable, it must be tempered in the local setting, at least until Justin Trudeau—the son of former Canadian prime minister Pierre Trudeau—passes a crucial test of political will.

Given his popular support among fellow Canadians and his stout demonstration of willingness to initiate change in stolid institutions, Philippine civil society groups and environment activists have challenged Trudeau this early to handle the festering problem of more than 50 container vans of waste from the Vancouver area (mislabeled as recyclable plastic scraps), that were illegally shipped here in 2013.

Despite the two countries being signatories to the Basel Convention on the Control of Transboundary Movements of Hazardous Wastes, Harper’s Canada staunchly refused to take back the tons of household garbage it had dumped on our shores, shrugging the matter off as a commercial enterprise involving private parties. Canada also maintained throughout that it has no mechanism to repatriate its overseas trash.

The timorous Aquino administration, meanwhile, citing the possible strain on relations between the Philippines and Canada, dropped the matter quietly ahead of the President’s state visit to Canada in May 2015. Unstated however was the government’s fear of losing the coveted Country of Focus status, entitling it to 90 percent of Canada’s development assistance, as well as the steady sales income from this trading partner.

In July, the Philippine Bureau of Customs abandoned attempts to have the garbage sent back to Canada and ordered the garbage dumped into a landfill in Tarlac, President Aquino’s home province, until it was discovered and ordered stopped by the provincial government.

While the imbroglio has led Customs officials to rethink the bureau’s protocol on granting import clearance after the fact to cargo entering the country, the two-year-old garbage lies rotting in our ports, a stinky reminder of how a rich nation known for its pristine environment and political correctness can ignore local and international laws when it proves convenient to do so.

But with Trudeau’s ascendancy, environmental, health and labor groups have expressed hopes that the “winds of change” would carry away with it the stench of the two-year-old trash problem.

“With PM Trudeau at the helm, we expect the Canadian government to turn around the previous stonewalling by the (Stephen) Harper government, to make things right and just,” said Shalimar Vitan, chief operations officer of the environment group Ban Toxics.

After all, Trudeau’s platform includes a commitment to pursue more ambitious emission-reduction targets for Canada at the upcoming UN Climate Change Conference in Paris. With a better environment already in mind, surely Trudeau can easily make the connection between Canada’s smelly indifference to its illegal trash-dumping and the putrid air surrounding Manila’s ports.

Here is one issue where the charismatic young prime minister can prove real and sincere the Canada that he and his Cabinet project.