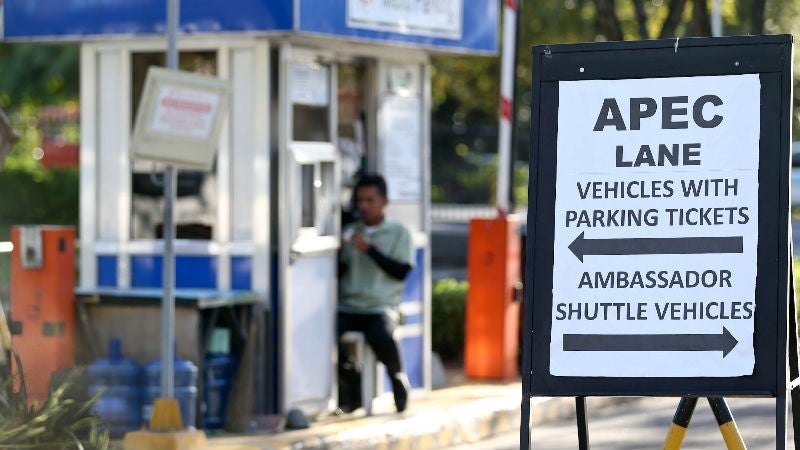 APEC PREPARATIONS A lane and parking area are dedicated to vehicles that will transport delegates who will take part in the Asia-Pacific Economic Cooperation (Apec) meetings in Manila. An Apec lane and parking zone can be found just outside the Philippine International Convention Center
secretariat building in Pasay City. LYN RILLON

METRO Manila will soon be disrupted, but at the same time honored, by the presence of the highest officials of the 21 economies that now make up the Asia-Pacific Economic Cooperation (Apec).

For the 23rd time since the grouping was born in 1989 with 12 original members including the Philippines, and since their top leaders began meeting annually in 1993, presidents and prime ministers will come together again to pose for a photo dressed in the distinctive garb of the host economy—in our case, barong.

They’ve had their barong photo before, in 1996, when President Fidel V. Ramos hosted the last Apec Leaders’ Meeting held in the Philippines for its then 18 member-economies. There’s much more to Apec than presidents and prime ministers posing for a photograph in funny shirts, of course.

Is Apec just another NATO (no action, talk only) forum, then? (NATO stands for North Atlantic Treaty Organization. –Ed.)

If the media sensation couple of Alden Richards and Maine Mendoza aka Yaya Dub have become the new symbol of the everyday Filipino, we might well ask, what’s in Apec for ‘AlDub’? What could be the payoff for the ordinary Filipino of the potentially severe inconvenience soon to be wrought on Metro Manilans by our Apec visitors?

Potentially plenty, actually—especially given the way the Philippine government has oriented its hosting and chairing this year primarily toward putting small producers, including tiny microenterprises, at center stage of Apec economic initiatives.

The group defines its primary goal to be “to support sustainable economic growth and prosperity in the Asia-Pacific region.”

Do they, really? Skeptics and hecklers argue otherwise, on two fronts.

On one front, observers and even officials who participate in the annual ritual of Apec meetings assert that nothing that comes out of the meetings actually becomes binding. No member-economy that opts to defy or leave commitments unimplemented faces any real sanctions.

Commitments rely primarily on peer pressure, “kahiyaan” or mutual courtesy for them to be observed and adhered to. It remains, after all, an informal grouping with no official charter in the form of a binding agreement or treaty.

Hence, a good number of Apec’s specific declared initiatives through the years have moved little beyond mere declarations.

And then there are those who, perhaps oblivious of the above, insist that Apec has brought harm, rather than benefits, to the people of the region.

Those views come especially from the traditional critics of globalization, who point to the widening disparities within and across countries that seem to have accompanied (even if not necessarily caused directly by) freer trade and investment flows.

While Apec has been a venue for espousing bold ideas and proposals toward wider and deeper economic integration, it is in other forums, such as the World Trade Organization and regional trade agreements, that such proposals are actually pursued and enforced.

Through Apec’s most critical forums—the Meeting of Ministers Responsible for Trade (MRT), along with the Senior Officials Meetings and those of the Apec Committee on Trade and Investment feeding into it—the Philippine government has been steering Apec’s work toward putting small enterprises “front and center” of the group’s efforts.

We started this advocacy in our last hosting in 1996, when the Manila Action Plan for Apec underscored the need to encourage the growth and development of SMEs (small- and medium-sized enterprises) through economic and technical cooperation among the Apec economies.

After all, the economic benefits of Apec are not just reserved for big business, especially when small firms make up more than 97 percent of all enterprises, contributing an average of 67 percent of all jobs across the region. In the Philippines alone, these percentages are 99 percent and 61 percent, respectively.

The theme for this year’s Philippines’ Apec hosting is “Building Inclusive Economies, Building a Better World,” a vision that the 21 economies will pursue through fostering much stronger participation of micro, small and medium enterprises (MSMEs) in regional and global markets.

He has since made sure that other Apec meetings, whether on financial cooperation, services sector development, women’s concerns, environment or other issues align with and support the BAA for MSMEs.

Well aware that policy commitments made in Apec are nonbinding, government is moving a step further to translate the BAA for MSMEs into an Implementation Plan to impel member economies to take concrete action.

It includes moves to facilitate MSMEs’ access to finance, e-commerce platforms to

expand MSMEs’ direct access to export markets and institutional support to promote networking, clustering and pooling of resources among MSMEs, among many others.

And we, as purveyors of the BAA and its Implementation Plan, are obliged to show the way and lead Apec by example.

Happier life for all

In the end, if Apec is successful even only in this, we all stand to benefit from a much more vibrant and resilient small enterprise sector working hand in hand with large enterprises to generate more millions of more quality jobs.

If and when this happens, we should be able to keep millions of mothers and fathers here at home with their families, earning incomes and livelihoods enough to support a happier life for all Filipinos, AlDub included.

Sharon Cuneta remembers Gabby Concepcion’s mom: ‘Thank you for being good to me’