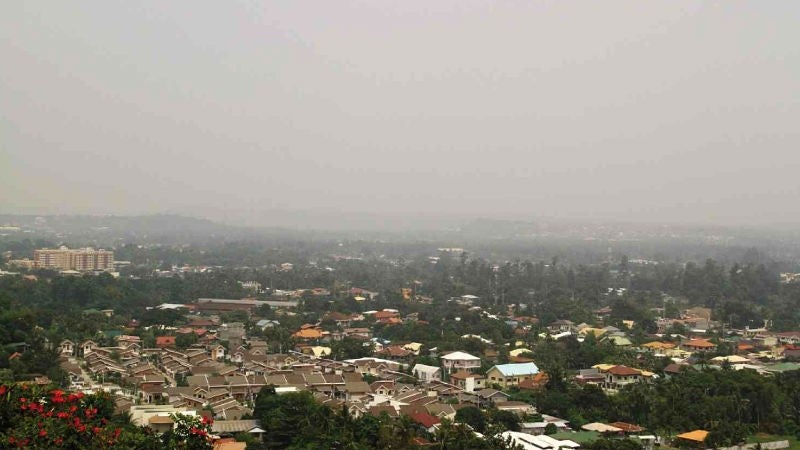 WORSENING PROBLEM Mindanao is more than 1,200 kilometers from the nearest Indonesian forest fires, but the haze has become a worsening problem across the island, disrupting air traffic and endangering public health. The picture above shows dense haze hanging over Davao City on Friday morning, obscuring visibility for airline pilots. DENNIS SANTOS/INQUIRER MINDANAO

IS THE haze from Indonesia’s forest fires hazardous to health?

“I would say, extremely hazardous for your health,” Martin Wooster, professor of Earth Observation Science at King’s College London and National Centre for Earth Observation, was quoted as saying in an online article by the Center for International Forestry Research (Cifor). Wooster was among a number of scientists who have visited Central Kalimantan, on the island of Borneo, Indonesia, to measure the effects of the fires that have been ravaging vast tracts of forest and peatland in this province and the neighboring island of Sumatra.

Al Jazeera has reported that the haze “has had a devastating impact on people’s health in Indonesia, and more than 140,000 people have reported respiratory infections in smog-choked areas.”

The Cifor article enumerates the hazardous elements present in the acrid smoke produced by these forest fires: “ozone, carbon monoxide, cyanide, ammonia and formaldehyde,” which can cause “headaches, dizziness, fatigue bronchitis, asthma, pneumonia and cardiovascular disease.” While air pollution from such fires have been a recurring problem for Indonesia, the magnitude of the devastation this year is said to be the worst on record, with the resulting air pollution affecting not only Indonesia and its nearest neighbors Malaysia and Singapore, but also Vietnam, Brunei, Thailand and Cambodia.

In the last couple of weeks, the haze has reached the Philippines, too. Ten airports in Mindanao have seen flights cancelled as dense smoke reduced visibility and movement in cities such as Davao, Zamboanga, Iligan, General Santos and Sarangani. The smoke is creeping upwards; Cebu and Negros in central Visayas, like Mindanao more than 1,200 miles from the nearest fires, have also seen disrupted air traffic. The blanket of smoke has been so vast that it’s reported to be spreading even to Papua New Guinea. Indonesia appears helpless to fight the fires on its own; it has asked the help of Australia, Russia, Singapore and Malaysia for equipment and know-how, and it has also announced that it is preparing at least six warships and two state-owned ferries to evacuate children and residents from its worst-hit provinces.

How has it come to this?

Forest fires have been a perennial problem in Indonesia, the result of slash-and-burn practices by farmers and rural folk. It’s an age-old method for clearing the land, which is still practiced in many other countries and cultures, including the Philippines. But Indonesia—the world’s largest archipelago with some of the biggest swaths of forests on earth, but largely without the strict laws to regulate such practices, or the advanced fire-fighting technology of other countries—is especially prone to forest fires that could rage on for extended periods, and with devastating consequences. The current conflagration has been going on since June, exacerbated by the dryness brought on by the El Niño phenomenon. Having spread not only to Singapore and Malaysia, the usual yearly victims of the haze—four million students in Malaysia alone have borne the brunt of school closures due to the hazardous air—but also to other countries in the region, Indonesia’s blight has become a bona fide Southeast Asian problem. What, then, is the Association of Southeast Asian Nations doing about it?

In 2014, or 17 years after the 1997 haze crisis that was said to have cost an unprecedented $9 billion in damages, Indonesia finally signed off on a document called the Asean Agreement on Transboundary Haze Pollution that called on it to take more active steps to curb forest fires, through local efforts or with international help—or face legal liability for their consequences. Asean is famously skittish at being seen as interfering in the internal affairs of its 10-member countries, but the current air pollution crisis emanating from Indonesia poses an acid test both for the validity of the haze agreement supposedly binding among all Asean countries, and the ability of the organization itself to enforce what it has collectively agreed on.

The immediate effects of this socio-environmental nightmare have been evident, but the long-term consequences may manifest only years from now, with the health and wellbeing of hundreds of millions of people in the Southeast Asian region at stake. On the eve of its integration, Asean needs to drop the niceties and deal more definitively with this problem.