The best lion-tamer we have 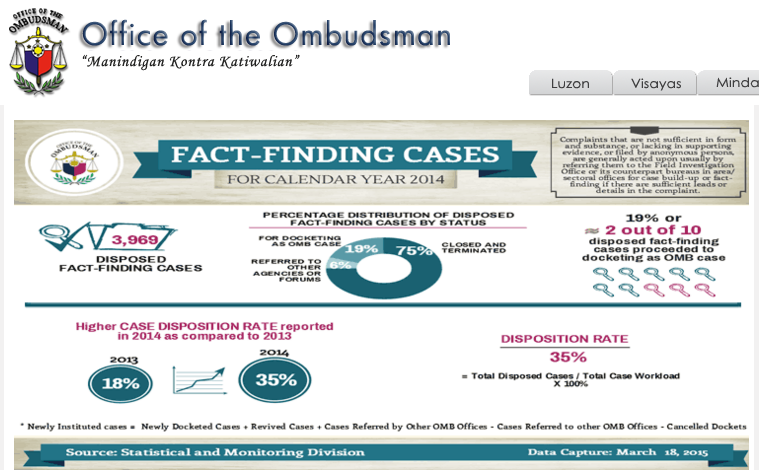 Ombudsman Conchita Carpio Morales seems to be on a rampage these days, doing an excellent job of leading the country in its fight against corruption, and giving it a well-deserved shot in the arm in the process. The decisions she has made lately would make your head spin.

Consider: She ordered dismissed 19 top officials of the Philippine National Police, including, if I read correctly, two with the equivalent military rank of brigadier general and the rest mostly colonels. Then she also ordered dismissed (and perpetually barred from holding public office) the Capiz governor and his son. She meted out a one-year suspension on the governor of Camarines Norte. The Bacolod City administrator, she suspended for one year (he beat her to the punch, though, because he resigned to run for Congress). And the former head of the Technology Resource Center (and four others) she also barred from public office. All for cause, which the Reader can very well read up on elsewhere.

This, of course, on top of what she meted out to Makati Mayor Junjun Binay and of course his father, Vice President Jojo Binay, who has been crying political persecution all this time, claiming that what Ombudsman Morales has been doing is aimed only at helping prevent a successful bid for the presidency on his part.

Well, the dismissed Capiz governor is an ally and good friend of another presidential contender (Mar Roxas), so does this mean that the Ombudsman is making it easier for Grace Poe to win? Ridiculous.

But then, the Binays tend to have a humongous persecution complex, as evinced by the spin they put on the serving of the notice of dismissal on Mayor Binay—claiming that the servers (three women) had made something like a public scandal out of the incident for maximum humiliation. It turns out that the women were not even near the Binay house, as they were told (by Binay underlings) to serve the order somewhere else in the vicinity. And Mayor Binay’s children were in school. What scandal and humiliation could have been perpetrated? The only scandal in the neighborhood would be involving the size and luxury of the Binay house compared to his salary as a Makati Council member (before he ran for mayor). And of course, the size and luxury of the Vice President’s house.

But I digress. Morales is the fifth ombudsman we have had since the restoration of democracy, succeeding Merceditas Gutierrez, who succeeded Simeon Marcelo, who succeeded Aniano Desierto, who succeeded Conrado Vasquez. And she has outshone them all (although, admittedly, it is not hard to do, except for Marcelo).

What is the secret of her success? Could it be that she was appointed on the basis of what she knew, instead of who she knew? Gutierrez was the classmate of then First Gentleman Mike Arroyo; Marcelo (though he turned out well) belonged to the law firm that serviced the Arroyo needs; Desierto was an insider in the Office of the Ombudsman but was a judge advocate in the AFP Judge Advocate General’s office when Fidel Ramos was around.

Morales, on the other hand, was not a personal friend of President Aquino. In fact she was surprised when he wrote to her, asking her to be the one to swear him in as president. So obviously, he chose her to be ombudsman on the basis of her qualifications alone. And she has guarded her independence ferociously, thank heavens. At the very least, there is no chance for “Hello Garci” type telephone calls and secret deals.

Actually, P-Noy has been very lucky with his women appointees (Morales, Sereno, Pulido-Tan, Mendoza, Henares, De Lima, Soliman; his only “palpak” choice was an assistant secretary). They were all excellent choices. And they have done him proud.

But that was another digression.

I checked the Office of the Ombudsman website, which I urge the Reader to likewise do. It is one of the most transparent and reader-friendly websites, which is part of the 7-year roadmap, so don’t be afraid. There, you will find, for instance, that 49 percent of cases filed in the Sandiganbayan are against high-ranking officials (one of the objectives mentioned in the roadmap), with the rest divided among low-ranking officials (28 percent) and private parties (23 percent). As it should be. And 41 percent of the cases filed in or taken cognizance of the Office of the Ombudsman result in penalties of suspension for more than a month, while 28 percent of those cases result in dismissal from service. The Ombudsman is no pushover.

So take heart, those who think that the war against corruption is unwinnable. Great (by the standard of past experience) progress has been made. What the Ombudsman is doing reminds me of what happened in Italy 20 years ago, when the Clean Hands (Mani Pulite) phenomenon took place. A group of magistrates, the most prominent of whom was Antonio di Pietro, carried out a rash of investigations involving political corruption—“4,472 Italian businessmen, politicians, and others were investigated and 1,188 people, mainly politicians and business administrators, suddenly faced an array of corruption charges.” A lot of suicides resulted, both of politicians and businessmen. At one time, more than half of the Italian parliament were under indictment, and 400 city and town councils were dissolved. It caused the fall of the government.

South Korea underwent a drive similar to Clean Hands 10 years later, and had similar success (or lack of it). But the point is that corruption can be tamed, although one doubts it can be killed. And in the Philippines, Morales is the best lion-tamer we have. She recognizes no political allegiance or loyalties, and is one tough lady. I salute her.

Read Next
Finding the truth about cancer
EDITORS' PICK
LIST: What to expect in areas under GCQ, MGCQ
DOTr bares 2 phases of public transport revival in GCQ areas
SM prepares for ‘safe malling’
Checkpoints maintained during GCQ to ensure health protocol compliance
Cherry Mobile teams up with Cloud Panda PH, launches online store
Notice of 2020 regular meeting of stockholders June 18, 2020
MOST READ
LIST: What to expect in areas under GCQ, MGCQ
Duterte: No reason for Richard Gomez not to accept healthy returning Ormoc residents
CNN crew arrested while reporting on Minneapolis protests
DOH explains: Only 109 of record-high 539 COVID-19 patients were ‘fresh cases’
Don't miss out on the latest news and information.

Duterte: No reason for Richard Gomez not to accept healthy returning Ormoc residents

Over 50,000 part-time college faculty members in need of financial aid

COVID-19 data release to be delayed due to changes — DOH