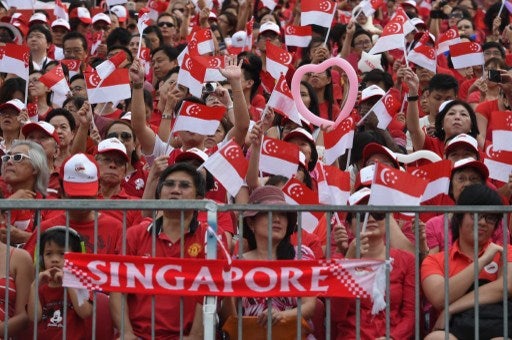 People wave national flags during Singapore’s 50th National day anniversary celebration at the Padang in Singapore on August 9, 2015. We should ask ourselves: Do Filipinos have the same enthusiasm and sense of nationhood? How do we define being Filipino? As we journey toward full independence and as we approach the next momentous event, the May 2016 elections, it’s time we asked ourselves once more: What does my being Filipino mean? AFP PHOTO/ROSLAN RAHMAN

I had the chance to witness Singapore’s golden jubilee celebration in August. Big activities were lined up for the anniversary week, especially the weekend, culminating on Aug. 9, which is Singapore’s National Day. As anyone would expect, the entire event was spectacular.

The streets were overflowing with people. There was free admission for tourists in many places, including the national museum. Public transport was also free during National Day. The culminating event on the evening of Aug. 9 was marked by a colorful display of fireworks.

One of the things that struck me was the sea of people wearing the red and white colors. Almost everyone I met wore these colors which are found on the Singaporean flag. Then there was this old lady who, out of nowhere, greeted me and helped me with directions, without me having to ask. She must have sensed that my companion and I were figuring something out, as we stood in front of the city map in a train station. She was quite generous in explaining to us at length the easier way to our destination, as well as the bus codes. (Singapore has codes for its buses to identify destinations.) After the cheerful conversation, the old lady told us: “Happy National Day!” She was all smiles when she said this.

“What a kind-hearted lady,” I thought to myself. But, I sensed something deeper—a certain joy that extended from her to me after the kind gesture. I pondered about it. I felt the euphoria in the air. I asked myself where all the excitement was coming from. Other questions popped up in my head.

FEATURED STORIES
OPINION
Go for the ‘big circle’!
OPINION
Education and the state of the Filipino family
OPINION
Retired yet still extremely needy

While I mused over the red and white colors I was seeing everywhere, I came to a profound thought. Yes, it was true that the euphoria was fueled by the fact that a nation was celebrating a milestone. But the underlying factor that made the mood more celebratory was the people. The Singaporeans converged to celebrate their nation’s golden jubilee and embraced it as their event and their milestone. This was the silent message conveyed to me by the multitude of men, women and children—whole families—united by the colors of their clothes and, in many cases, by the Singaporean flag painted on their faces. I witnessed how Singaporeans were proud of their nation, and loved it.

These questions are often dismissed as “out of reality,” even as absurd. How can one country marked by racial and language differences rally around a common flag? But if it is true that differences among individuals make it impossible to build a nation or to make people believe in a shared nation, then Singapore must have been a deviant. But, I refuse to believe that individual differences can make nationhood impossible.

Social science defines “nation” as different from “country.” The latter is bound by physical demarcation while the former implies characteristics that are beyond geography. Nationhood entails shared history, culture and tradition. If so, is it possible for a multiethnic country to have a sense of nationhood—a sense of having something that is “shared”? The key lies in finding a “shared” treasure.

In the case of the people of Singapore, they find that “shared” treasure in a common story. Many who witnessed Singapore’s separation from Malaysia in 1965 experienced the hardship that accompanied it. Lee Kuan Yew shared these stories in his memoir “From Third World to First.” Among the memorable images of that separation was a weeping Lee Kuan Yew, the leader of a new sovereign country whose path remains blurry. Singapore was without an armed force, and even its own source of water; its beginnings were tense and full of uncertainty. It was also not without its share of racial strife, being composed of three major ethnic groups—the Chinese, the Malays and the Indians. Racial violence was part of Singapore’s beginnings. But with hard work and an unceasing pursuit of innovation, Singapore managed the feat of transitioning from Third World to First World in less than 50 years.

As Singapore celebrated its 50th anniversary, many reflected on its story. Many Filipinos were moved to look back at our own experience, and lamented the lost opportunities for the Philippines to become a vibrant economy in the region. It is true that Singapore’s story is difficult, if not impossible, to replicate. Still, despite the singular context and circumstances surrounding it, its leaders’ virtues can serve as a source of inspiration for our own leaders.

There is also something to note and learn from in the Singaporeans’ sense of nationhood—that in spite of racial differences, there is harmony. We should ask ourselves: Do Filipinos have the same enthusiasm and sense of nationhood? How do we define being Filipino? Is it merely a political question of where one lives and what citizenship one holds?

It’s time we reflected on these questions. It’s time we revisited the Filipino story. As we journey toward full independence and as we approach the next momentous event, the May 2016 elections, it’s time we asked ourselves once more: What does my being Filipino mean?

I hope everyone will journey together and find the answer through the Filipino story—our story.

Miguel Antonio Estrada, 25, studies at the University of the Philippines Diliman.

Stories from the young Filipino

Read Next
The schoolboy who was mistaken for a terrorist
EDITORS' PICK
KWF has no power to ban, censor written works – Lagman
Why Tagle is a leading papal contender
House energy committee chair Arroyo bats for cheap electricity
Powered by style, innovation and passion
A laptop that maximizes your WiFi so you can maximize your productivity
In Borongan, nuns play hoops (not mahjong)
MOST READ
Why Tagle is a leading papal contender
SRA officials should resign after ‘illegal sugar order’ – Zubiri
Arjo Atayde reveals proposal to Maine Mendoza was ‘more than a year’ in the making
Gilas gets solid core with Clarkson, Sotto planing in
Don't miss out on the latest news and information.