Duterte in the flesh 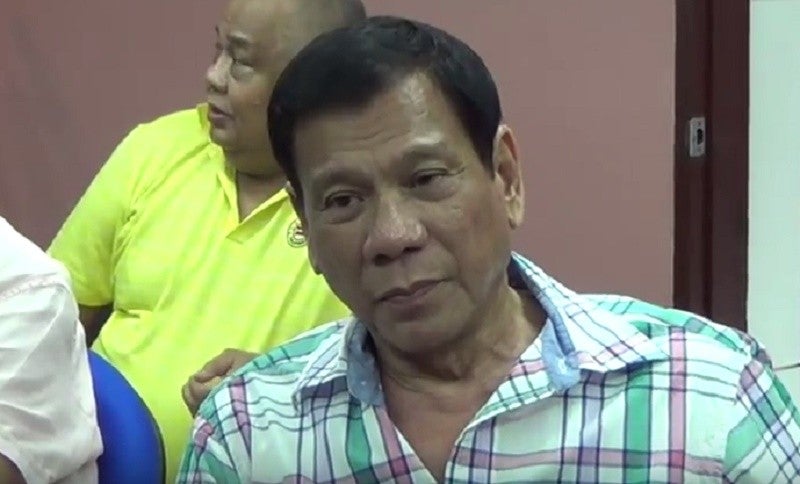 At a recent dinner hosted by the Inquirer, I was lucky to be a fly on the wall in a roundtable for Davao Mayor Rodrigo Duterte with Inquirer editors. It was a moment of revelation: to see one of the most controversial politicians in the country today in the flesh, to hear his views, his principles, unfiltered.

Not that the man seems to care about what other people think. Story upon story published about him always comes with a spicy retort to people who had aimed tirades at him, and he uses cuss words like “f-ck,” “p-tangina,” or “yawa” very casually, so that one may get an impression that he’s unethical, or nasty. One may also get an impression that he’s just another leader with an iron hand, who sees force and violence as the only means to fix the country, or what’s ailing it.

But my encounter with Duterte proved that he’s much more, and that he’s a man of the law (although to say this is ironic, knowing he has earned the reputation of putting the law in his hands). Being a lawyer himself, he cited provisions, talked about due process, and explained the five pillars of the law twice. He monopolized the conversation, as what was expected. He was spontaneous in answering every question, and answered each with depth and length. He took a break only when Inquirer.net editor in chief John Nery noted that he had not touched his food since he arrived. He barely ate the meal prepared for him; instead, he exhausted everyone with all the ideas he threw: I am promoting federalism. Drugs are the root of all problems. Constitutional convention, anyone?

I couldn’t help but ask myself, since he dominated the news with his quick wit and strong personality: How can a man from the minority, a man from Mindanao, attract so many supporters?

Maybe it’s because with Duterte, there is no elephant in the room. If there is, he is quick to address it. There seems to be nothing he’s afraid of sharing with the media, be it his disdain for the Catholic Church, his beef with Justice Secretary Leila de Lima, or his desire to overhaul the government. Negative reactions on his leadership do not appear to affect him at all, because he believes, and is confident, that he delivers.

His candid personality has surely drawn voters to him. Why some people are crusading for him despite his constant hesitation to seek the presidency. Why six tycoons came to talk to him and offer financial help. Every brash opinion stated works like a magnet, and it’s because he says things that one can only dream of saying in public. What he says, he does, like a revolutionist in action. People are hoping he would be their voice, a voice so strong and domineering it would tower over voices of inefficiency and corruption.

Maybe Filipinos are tired of the same old ways, and as crazy as it may sound, may be looking for another Marcos to take over the highest seat in the land.

If that’s the case, he fits. Duterte seems to be the kind of man who would not bend for the rules, but would break them, and make new ones he deems fit. His judgment is the law. I imagine his mantra like this: If you’re raping my people, stealing from my people, you do not deserve to live.

People think it’s time for Duterte to become president because years of democracy have only provided loopholes for politicians to get away with graft and corruption. People think he knows what this country needs, and is sincere in what he wants to achieve. Undoubtedly, Davao has become his biggest trophy, being globally recognized as the ninth safest city in the world. In a country where “presidentiables” are asked only to be literate, that’s something to put on a resumé. But Duterte running for president is not going to happen because we are not ready for someone like him, in the same way he’s not ready for us.

He asked: How can one make a change in a country in six years? The mayor of Davao works 30 hours a day for his city, and has been doing it for 22 years. If elected president, he may need to work 50 hours a day, only to be berated by the same people who voted for him if one of his subordinates messes up along the way.

To purge the whole system is maybe going to take decades, at the very least, and the Philippines is far from being a one-person job. He may be selfless to choose the life of a public servant, but not too selfless to choose to be the president (unless maybe, we go for federalism).

As to why we are not ready for Duterte, it’s because Filipinos are quick to ask for a leader with teeth, but are quick to revolt when the leader bites them. You do not bite the hand that feeds you, it’s said, but each of us has our own measurement as to whether we are being fed enough. It’s a take-it-or-leave-it deal with Duterte, and it’s not that surprising. We still don’t know how to take the bad with the good, as bad as that sounds.

It’s 2015, when humanitarian advocacies are booming, and we’re asking for another martial law? Words are just words, but dead bodies are more than just dead bodies.

For the nth time, when reporters and editors asked him: Why the entourage? Why go around the country? The question of when he will announce his candidacy seems to be endless. But with every inquiry, he put both of his hands on his face, as if implying his exhaustion of giving the same answer over and over again: No. I will not run.