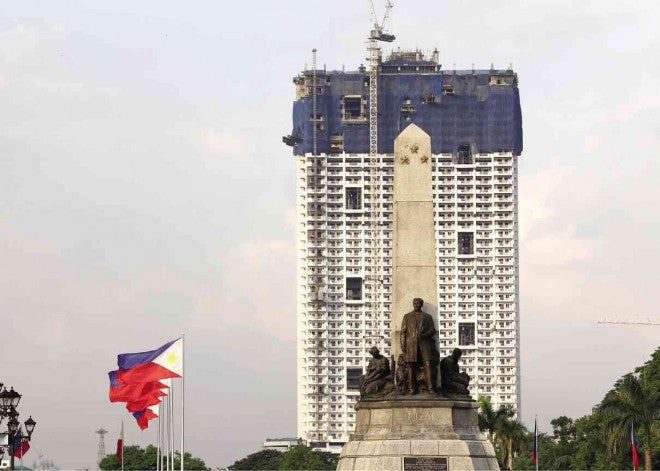 Seeing beyond the unrelenting social media commentary on the Torre de Manila (TDM) controversy requires historical context on the Rizal Monument, which was designed by Swiss sculptor Richard Kissling and inaugurated at the Luneta in 1913.

It is not well known that the national hero had left detailed instructions regarding his burial: He preferred to be buried in what is now the Manila North Cemetery, and wanted a simple grave topped with a cross and a tombstone inscribed with nothing more than his name and the dates of his birth and death. “No anniversaries,” he added. That these instructions were disregarded underscores the fact that the TDM controversy is less about Rizal and more about us, and the way we express our respect and admiration for him.

Controversy related to Rizal’s Monument is not new either. To celebrate his birth centennial in 1961, the government had planned a National Cultural Center composed of a National Theater, a National Museum, and a National Library to rise behind the monument to create a modern skyline for the distinguished and ever loyal city of Manila. Architect (and later, National Artist) Juan F. Nakpil updated the classical Rizal Monument with a stainless steel pylon to increase its height to match the style and proportion of the proposed Cultural Center.

But adverse public opinion led then Education Secretary Alejandro Roces to have the offensive shaft removed during Holy Week of 1962 to avoid a temporary restraining order. The pylon was relocated to Roxas Boulevard where it marked the boundary between Pasay and Manila, till it was taken down and disappeared in the 1990s.

Not a World Heritage Site

The Inquirer recently published two articles by Edgar Allan M. Sembrano, which were drawn from the position paper of the International Council on Monuments and Sites (ICOMOS) Philippines that demand the demolition of TDM as a “serious visual disruption to the solemnity of the Rizal Monument.” One of the articles cited the demolition of several high-rise condominium buildings that ruined the view of a heritage zone that includes the Hagia Sofia, Topkapi Palace and the Blue Mosque in Istanbul. But the example does not apply to the view of the Rizal Monument, which is not a World Heritage Site.

Sembrano’s second article carried the misleading headline: “Unesco advisory body urges ‘removal’ of Torre de Manila,” an extreme recommendation that might have been implied but not stated in the ICOMOS Resolution of November 2014. The shrill position of the some heritage advocates contrasts with the sober transmittal letter from ICOMOS president Gustavo Araoz dated January 2015 that reads as follows:

“ICOMOS calls upon all the national authorities in charge of the management, protection and conservation of the Philippines’ heritage to reinforce their commitment and to ensure, with vigor, that precedence is given to the protection and conservation of cultural heritage and to implement policies and best practices for the benefit of Rizal Monument and other such sites, and in particular to work in cooperation with ICOMOS Philippines to develop and implement conservation measures for the protection of the Rizal Monument and its setting.”

From the above, it is clear that existing heritage laws have to be revisited and amended to adjust to the changing times. Current guidelines from the National Historical Commission of the Philippines (NHCP) cover the physical integrity of the Rizal Monument and its traditional and juridical setting, and provides “for unobstructed viewing appreciation and photographic opportunities.”

Sight line should be defined

But the TDM does not obstruct the view because it is built 780 meters behind the monument and 400 m outside Rizal Park, a National Historical Landmark considered the traditional and juridical setting of the monument. If setting, sight line and visual corridors are to be protected, corresponding legislation should be enacted that cannot be applied retroactively. Sight line should also be defined and its limits clearly spelled out in amendments to current building, zoning, land use and heritage laws.

Often overlooked in the NHCP guidelines is the need for local government units to enact regulations for areas behind or around a monument, specifying what can and cannot be built, as well as height and design restrictions. Fortunately, hearings on the TDM controversy conducted in aid of legislation by both houses of Congress have resulted in amendments to the heritage law proposed by Sen. Pia Cayetano, as present laws and guidelines do not include sight line.

Heritage advocates often cite the Venice Charter of 1964 against TDM, but conveniently leave out the fact that the Philippines is not a signatory to this document laying out the basic principles for heritage preservation. In 2012, the Unesco World Heritage Committee and experts proposed updating guidelines for sites and monuments declared as Unesco World Heritage Sites to include visual setting. Unesco has yet to adopt a rule on sight lines. In fact, NHCP legal counsel Jose Manuel I. Diokno has cited over 40 international documents on World Heritage that illustrate how important views or sights are not yet specifically protected.

As a declared National Monument and National Cultural Treasure situated in a National Historical Landmark, the Rizal Monument is under the jurisdiction of the NHCP and the National Museum, which are mandated by law to issue a cease and desist order (CDO).

The National Commission for Culture and the Arts (NCCA), on the other hand, is mandated to protect World Heritage sites at risk in the Philippines. It therefore overstepped its authority when it issued a CDO on TDM to protect the Rizal Monument, since the monument is not a World Heritage Site.

It is unfortunate that social media as well as an editorial in this paper had branded NHCP Chair Maria Serena Diokno “unhistorical” for acting within the mandate and guidelines of her agency. Her adherence to the rule of law was derided by the solicitor general as “narrow and legalistic,” but going beyond the letter of the law can be a recipe for confusion.

Hopefully, the demolition or completion of TDM would give rise to legal guidelines that would end the debate between heritage preservation and progress. What does the future hold for monuments and landmarks similarly situated? Do we demolish all the buildings that have mushroomed around the Bonifacio monument in Caloocan?

What about the skyscrapers rising in Fort Bonifacio and changing the serene landscape of the American Cemetery and Libingan ng mga Bayani? Shall we remain imprisoned in the past or can we move into a future where old and new coexist, where the present can create its own heritage instead of being pegged to existing ones?

In the end we return to Jose Rizal whose monument and memory lie at the center of this controversy. His advice said it loud and clear: “Con el recuerdo del pasado entro en el porvenir (I enter the future remembering the past).”

Much ado about Torre: Rizal asked only for cross on tombstone