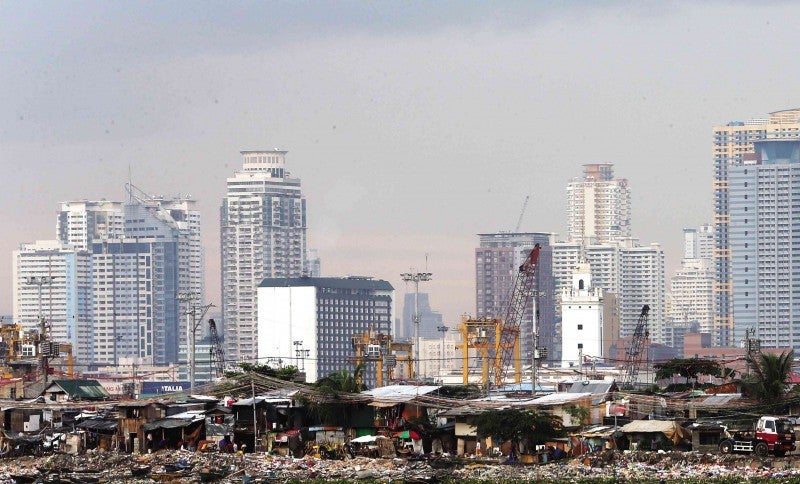 SHANTIES AMID HIGH-RISES Shanties in Baseco, Tondo crowd along the Pasig River in Manila. EDWIN BACASMAS

IF A CITY’S wealth is to be judged by its skyline, then Metro Manila, Cebu and other major cities must be rapidly getting rich. New gleaming skyscrapers, billboards announcing soon-to-be-constructed high-rises and sprawling malls line up Edsa and other major urban avenues in the country.

And yet, poverty has barely budged in recent years and the housing deprivations of millions of Filipinos fester and grow even worse.

Poverty in our country has persisted over the past six decades. The Philippine Statistical Authority reported that poverty rate had been falling but at a slower rate in the past decade.

The economy’s higher and more stable growth in the past decade has failed to raise enough jobs for the rapidly growing population and improve the wage rates of the employed. There is serious inequality in poverty rates across regions.

The government has not taken serious efforts to directly and effectively address the problem of poverty. Several agencies—the Department of Agrarian Reform, Department of Social Welfare and Development, National Anti-Poverty Commission, Food and Nutrition Research Institute (FNRI), and even the Department of Education and Department of Health—have been set up to address particular facets of poverty but none has exhibited competence and dedication to fulfill its mandate.

Malnutrition rate among children and young adults is still high. Large numbers of families continue to live in slums, the incidence of infectious diseases, such as tuberculosis, filariasis and diarrhea, remains significant while there are still rural areas that suffer from malaria and schistosomiasis.

A significant proportion of children do not enroll in primary education and a fairly high proportion of pupils drop out before completing the elementary grades.

These deprivations are not reflected in the official report on poverty since the methodology used is not based on meeting basic needs. It uses a highly simplified construct to estimate the poverty line, which is too low to fully capture the extent and depth of the country’s poverty.

Because of these limitations on official poverty estimates, data are presented on poverty in shelter, food and education. Special attention is drawn to the dire poverty in shelter as evidenced by the widespread presence of slums.

In the last survey of the FNRI in 2013, close to 20 percent of the youngest group of children were underweight. The UH rate tends to be higher than the UW rate among 0- to 5-year-old children.

As children grow, their food requirement rises and if not filled results in stunting. Thus, we find stunting to be lowest among infants of age 0 to 1 year old, but the UW and UH rates increase monotonically every year up to year 3, then remain about the same in year 4 and 5.

Expectedly, income is highly correlated with UW and UH rates. The UW rates monotonically decreased as family income increased from quintile to quintile in both urban and rural areas.

Most serious in housing

The country’s poverty appears to be most serious in housing than in the other basic needs. Slums are widespread in Metro Manila but also exist in smaller cities and towns. Most slums are located in public lands and abandoned private properties that are close to the poor’s sources of livelihood, such as dumps for scavenging, roadsides for itinerant vending and residential areas for domestic services.

There are slums in Manila’s tourist and historical places, such as Intramuros, Ermita and Chinatown, and along major roads, including those that lead to Malacañang Palace. The spacious campus of the University of the Philippines in Diliman, Quezon City, also contains thousands of squatter families.

The poor possibly think they have a right to build their homes on public land and abandoned private properties. The government, on the other hand, has been tolerant of their illegal occupancy considering that it has not offered them much alternative.

Besides, there is a law that allows slum demolition only if an alternative residence is available to the affected families. There is no substantial national or local government program for solving the slum problem through relocation and housing improvement.

The National Housing Authority (NHA) is a fairly large office with six coordinating agencies but has assumed modest objectives and obtained very limited budget. Local governments, on the other hand, have ignored the housing need of their poor constituents.

The slum dwellers represent a large voting population and politicians patronize them with alms for funerals, baptism and wedding celebrations, and medicine in exchange for their vote come election time.

Statistics on these dimensions of the country’s poor housing are provided by the Census of Population and Housing, and the Annual Poverty Indicator Surveys (Apis). We consider housing units of less than 5 square meters and 5- to 9-sq-m shanties made of makeshift materials and built along roads and waterways, at dumps and in some high-value squatter areas.

In Metro Manila, the next larger shelters of 10 to 19 sq m or about 14.5 sq m on average are what we call unstructured makeshift apartments. They make do with whatever materials they could avail themselves of.

Many shanty apartments form solid blocks of three or four story rooms. The shanty apartments are located along major streets of the metropolis, such as Quirino, Osmeña and Araneta Avenues, and in the notorious slum areas of Leveriza and Baseco.

Quezon City has an even larger slum population than Manila. Access to community water and electrical systems appears to be minimal or, if available, are shared by many.

No space for bed

Families in all these types of poor housing are crowded in varying degrees, allowing no privacy among family members and even among neighbors. The smallest shanties of less than

10 sq m have no space for any furniture, even a bed or a table and allow just the bare floor for sleeping, cooking and eating. The larger rooms in shanty apartments of 10 to 19 sq m may have space for small kitchen or a table or a bed.

These shanties are tightly built together so there is no outside space except the sidewalk. Children play on the sidewalks when they empty after office hours. Families are also found to bring out chairs to enjoy the space in the evening. The women would do their laundry and other tasks at some corner of the sidewalk during the day.

The housing situation is slightly better in Central Luzon than in Metro Manila, but very much worse in the three poorest regions of Bicol, Eastern Visayas and Autonomous Region in Muslim Mindanao. The regions outside Metro Manila have a higher proportion of 20- to 29-sq-m houses, which are small but decent independent houses of nipa and other native materials.

We consider dire poverty to be the main reason that discourages families from sending their children to school.

The completion rate in the elementary level was only 75 percent, meaning that about 25 percent of the children drop out before completing the grades. The large proportion of young children (about 25 percent) who do not complete the elementary grades is forever barred from pursuing high school and college, and those who do not enroll in high school lose the opportunity to pursue college education.

Living in shanties with no space for sleeping and studying, and no convenient utilities for bathing and personal hygiene discourages children from going to school. It would take so much more effort by the mother to prepare her child for school when there is no running water and toilet, and cooking space and fuel to prepare food.

Life in the slum damages the dwellers’ very humanity—their dignity, their self-worth and their social identity. It also causes ill health.

The degradation is exacerbated by the nature of employment of slum families that earn their living by scavenging from dumps and other sources of garbage or as itinerant vendors along streets where they face the risk of vehicular accidents and health hazards from air and noise pollution.

Perhaps, we have ignored the problem because we thought it to be so dauntingly massive as to require resources that are beyond our means. But we do have the resources to provide decent housing for all and build it in a decade or shorter time.

The following sources of funding could be readily tapped to eradicate the slums:

President Aquino proudly announced that he had approved a P3-trillion budget for 2015. Simply allowing 10 percent of the current and future budgets for housing would suffice to eradicate the nation’s slums in 10 years’ time.

Based on casual consultations, the approximate construction cost per square meter is P20,000. A 20-sq-m apartment would cost P400,000. It would have a very small bedroom, a small bath-toilet and kitchen. There are 7.321 million slum dwellings.

Building 20-sq-m apartments would cost P2,928 billion. Spreading construction over five years would entail P586 billion. Extending the completion time to 10 years would halve the annual cost to P293 billion. The cost, if spread out over a 10-year period, would amount to less than 10 percent of the current P3-trillion budget and of all future budgets.

Priority may be given to slum clearance in Metro Manila. It would cost P305 billion to build 20-sq-m apartments. If spread over five years, the annual cost would be P61 billion.

Metro Manila earns large and increasing property tax from the rapidly developing commercial and real estates, which could readily finance slum clearance in five years with or without the help of the national government.

(Edita Abella Tan is professor emeritus at the University of the Philippines School of Economics. The full version of this article can be found at www.econ.upd.edu.ph.)

Trump says he plans to invite S. Korea, 3 other countries to G7 summit in September