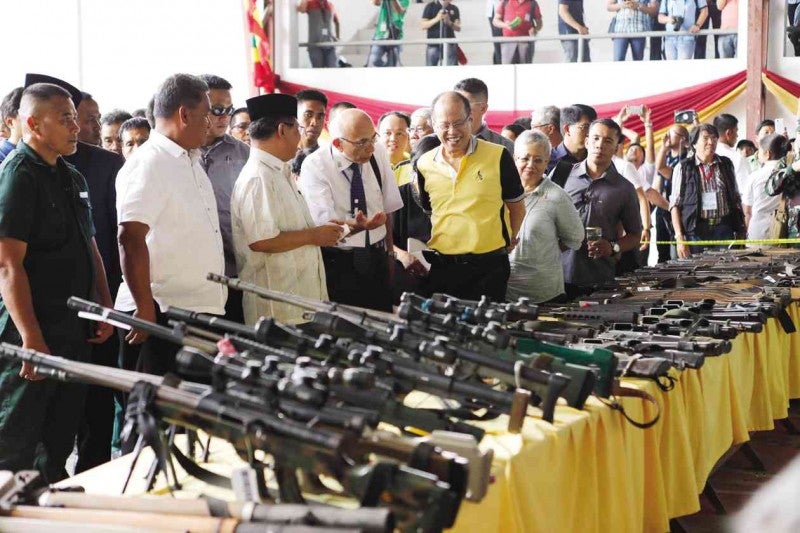 PRESIDENT Aquino’s final State of the Nation Address (Sona) drew strong applause for his call to support the proposed Bangsamoro Basic Law (BBL) and the cause of an enduring peace in Mindanao. The President’s speech was a mix of nostalgia and reality. He spoke of the long struggle for peace and instability across the country, especially Mindanao, and his resolve to end political impunity and corruption.

His remarks were interspersed with evidence on the more than 160,000 criminals arrested by the police, the high-value communist and terrorist targets neutralized, and the more than 29,000 unlicensed weapons seized by law enforcers.

It seemed strange though that on the last point, Mr. Aquino avoided responsibility for the new gun law that was passed under his watch. Republic Act No. 10591, or the Comprehensive Firearms and Ammunition Regulation Act of 2013, enables gun owners to register and carry outdoors up to 15 weapons of various types.

The omission is a glaring one, given the parallel implementation of a decommissioning initiative in the Comprehensive Agreement on the Bangsamoro (CAB) that ostensibly works at cross-purposes.

Simply put, RA 10591 widens the scope and ability to bear arms, while the BBL that will institutionalize the CAB is supposed to ensure the decommissioning of combatants and their weapons, or a simultaneous arming and disarming process. The incoherence and inconsistency, coupled with the rise in ethnic hatred following the Mamasapano tragedy, suggest the very real threat of a spike in gun-related ethnic violence.

The international firearms trade provides a glimpse of the extent of this problem. New data from the Norwegian Initiative on Small Arms Transfers on small arms trade between the Philippines and the United States indicate that local importers and customs officers underdeclared firearms imports from the United States by $2.36 million in 2013. (See table for breakdown of data.)

The data cover only the deliveries of small arms from the United States. It is possible that local importers also underdeclared imports of small arms and other types of firearms from other countries and that some of these weapons have found their way into the gray market. International Alert’s 2013 study on the illicit gun trade in Mindanao points out that undeclared gun imports find their way to the illicit gun trade (Quitoriano 2013).

One must note that the difficult transition process from the Autonomous Region in Muslim Mindanao to the Bangsamoro is occurring amid tensions between Moros, indigenous peoples and Filipinos with deeply entrenched prejudices against Moros. These tensions could ignite violent conflicts as the transition process continues and interests begin to clash. Imagine the bloodshed that can result given the many weapons that are available for use.

RA 10591 allows citizens to use firearms as long as this is for self-defense (Article 1, Section 2). The wording of this clause is quite similar to the US Second Amendment, which states that “[a] well-regulated militia, being necessary to the security of a free state, the right of the people to keep and bear arms, shall not be infringed.” Both protect a citizen’s right to ownership and use of guns for self-defense.

However, RA 10591 requires citizens to prove their life is in danger to be able to get a permit that allows them to carry their weapons outside of their homes. But what constitutes as proof that a person’s sense of security has been threatened is not specified and seems entirely subject to the opinions of those who issue the permit, in this case, the police.

Threats to one’s personal security can be based on negative stereotypes of a specific ethnic or racial group as being overly aggressive or confrontational. When people begin to violently attack others based on the widespread acceptance of stereotypes, systematic racial or ethnic violence ensues.

In the case of the United States, racial stereotypes of blacks have led to mass shooting incidents targeting them on the basis of self-protection.

While Roof could be regarded as an extremist, his violent actions were enabled by loose gun control laws, which gave him access to the weapon he needed to execute his plans.

As a result of the Charleston shooting and the Black Lives Matter movement, Americans are beginning to discuss gun control once again. Some claim that gun control will stop violent attacks against blacks in the United States because extremists will be prevented from doing hate crimes. However, it is important to acknowledge that gun control alone surely won’t reduce racism against blacks. 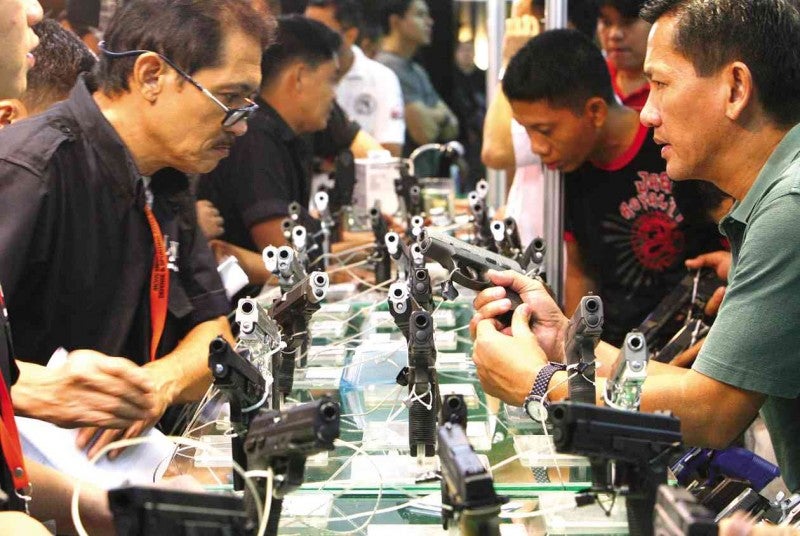 GUN SHOW Various pistols are displayed at the Defense and Sporting Arms Show at a mall in Mandaluyong City. MARIANNE BERMUDEZ

The existence of ethnic divisions and stereotypes in the Philippines provides similar possibilities. Many Filipinos possess stereotypical images of Moros as overly aggressive and prone to violent confrontations against other groups since colonial times.

Anti-Moro sentiments have been increasing since the Mamasapano incident in January. Tensions between Moros and non-Moros within Muslim Mindanao have also heightened amid unclear provisions for indigenous peoples in the BBL. When the ownership and spread of illicit guns coexist with these ethnic cleavages, the potential for violent conflict highly increases.

The Rwandan genocide is emblematic of this phenomenon. In 1993, machetes worth $725,999 were imported into Rwanda (Melvern 2004). Import licenses were issued to acquire the machetes, many of which came from China.

Soon after, the Rwandan genocide occurred. Tutsis were systematically targeted and murdered by the Hutu majority. Machetes were the most common weapons used during the genocide. Systematic ethnic violence was certainly enabled by the increased access to imported machetes.

Do we care enough?

If America’s right to bear arms clause has led to racial violence targeting blacks, it is possible that the Philippines’ RA 10591 may also lead to similar outcomes against Moros.

In the United States, President Barack Obama has constantly railed against the loose gun laws that enable mass shootings arising from identity and racial hatreds. Obama can cite the powerful lobby and tactics of the National Rifle Association to explain his continued failure to undertake stronger gun controls.

Mr. Aquino cannot cite the same excuse, as local gun clubs and associations do not have the same clout. Besides, the President has yet to announce a distinct policy position on the problem of loose weapons.

The Sona underscored the absence of any clear priority and policy to stem the spread of illicit weapons. The government does not seem to recognize the implications of the illicit gun trade on decommissioning and the ethnic violence that can be triggered.

The right to bear arms is based on maintaining people’s sense of security. But when one uses that right to threaten the security of others, the protection of the general public’s security should be prioritized over that right.

(Josephine Ong is a research fellow of the Philippines Program of International Alert UK. Her research interests include conflict, development and international environmental economics.)