The weight of a presidential endorsement 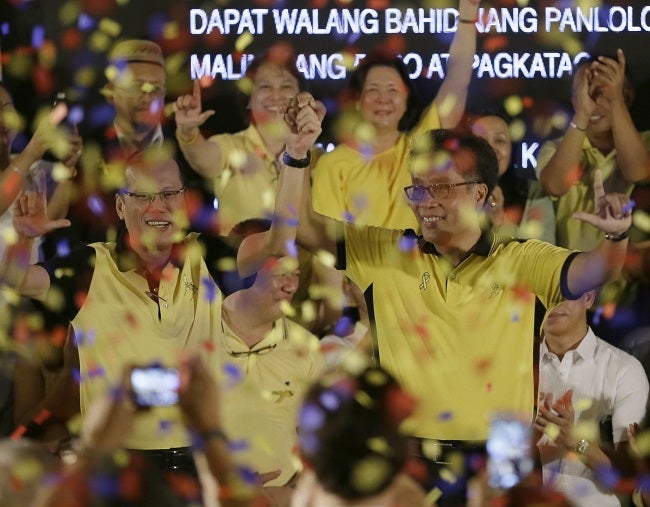 Confetti rain on Philippine President Benigno Aquino III, left, and Interior Secretary Manuel “Mar” Roxas II as Aquino endorses Roxas as the administration’s standard bearer for the May 2016 presidential elections, Friday, July 31, 2015 at the historic Club Filipino in suburban San Juan, east of Manila, Philippines. The 58-year-old former congressman and senator said he was honored to be endorsed by Aquino of the dominant Liberal Party. AP

An incumbent president’s endorsement or—to use a religious term—anointment of a candidate in a presidential election can work in either of two ways. It can be a blessing or a curse, an asset or a liability, a badge of honor or a burden. Most of the time, it is a mix of both. Surprisingly enough, notwithstanding the personalistic nature of our existing political culture, presidential endorsements have made very little impact on our nation’s electoral outcomes.

Between Fidel V. Ramos and Ramon Mitra, who were both loyal to her, President Cory Aquino initially signaled that she would not take sides. But she eventually supported Ramos after the latter lost the Laban party nomination and decided to run under a new, hastily assembled, party. FVR won by the slimmest margin in the extremely crowded 1992 presidential race. Competing in that election were prominent figures that had stood by Cory during the turbulent years following Edsa I. One could understand why she preferred to stand above partisan politics.

In the 1998 election, President Ramos initially found himself torn between Renato de Villa, his longtime friend and comrade in the military, and Jose de Venecia Jr., his party mate in Lakas who, as Speaker of the House of Representatives, had given him an accommodating Congress. Ramos chose De Venecia, hoping that the Lakas machinery and the resources of the administration would be able to offset the tremendous advantage enjoyed by a wildly popular Joseph “Erap” Estrada. Erap won that election by a landslide. Thrown out of office barely halfway through his term, he was unable to groom a successor. Still, while he was in detention on plunder charges, he did everything to get his bosom friend, Fernando Poe Jr., to run against Gloria Macapagal-Arroyo in the 2004 election.

GMA, who had assumed the presidency following Erap’s ouster in 2001, was intensely disliked from the moment she announced she was seeking a fresh term as president in 2004. This sour relationship with the public was aggravated by the countless scandals that defined her transactional presidency, beginning with the “Hello Garci” tapes, which showed the extent of her brazen manipulation of the canvassing of the 2004 presidential votes. By 2010, she had become so unpopular that the best thing she could do for Gilberto Teodoro Jr., her party’s candidate, was to stay away from his campaign. Benigno S. Aquino III won that election with 42 percent of the votes. The capable “Gibo” Teodoro, who could not avoid being identified with GMA, trailed at fourth place, with 11 percent of the votes. His miserable performance at the polls demonstrated in no uncertain terms the unbearable weight of a presidential endorsement.

The 2016 presidential election will likely change that picture. All our presidents, from Marcos to Arroyo, uniformly ended their terms weighed down by poor approval ratings in the opinion polls, and hounded by controversies and problems that eventually defined their presidencies. P-Noy, in contrast, has remained politically buoyant as he approaches his final year in office. In the eyes of the many who entertained doubts about him in the aftermath of Mamasapano, but later gave him back their trust, this President has earned the right to name his successor.

I think P-Noy’s forthright announcement of his personal choice of Mar Roxas as the person most worthy to succeed him will test, for the first time, the true value of a presidential endorsement. At his last State of the Nation Address, he declared that he wants the coming election to be a referendum on his administration. One would be hard-pressed to find any other president who has stood so confidently on his record. Clearly, P-Noy intends to go out and actively campaign in the 2016 election as though he himself were the candidate. In turn, I am sure he expects Roxas not only to continue what he has started, but also to defend it with conviction.

Roxas has repeatedly shown that he is a good team player. He could have quit P-Noy’s Cabinet at the height of the Mamasapano affair, and he would have been instantly rewarded with high presidential preference ratings by an impressionistic public. A political pragmatist who thinks only of his career would no doubt have seized the opportunity. Not Mar; he quietly stood by P-Noy even when he was being jeered for having allowed himself to be bypassed on a matter that belonged to his department. I am sure his low ratings are partly ascribable to this perceived lack of confident assertiveness that we often mistake for leadership.

To sum up: Three questions basically determine the value of a presidential endorsement. Firstly, has the endorser earned the right to endorse his successor? Or, to put it another way, how much political influence does the endorser wield over public opinion? Secondly, to what extent is the endorser prepared to act in order to ensure that his endorsement makes any difference? Another way of putting the same thought: How much stake does the endorser have in the election of his chosen successor? And lastly, how far is the chosen one prepared to defend the record of an incumbent president’s endorsement? The events at Club Filipino the other day have left no doubt about the answers to these questions.

For a presidential endorsement to work as intended, it has to take on the qualities of a relationship built on enduring trust, rather than of a contractual arrangement arrived at by calculation. Looking back, I think it would have been very difficult for P-Noy to justify endorsing anyone else other than Mar Roxas.

Iran ‘can’t act with impunity,’ Biden says after US airstrikes