What I wished to say to Neal Cruz | Inquirer Opinion

What I wished to say to Neal Cruz 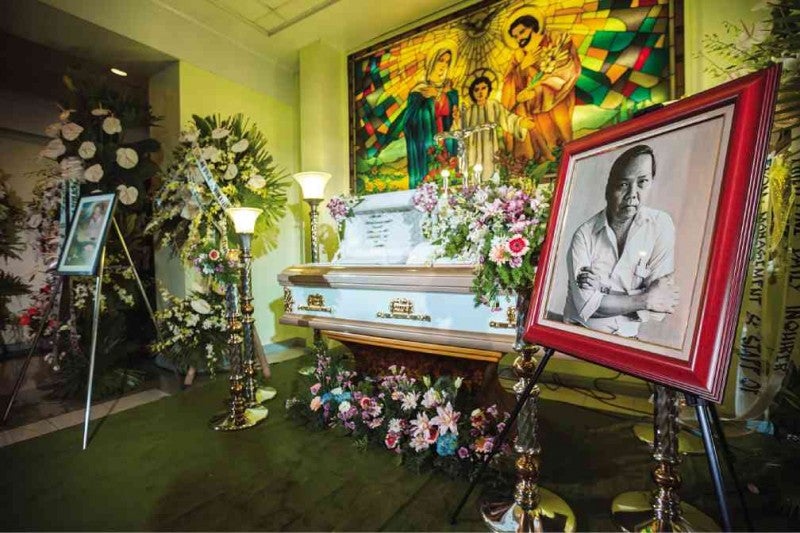 FINAL CURTAIN Friends and colleagues come in droves to pay their last respects to Inquirer columnist Neal H. Cruz at Our Lady of Mt. Carmel Church on Broadway, New Manila, Quezon City. His remains will be cremated today after the 10 a.m. necrological Mass. JILSON SECKLER TIU

Weeks ago I read an excellent piece by the Inquirer’s Neal Cruz titled “Memories of rainy days of long ago” (Opinion, 7/10/15). Everyone who knows me should know how much I obsess over rain and rainy days. I worship the rain. It inspires me. It reminds me that I’m alive. It brings cheer to my days and rekindles hope that whatever happens, the world is beautiful and worth the effort to try hard every single day of my life to overcome all pain and sorrow.

READ: Memories of rainy days of long ago

It was especially inspiring that my favorite writer had the same affinity with the rain, and I felt more connected to him when he wrote in that piece that he grew up in Catmon. Well, I was born and raised in Navotas, which is basically one landmass with Malabon except that a river runs through it, a natural divide to form separate towns.

I wanted to write him, to congratulate him perhaps and leave a few good words, just to show how grateful I was for the wondrous nostalgic feeling he had triggered in me. I somehow felt assured and sort of validated in my belief that the people who are exposed to nature, who grew up at a time and place where the simple life was the only way to live, whom time had spared from the instantaneous gratification of the computer age, are happier, more creative and less cynical.

My feeling was this: If you appreciate the rain, you will never run out of reasons to draw happiness from every place and situation. Your understanding of joy and your ability to capture that joy in its purest simplicity become a natural thing if the mere sight of rain makes your heart smile. Because it means it doesn’t take too much to make you happy, and how lucky can that be? In this day and age of cynicism, happiness takes a painstaking, if at times endless, wait to come by.

There I was, soaking up the joy that Mr. Cruz delivered with his writing. I imagined him to be feeling delighted to just write about it and smiling at the idea that somebody out there, somebody like me, a reader who relates to his writing with such force, was savoring every word that he wrote.

Writers are born, not made. I have ambiguous views on the statement because I truly believe in talent and recognize the difference it makes if two individuals have the same drive and hunger, and equal opportunities. The more talented person should likely have an edge. But writers like Mr. Cruz are the type that continually feeds my lack of conviction on where exactly I should stand between being born or being made insofar as writers go.

I am convinced that it takes a special sensitivity to write—a sixth sense, if I may say so, an almost spiritual attribute that allows one to connect with the present as it unfolds slowly and to comprehend things beyond sensory experience. It’s all about capturing the moment on a purely emotional level and translating the whole totality of human experience into carefully chosen words, as every reader can understand and feel, creating, ultimately, a connection with the writer. That’s what makes writers special, and you don’t become one by sheer talent.

Mr. Cruz found a well from where to draw the power and imagination that fueled his writing, a deep, bottomless well that forms when the mind and the heart learn to appreciate both the great and the mundane things that life has to offer, like experiencing a joyous childhood in Catmon. That kind of childhood, come to think of it, is nothing beyond the ordinary. But when it is seen from the eye of a sensitive writer, the emotions that come to life are simply timeless.

The thank-you message that I intended to write would no longer reach Mr. Cruz. It’s not going to happen because of his passing, and although there was never even a chance encounter that brought the two of us together at any point in time and no such occasion would ever have the chance to happen, I do feel a sense of loss.

Reading the tributes and the outpouring of sympathies in social media from colleagues and readers in these past few days, I was astonished to find that he was 85. The image that formed in my head when I read his column piece about his childhood in Catmon was that of a man still in the prime of life, one oozing with zest and energy, a man inspired and in love with the world.

I thought he wrote with depth and brilliance and the sensitivity of youth, but then again he could have been one of the few who could tell time to stand back and leave him in his perpetual state of youth.

His writings created an affinity with a kindred spirit. Writing about it now eases the emptiness that I feel and soothes the guilt resulting from my procrastination. If I just had the good sense to sit down and spare a moment to write “thank you”… Well, the thing about guilt is that it is usually too late when you realize that you could have done something about it. The Inquirer will not be the same again without Neal Cruz. Then again, as all of us should know, when the rain subsides, life must go on.

Adel Abillar is a private law practitioner with a small office in Quezon City where, he says, “I alternate between being boss and messenger.” He obtained his law and prelaw degrees from Manuel L. Quezon University and the University of Santo Tomas, respectively.

Neal Cruz’s other side, the pussy cat