Philippine sports in the doldrums 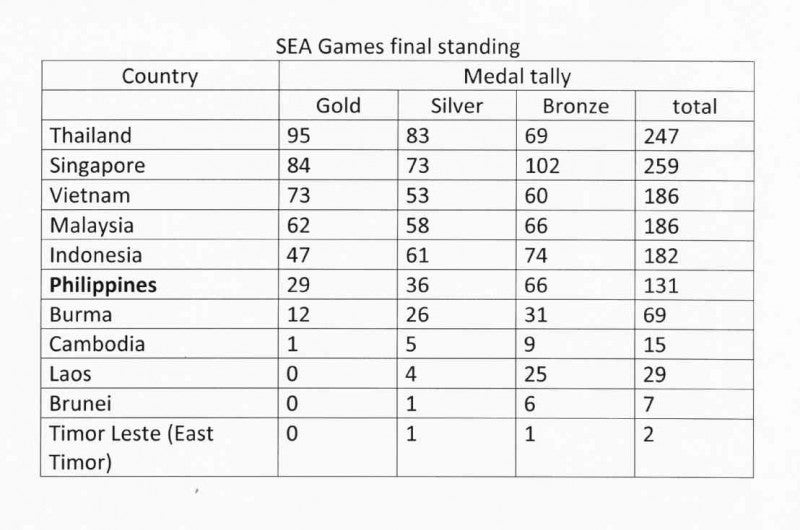 JUST IN case our sports leaders are interested, doldrums refers to a “state of listlessness or despondency; a state of inactivity, stagnation or slump.”

How did we fare at the 28th Southeast Asian Games (SEAG) recently held in Singapore? Overall, out of 11 participating nations, we ranked number six, ahead of Burma (Myanmar), Cambodia, Laos, Brunei and Timor Leste (East Timor) and at the tail end of a grouping that saw Thailand at the top of the list followed by Singapore, Vietnam, Malaysia, and Indonesia.

Perhaps, chief of mission Julian Camacho was hard-pressed to come up with some polite assessment of our participation at the Games. He lauded our athletes, saying that “[t]hey did their best in the Games.”

Aside from leadership problems in the field of sports, there are a few things that set us apart from the five other top-ranked nations in the SEAG:

But going back to the subject of sports, let me refresh our memories on how one of the greatest leaders in the world used sports to unify his people after his inauguration as president.

A year after Nelson Mandela assumed office as the first black president of South Africa, the nation was scheduled to host the Rugby World Cup. Preparing for the competitions, the sports minister told Mandela, “According to the experts, we will reach the quarterfinals and no further.” Mandela replied, “According to the experts, you and I should still be in jail.” Mandela called for the team captain, a white man, and encouraged him to reach out to the community for support. The team responded and South Africa went on to win the championship, defeating heavily favored New Zealand in overtime.

We need this kind of leadership. There is no quick-fix solution to the problem. The kind of discipline that will lead to better performances starts in our classrooms, where children are provided with their first lessons in civic duties and responsibilities. It is here that they learn about love and pride of nation. And hopefully, with this foundation, the leader uses his skills to bring out the best in his people.

Unfortunately, nothing is going to happen over the next few months. Our attention will be focused on the coming elections and everything will be on hold until the new leadership emerges by June 30, 2016.

Given the short timeframe until the next Olympics in Rio in 2016, perhaps we should not raise too high our expectations, unless some drastic and immediate changes are carried out by the incoming national leadership. Our athletes deserve better.

Political notes. Among possible presidential contenders, only Panfilo Lacson has come out with a plan of action to combat the problem of illegal drugs. It was during his term as chief of the Philippine National Police that he applied this strategy, which proved effective in addressing the growing danger to the community.

His approach was two-pronged: market restriction by going after drug pushers and users, and supply reduction targeting sources of the illegal drugs.

Unless this problem is addressed with tenacity and determination, the lives of our young people will remain at risk and society will inevitably have to pay the price for our neglect and complacency.

The latest Pulse Asia survey indicates a continuing uphill battle for Ping Lacson, although he leads by a large margin in the senatorial race. October is just a few months away and he needs to improve his standing if he is to take the plunge.

According to Vice President Jojo Binay, his latest fall in the presidential survey ratings of Pulse Asia is “a wake-up call.”

When we are living in another world—a world of make-believe—wake-up calls make no difference since there is a tendency to hear only what we wish to hear. He has been turned down by Sen. Grace Poe and Davao City Mayor Rodrigo Duterte, and now Manila Mayor Erap Estrada has declined an offer to be his vice presidential running mate. It is difficult to see who could possibly accept the “challenge” to join him in the face of all the problems connected with a Binay candidacy.

By the way, Binay just got reelected president of the Boy Scouts of the Philippines (BSP). This makes him the longest-serving head of the BSP, 19 years and counting.

In case you haven’t heard, Dr. Martin Paiso, “Jojo” to family, is considered by some doctors as the “best doctor for orthopedic spinal surgery.” This, according to former senator Ernesto Maceda, who recently wrote in a Philippine Star column about his experience with spinal surgery (laminectomy).

Our congratulations to Boy and Loli Paiso! The line forms to the right for the best in spinal surgery.

Read Next
When is stupid legal opinion stupid?
EDITORS' PICK
Disease expert: Omicron variant may behave like Delta
This new condo in the South will make you want to turn a new leaf
Smart offers wireless fiber-like speeds to Filipino homes with country’s first 5G Prepaid Home WiFi
Legarda: Ending Violence Against Women, a cause for all
Palace: Malls, establishments may require customers to use of face shields
Syringes for Pfizer vaccine arriving on December 2 — NVOC chairperson
MOST READ
Bongbong Marcos to face another disqualification case
Christine Bersola, Julius Babao cleared of cancer after colonoscopy, endoscopy
A Merry Bongbong
Isko Moreno ‘hopeful’ of getting Duterte’s backing as Bong Go withdraws
Don't miss out on the latest news and information.

Palace: Malls, establishments may require customers to use of face shields