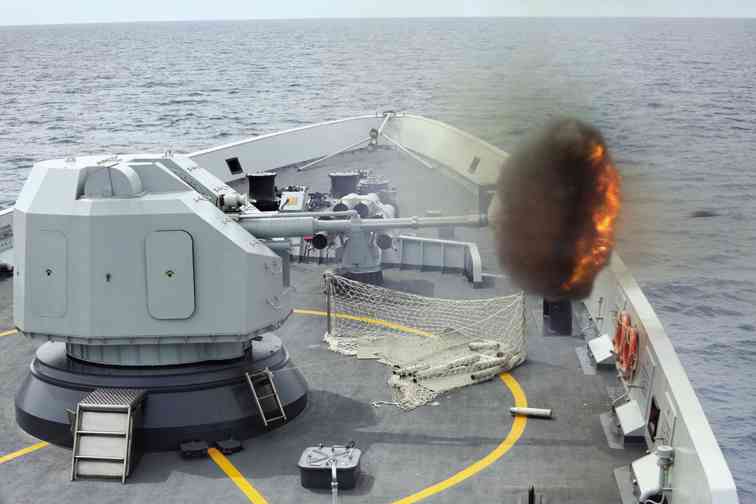 AN ANTISURFACE gun is fired from China’s Navy missile frigate Yulin during an exercise in the South China Sea. AP/BAO XUELIN/XINHUA

It is time to reexamine the internal and external policies that have made us lose effective control over our natural resources, economic activities and even our own State.

For decades, our government has bowed to the impositions of foreign interests, which we have allowed to shape and dictate our policies. These have made us weak and vulnerable. And yet, we declare in our 1987 Constitution that we pursue an independent foreign policy founded on the principles of peace, self-determination and peaceful coexistence.

We have been the object of big powers fighting each other to gain control of our geographically strategic land and its natural wealth.

Today, we are the “bone of contention” of big powers—with China, an emerging world power, challenging US hegemony. Former World Bank chief economist Joseph Stiglitz writes that China has surpassed the United States as a global economic power.

This hegemonic neighbor is claiming almost 80 percent of the West Philippine Sea, where we stand to lose an estimated annual fish production of 200,000 metric tons of fish in major fishing grounds on which our municipal and commercial fishermen depend for a living.

But China should be the first to understand us. China was a victim of Western imperial powers. It was the height of national humiliation for an old civilization like China to be divided like a watermelon by European powers, the United States and later, by Japan. All these threats came from the sea, on China’s southern and eastern coasts.

In 1949, the Chinese people liberated themselves from the control and domination of the West and have since the ’80s, embarked on a massive program of “modernization,” utilizing the methods of capitalism in competing with the West.

Today, there is competition for the world’s oil, gas and mineral resources by the big powers to fuel their capitalist development and growth, which trigger conflicts.

China is aggressively flexing its military power starting with the Association of Southeast Asian Nations (Asean) and South China Sea but at the expense of its neighbors. Do its current actions and statements indicate that it is now implementing its own version of the Monroe Doctrine for Asean and West Philippine Sea (South China Sea), just as the United States did for itself covering the Caribbean and South America?

Soon, like past big powers, it will try to become a full-fledged global military power to protect its expanding global economic interests—Chinese companies, investments, energy supplies and raw materials, as well as the sea-lanes that provide a vital artery for the secure flow of these assets between China and the rest of the world. This is defined in the recently released Chinese Military Strategy White Paper (2015).

While China may view the South China Sea issue through the security prism, what is difficult to comprehend is its annexation of Bajo de Masinloc (Scarborough Shoal). Did the hegemonists ever protest the bombing and strafing of their claimed “territory” when, for decades, allowed the US Air Force to bomb and strafe the Scarborough under the 1947 RP-US Military Bases Agreement?

Overall, the entry of China into the global market for resources is good for the resources-owning countries. So long as China depends on economic competition and not on military muscle, it is good for everyone.

Whether other great powers will allow China to rise peacefully or to control a greater share of the world’s resources is something China alone cannot answer. The laws of international politics exist and China itself will continue to build its national defense to redress the military imbalance with other powers and protect its economic lifelines when the need arises.

That China itself was long a victim of Western imperialism and never, even at the height of its imperial power in the past, engaged in conquest beyond its historical domain, seems to provide a basis for optimism. But we can never really tell because any government or party can change its color. The lesson of the first socialist state, Russia, that turned social imperialist bears this out.

The South China Sea, potentially has oil and other resources, which are certainly important. But even more important is that it is a strategic zone of defense for China as it is its backyard. By and large, China is disrupting the status quo in the Western Pacific, long considered an “American Lake.”

China claims to support freedom of navigation but wants to control military passage through its nine-dash-line seas. Its aggressive actions in Southeast Asian maritime waters—claiming our Bajo de Masinloc and conducting military reclamation projects in the Spratlys—are manifestations that China is following the ways of global capitalism. But provocation breeds counterprovocation.

There is the US Asia Pivot. While Japan is also reacting because its major trade routes for its vital imports such as oil and gas are on the sea-lanes in the South China Sea. China’s flexing of its muscles through aggressive behavior in South China Sea may be a prelude to future confrontation and conflicts.

Now, where should we stand in these big power quarrels?

We must unite as a people and in accordance with our Constitution, defend our sovereignty and territorial integrity from all big powers seeking hegemony and control over the West Philippine Sea.

Let us be consistent with our counterhegemonic position. This means not allowing ourselves to be used as a pawn in the struggle between the big powers. This means resisting attempts to use our territory again as a launching pad to strike at other nations.

We should resist not just the hegemony of an emerging global power but also the current superpower that rides roughshod on our shores, keeps secret Central Intelligence Agency black sites on our territory and installs “Sosus” and “Surtass” sonars under our waters for its own use, while damaging our seabeds and coral reefs.

It would be fatal for us to continue trumpeting the US Asian Pivot ostensibly to counter China in our territorial and maritime disputes with our rich neighbor, using the Cold War paradigm which may not hold water anymore.

Globalization has taken over the Cold War so much so that the economies of China and the United States are so interdependent. So are most Asean economies with China that disengaging is extremely disadvantageous for both parties.

We should aim to bring about a situation where China will realize that reaching a compromise with the Philippines will enhance, not threaten, its security. This is easier said than done but it can be done over time.

The China-Russia border, the longest land boundary in the world, was a much more explosive problem but it was resolved. The Chinese eventually came to the realization that resolving the border disputes would enhance their security. They eventually agreed to a territorial compromise.

If China wants to win the respect of Asean and the world as it emerges as a global economic powerhouse, it should not follow the bad example of western colonial powers (and the current global superpower) in Asia that employed coercion and force in dealing with smaller and weaker countries.

We can use our own soft power approach with China through our influential taipans, academics and professionals who are actively interacting with the Chinese people.

China is also trying to win us over in its strategic competition with the United States for a dominant position in the world. But it cannot expect to win us over if it encroaches on our exclusive economic zone and territorial waters by unilaterally re-drawing its maps.

We can study well and learn from the experience of China’s immediate neighbor, Vietnam.

This country, smaller than the Philippines in terms of population, was able to gain and uphold its independence and higher interests without being a pawn to China or the former Soviet Union, which were once at odds with each other. It is in this context that I speak of not closing bilateral approaches while pursuing multilateral strategies, and engaging in the exchange of views and dialogues with the Chinese people.

Vietnam, which shares a land border with China, taught its larger neighbor and all big power bullies a lesson. A small economy and military are not necessarily an invitation to being pushed around.

Like Vietnam, we must develop and have our own capability to effectively defend what is ours. The Vietnamese freedom fighters, who were once our enemies, showed the French, the Americans and the Chinese that when their independence and sovereignty are threatened, they are determined to fight and win.

The ideal strategic goal is for the Philippines to enjoy the friendship of the United States and China and not be a pawn in their inevitable conflicts. If China can be made to realize that we mean genuine friendship, that our relations with the United States and Japan are not directed against China, then the conditions will be improved for the eventual resolution of our disputes.

We secure the best interests of our nation by exercising control of the territories and resources that rightfully belong to us. The issue is strategy. A strategy that draws us further away from our goals and threatens to reduce us into a pawn in great power conflicts will be tragic for our country and people. A new strategy that seeks to win our case without firing a single shot is still possible.

Activate an effective external defense force that can really protect our national sovereignty and territorial integrity.

Fight if we must and we should fight to win. This means investing in state-of-the art defense capabilities. We cannot depend on the other big power that continues to sell to us obsolete vessels that make us a laughing stock of our Asean neighbors.

We need more Filipino academics, researchers, and political and military analysts to specialize on China, as this neighboring country emerges globally and rapidly into an economic and military power.

We need to understand China’s impact on the Philippines and the Asia-Pacific and to increase our familiarity with the complexities of Chinese politics, economy and governance. To effectively defend and pursue Philippine national interests and sovereignty as the Asian dragon emerges and to engage it as a neighbor, we need to know how it thinks, and what its strengths and weaknesses are. 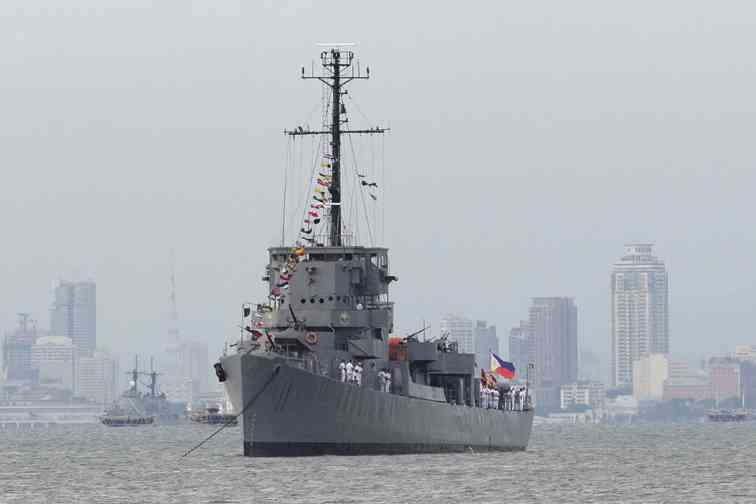 Now even if China is a friendly neighbor, we will still have to deal with it in trade negotiations and in other bilateral relations. The potential for bilateral dialogue and cooperation is still there and it should grow. We can also strengthen our collective activities with Asean in dealing with China and the United States.

We need to understand this giant neighbor with a critical eye from our own perspective and from the vantage point of our national, economic, political and security interests. We need this to be able to effectively stand up to it. Only then can we earn the respect of the world.

(Roland G. Simbulan, a former faculty regent of the University of the Philippines, is vice chair of the Center for People Empowerment in Governance.)