BBL a matter of public interest 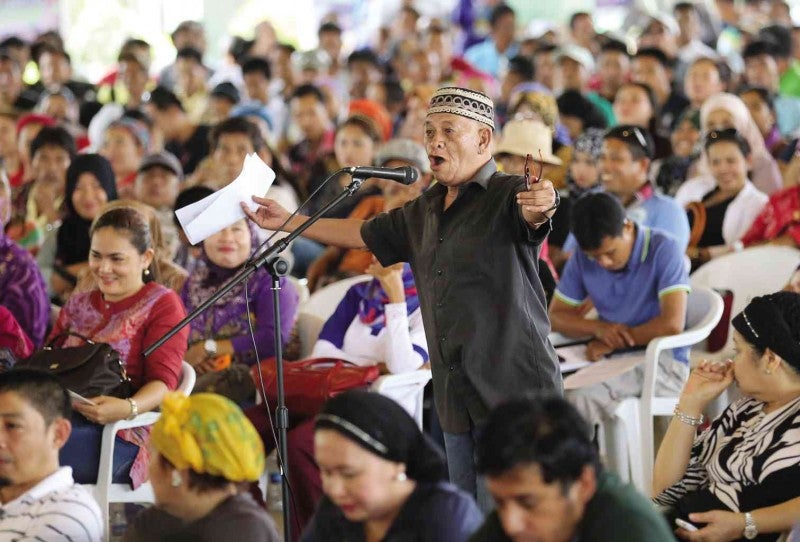 SENATE HEARING ON BBL IN SULU A male participant raises a point during the hearing of the Senate committees on local government, and on peace, unification and reconciliation at the Sulu Provincial Gymnasium in Patikul. RAFFY LERMA

The Mamasapano incident jolted Alliance for Good Governance, Peace and Social Justice, a civic advocacy group that I chair, into realizing that the continuing armed conflicts have exacerbated social injustices being suffered by our poor people in Mindanao.

Mamasapano was also a misgovernance by those who bungled the police Special Action Force (SAF) mission. Thus, there is a need to give justice to the Fallen 44. Let those pinpointed by the Senate investigation as being responsible for the debacle be made accountable before the proper government body. Meanwhile, let us recognize and give tribute to those who died in that battlefield.

View Mamasapano as a microcosm of the larger intermittent and fratricidal war in Mindanao happening for more than 45 years. Think of the many tens or even hundreds of thousands of people killed in this war, Moro and non-Moro alike, and the grave impairment to the development of Mindanao and the country.

This war must be stopped. The early passage of a refined BBL is the answer.

The BBL intends to create a new political entity, the Bangsamoro, to replace the Autonomous Region in Muslim Mindanao (ARMM). Briefly the key features are:

In consonance with the Constitution, the Bangsamoro shall be an autonomous government in Muslim Mindanao.

It is democratic and parliamentary; it is given more powers than the ARMM; and the principles with which the Bangsamoro shall govern the autonomous region are consistent with those of the Constitution.

The Bangsamoro Police shall be part of the Philippine National Police whose organization and operation shall be consistent with the national law.

The national government may create a Bangsamoro Command of the Armed Forces of the Philippines (AFP) within the chain of command of the AFP.

The Bangsamoro shall be under the general supervision of the President.

BBL provides more funding resources to the Bangsamoro compared with those of ARMM to enable the former to build its capacity for self-governance and effectively undertake rehabilitation and development of the region.

The comments and recommendations here are intended to refine the draft BBL to make it more acceptable to our people and to ensure that it is constitutionally compliant.

There must be no ambiguity that what is agreed upon and granted to the Bangsamoro is self-governance within the sovereignty of the republic.

“Those who, since time immemorial, were considered the native and original Muslim inhabitants of Mindanao and the Sulu archipelago and its adjacent islands including Palawan, and their descendants, xxx-xxx-xxx.”

Thus, under this Article II, add another provision to include all inhabitants therein, namely the Bangsamoro people, the indigenous people and the non-Moro people.

This is in accord with the goal of the State to secure its sovereignty and the integrity of its national territory. The term “territory” has a special and particular meaning in international law, as an essential attribute of a sovereign state, aside from the other attributes of people, government and sovereignty/independence.

Territory as defined includes the aerial domain above the landmass. With this grant of territory, the Bangsamoro Assembly can pass laws that will restrict the use of the aerial domain for military and civil aviation.

It is recommended that Article III be retitled from Territory to either Territorial Jurisdiction or Area of Autonomy.

Section 3 should be deleted because it will cause instability to local government units adjacent or contiguous to the Bangsamoro boundary, this section being open-ended. After the plebiscite, the Bangsamoro has no right to interfere with the inhabitants of these contiguous areas.

Administration of Justice; the Bangsamoro government may, however, legislate on matters covered by the Shariah which shall apply only to Muslims and tribal justice system for the indigenous inhabitants of the autonomous region; provided that their application shall be limited by the pertinent provisions of the Constitution, particularly the prohibition against cruel and unusual punishment and by the pertinent national legislations that promote human rights and the universally accepted legal principles and precepts

Powers of the Office of the Ombudsman

Powers of the Commission on Human Rights

This is without prejudice to the Bangsamoro legislating and/or creating offices similar to those in the six items above, to strengthen or enhance respectively the electoral process, the auditing of funds, the professionalization of civil servants, the campaign against corruption, and the promotion and observance of human rights in the autonomous region. However, these regional offices shall be supplementary to the national offices concerned and their functions shall be consistent with pertinent national laws.

This is without prejudice to the Bangsamoro to legislate on education and skills training suited and peculiar to the Moro culture, the funding of which shall come from its general funds.

The Bangsamoro Police (being part of the PNP), its organization and utilization shall be in conformity with the PNP law.

The AFP should have flexibility to accomplish its mission. It may deploy and employ its units or subordinate commands in any geographical area where an enemy force or security threat may exist. Thus, a command of the AFP should not be created only for a specific region, but may be stationed in that region and be given an area of responsibility within which to operate.

The standing coordination protocols to be established governing the movement of the AFP in the Bangsamoro shall be in such a way that the capability of the AFP to accomplish its mission shall not be impaired.

Jurisprudence on constitutional construction is replete with examples that can justify the above form of government for an autonomous region.

We note that the proposed BBL incorporated provisions of Republic Act No. 9054 on an expanded ARMM, authored by former Sen. Aquilino Pimentel Jr., based on the 1996 Philippine government-Moro National Liberation Front (MNLF) Final Peace Agreement. It is recommended that amending RA 9054 in lieu of the total repeal thereof is the better option so as to include the MNLF.

(Alexander P. Aguirre was principal negotiator of the Philippine government-Moro National Liberation Front peace process [1994-1996]. He is a former executive secretary [1998], national security adviser [1998-2001], Presidential Management Staff head and secretary to the Cabinet [1996-1998]. He is also a major general [retired] and a lawyer.)

Read Next
Editorial Cartoon, May 16, 2015
EDITORS' PICK
Here’s How Protein and Calcium Deficiency Can Affect Your Kid’s Health
Groups repeat call for justice, press freedom 34 years after People Power revolt
Desperate to stop spread of COVID-19, countries limit travel
Wilder says costume wore him down before Fury did
Mallorca City: Home of Cavite’s finest industrial hub
‘Are you still alive?’ Virus fears grip South Korean city
MOST READ
Dominguez: ABS-CBN account on unaired ads ‘does not tally’ with Duterte campaign experience
ABS-CBN can’t operate beyond May 4 without a franchise – ex-CJ Puno
Macalintal: No such thing as ‘secret marriage’ amid Sarah-Matteo nuptials leak
No need for Ginebra to reach out to Slaughter, says Chua
Don't miss out on the latest news and information.

No need for Ginebra to reach out to Slaughter, says Chua