Is minimum wage bad for poor? 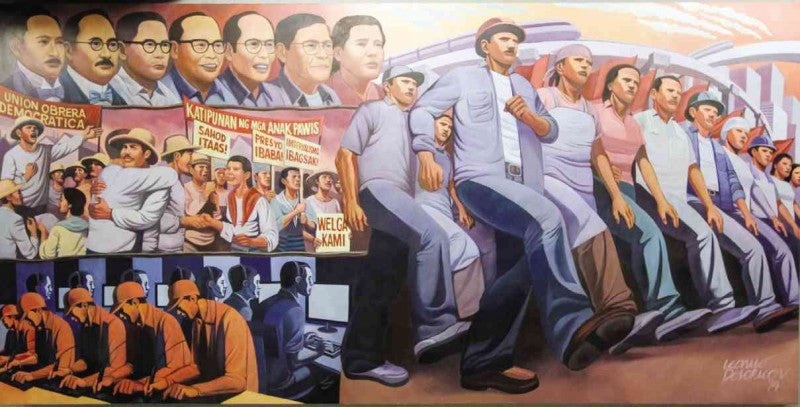 “March of Labor in the Philippines” by Neil Doloricon, one of the 30 paintings at SiningSaysay art exhibit about Philippine history at Gallery Mall in Cubao, Quezon City. LEO M. SABANGAN II

It is one of our most enduring shibboleths: “Workers are entitled to a just wage, which is defined as no lower than a legal minimum wage (LMW). Only in this manner can we reduce poverty and achieve social justice.”

This logic seems irrefutable. However, recent Philippine studies estimating the impact of LMW on employment and household income have raised serious questions about the wisdom of this generalization.

The good intentions behind LMW may have unintended consequences that are harmful if not expressed through appropriate policies. Good intentions, in fact, may end up paving the road to perdition—in this case, persistent unemployment and underemployment, lack of investment and continuing poverty.

Every year, there is a clamor for large increases in LMW. As expected, last January the Trade Union Congress of the Philippines (TUCP)-Nagkaisa and other labor groups, together with their political allies, filed a demand for a huge LMW increase: an additional P136 a day on top of the minimum wage of P466 a day for workers in Metro Manila. [The National Wages and Productivity Commission announced in March a P15 increase in the daily minimum wage in Metro Manila, raising the daily minimum pay to P481.]

The proposed increase was supposedly due to the 36-percent loss in the value of wages—an amount that, by the way, was wildly out of line with the Bangko Sentral ng Pilipinas headline inflation rate of 4.4 percent.

The reader might ask: What would be the economic impact of an increase in LMW, especially such a large one? If we consider how real employers behave in real-life markets, one might be shocked to find out that such an increase can actually be antipoor and antiemployment.

To illustrate: Consider a typical small- and medium-scale enterprise (SMSE). The owner has a limited amount of capital, with which he can hire either 20 workers at the lowest wage that he thinks they will accept, or only five workers at a higher LMW. Since he has no choice but the second scenario, he will of course hire only the five best qualified ones and send the other 15 home to join the ranks of the unemployed.

With only five workers, even if they’re the best of the lot, it is likely that our owner will also end up producing less than he would have produced with all 20. His business volume and profits are smaller, his rate of expansion slower.

If this example is multiplied across the millions of enterprises in our country, we have a situation where the 15 who were sent home, together with millions of others who like them lack skills, will remain unemployed and poor longer.

SMSEs, supposedly the engine of our economic development, are thus the big casualty of LMW policy. Unlike large enterprises, they have little, if any, monopolistic power to control their selling prices, or monopsonistic power to dictate the wages they pay. Without our SMSEs, we will not have the inclusive growth that everybody dreams of.

To add further injury, uncontrolled increases in LMW over time—at the instigation, say, of populist activists and politicians—may trigger an upward wage-price spiral. This inflation will hit hardest the poor, unskilled and unemployed, including the 15 who were sent home.

Rounding out the case against LMW is the concern that an unreasonably high LMW could undermine the country’s international competitiveness. This in turn affects its ability to attract foreign investment in labor-intensive tradable commodities.

In a draft report dated September 2013, the World Bank disclosed that the Philippine minimum wage (expressed in dollars for comparability) was higher than most of its Asean neighbors as well as India and China. (See Table 2.)

More importantly, the same report revealed that the Philippine minimum wage, as a percentage of value added per worker, lies at the high end of a wide range of comparable countries. (See Figure 1.) This is especially true in Metro Manila, or NCR, where the average worker is legally entitled to keep nearly 70 centavos out of every peso he adds in value. This is even higher than the United States’ and is exceeded only by Guatemala’s.

Notwithstanding the general case described above, it is possible under certain circumstances for the LMW to enhance overall welfare. In the special case of monopsony, a given labor market may be dominated by one or a few influential firms, which can set the wages they pay instead of having to match the wages offered by many competing firms.

A labor monopsonist, thus, has the ability to pay its workers below the market, thereby generating excess profits. An LMW forces the firm to share those excess profits with its workers, either through higher wages or more employment.

However, this is possible only up to a point—specifically, when the wage of the newest worker is equal to his expected marginal contribution to revenue. Beyond that point, a higher LMW would incur losses. This forces the firm to stop hiring or even reduce workforce.

There are three important implications from the special case of monopsony:

Labor might be better protected by getting rid of the laws, regulations and other privileges that confer firms with monopsonistic as well as monopolistic powers. This, in fact, is an anchor principle of the Foundation for Economic Freedom (FEF) as a free-market advocacy.

Even when the LMW might be welfare-enhancing in certain types of labor market, this is possible only up to a certain point. Excessive LMW increases are a problem no matter what the market situation is.

The Philippine economy, like many others, is best described as a collection of firms in different types of labor market, ranging from highly competitive to highly monopsonistic. Thus, when evaluating the wisdom of a legal minimum wage, whether for a specific industry or for the entire country, we need to rely, first of all, on what the evidence tells us.

International studies reviewed by the World Bank (2013) found that the impact of LMW on employment is mixed. A similar conclusion was reported by Canales (2014), who however noted, in addition, that the LMW employment effects were generally negative in developing countries.

What’s the story in the Philippines? By way of an answer, we summarize below the findings from available Philippine studies. There are only a few of them but they cover different LMW outcomes and they all use accepted tools of good impact evaluation.

The results are as follows:

Hours of work significantly declined and the probability of gaining and retaining employment fell by about 8 to 22 percentage points, following an increase in LMW (Canales 2014). These adverse employment effects are inconsistent with the predictions of monopsony, leading Canales to conclude that the Philippine labor market as a whole is better described as competitive rather than monopsonistic.

The LMW had a “significant” negative impact on labor force participation by all individuals, notably among the young, inexperienced, less educated and women. These groups presumably showed lower productivity relative to their older, more educated, experienced and male competitors for jobs (Lanzona 2014).

Using the fixed effects model alone, an increase in LMW of 10 percent would lead to declines in labor participation rate (negative elasticities) by -6.36 percent (for all workers), by -5.97 percent and -3.64 percent (among teenagers and young adults, respectively, relative to 50 years old and over) and by -2.36 percent (no schooling relative to college educated).

The average real income of households would have grown faster by about 20 percent—and household poverty would have been lower—if the LMW had increased more slowly over time (Paqueo, Orbeta, Lanzona and Dulay 2014).

The total income of a household with just one minimum-wage earner is likely to be smaller than a household where the wife, and perhaps the older children too, can also work but at lower, market-determined wages. Interestingly, the study finds that a faster rise in LMW significantly increases poverty incidence by 1.7 to 3.0 percentage points.

The LMW had a “significant” adverse impact on employment by smaller firms, those with average assets below P1.1 billion (Lanzona 2014). (See Table 1.) In contrast, larger companies (asset size above P1.1 billion) showed much smaller negative and even some positive, elasticities. These might be monopsonists that enjoy greater hiring leeway because of their size and market presence (Lanzona 2014).

FEF shares the rest of the country’s commitment to protect a minimum standard of living, strive for full employment and provide equal employment opportunities to all. But theory and evidence both show that a legal minimum wage is not a good way to get there and may even work against these laudable objectives. Instead, we offer the following suggestions:

Exempt SMSEs from the legal minimum wage requirement. However, they will continue to support the social protection provided by institutions like the Social Security System and PhilHealth, whose actuarial health critically depends on the laws of large numbers.

Amend LMW laws to allow firms to hire low-skilled workers who voluntarily opt out of the minimum wage.

Minimize labor regulations and practices that discriminate against the poor and low-skilled.

Require future LMW increases not to exceed the official inflation rate and to prove that they will not adversely affect the overall employment prospects of the low-skilled.

Learn from the 4 Ps (cash transfer) program by providing time-bound direct assistance to the eligible poor and near-poor families based on number of days spent working and training by firms. Employers should not have to carry all the burden of putting up with, or improving low-worker productivity. This burden is properly shared by taxpayers at large.

These suggestions should be accompanied by a larger package of supporting reforms. Improvement in agricultural productivity (not land reform) and rice import liberalization will help bring down the cost of rice and other food staples and the resulting need for high nominal wages.

Vicente B. Paqueo Ph.D., recently retired after 25 years with the World Bank in Washington. Gary Olivar is a banking and political consultant. Both are fellows of the Foundation for Economic Freedom, an advocacy for free-market reforms supported by good governance)

INQUIRER.net at 23: We Are You

He ‘should be ashamed of himself’: Remulla scores Parlade

80% of retiring Pinoys not financially prepared