The last population census in the Philippines, conducted in 2010, officially recognized and counted 182 distinct ethnic groups. By this measure the archipelago state is then one of the most diverse countries in the world.

Is such extraordinary cultural diversity an asset or liability to a developing nation-state like the Philippines? Much, I argue, depends on certain crucial choices made by a nation’s founders and leaders.

The idea that such diversity should be protected and even promoted in society is a popular one. Often, we think of the richness in food, music, language and art that such cultural diversity brings.

Various liberal democracies, largely in the western world, have adopted explicitly “multicultural” policies in recognition of diversity’s intrinsic value as well as to counter prejudice and to right historical wrongs that have often been part of the ethnic minority experience in many of these places.

Yet, there is also reason for caution. Many social scientists have produced evidence that ethnic diversity can in fact have undesirable effects. The catalogue of societal ills is long. They claim ethnic diversity may slow economic development, impede the functioning of democracies, foster distrust within society and even negatively impact spending on key public services such as education and health.

The idea is not new. Nearly 2,400 years ago, Aristotle first observed in his description of the ideal polis that “ethnic difference causes faction unless people learn to pull together.”

Perhaps, the least desired and most feared effect of ethnic diversity is its potential to lead to ethnic violence.

Media-driven narratives of the violence observed in places such as Bosnia, Rwanda and Iraq frequently frame such bloody conflicts in ethnic and sectarian terms. Yet, the link between ethnic diversity and ethnic conflict, while strong in the popular imagination, is less clear-cut when we look at the evidence.

Most ethnic and religious groups in the world in fact coexist peacefully. It is only a very small number of groups that actually engage in violent conflict. Instead, a complex interaction of forces, not always immediately visible to the outside observer, is often at work and better explains why certain groups find themselves driven to confrontation but, importantly, others are not.

It is easy to miss the insidious effects of poverty, rising inequality, limited growth, demographic pressure, weak political institutions, low state capacity, poor governance, unfavorable geography, natural resource dependence, environmental degradation and, of course, foreign meddling among the many factors that may contribute to the outbreak of ethnic conflict.

In the Philippines, as the Bangsamoro question continues to dominate public debate, much of the discussion has focused on the future relationship between the Moro majority in the new Bangsamoro Political Entity (BPE) and its non-Moro minorities—primarily Christian settlers and unIslamicized indigenous peoples (some of whom refer to themselves collectively as the lumad). Just over one in 10 inhabitants of the BPE will not be Muslim.

The question of minority protection then is evidently important and much attention is deservedly paid to the issue of minority rights in public discourse and to a lesser extent in the proposed Bangsamoro Basic Law (BBL), the legal instrument that will give life to the BPE.

However, experience from other parts of the world, most recently the ethnic unraveling of the postconflict settlement in South Sudan, suggests there is another “ethnic” question worth considering: the relationship between the different Muslim ethnic groups that will come to make up the BPE.

The Moro comprise at least 13 distinct groups, but six in particular will be numerically significant in the BPE. In order of size, they are the Maranao, the Tausug, the Maguindanao, the Samal, the Iranon and the Yakan.

The term “Moro” is, in part, a construction that has functioned to bestow a collective identity and the impression of shared experience among these different groups. But will this sense of solidarity persist once the BPE is established or is Aristotle’s prediction about ethnic differences likely to prove true? (See Table 1.)

Moreover, we have examples of multiethnic societies that stand as peaceful, functioning nations. Look only across the sea to Singapore or even further afield to even more diverse nations, such as Tanzania and Ghana where an interethnic peace prevails. (See Table 2.)

However, perhaps the most powerful argument against those who warn of the perils of tribalism is the simple recognition that the current architects and the future leadership of the BPE face crucial policy choices that may accommodate ethnic differences and help create the conditions for coexistence. Difference need not lead to division.

If we accept the view that nation-building through cultural homogenization is not a desirable objective in a modern multiethnic society, there remain at least four broad policy arenas relevant to the Bangsamoro context in which decision-makers may be able to wield some influence over how prominent a role ethnicity will play in politics and society.

The choice of electoral system is complex but highly consequential. It provides the incentives and constraints that will shape the behavior of the political elite.

In designing an electoral system for an ethnically diverse society such as the BPE two objectives need to be balanced:

It is important that ethnic and religious groups—particularly minorities—are fairly represented and do not feel excluded from the political process.

Otherwise, you risk the legitimacy of the new government and may even incentivize excluded groups to seek channels outside the peaceful, democratic process to have their voices heard.

The basic choice facing designers is between plurality systems—which tend to lead to the creation of fewer parties and consequently encourage cross-group conciliation—and proportional representation (PR) systems—which tend to lead to the proliferation of smaller parties and consequently improve the representation of minority groups.

The proposed BBL currently sets out the basic outline of a mixed plurality/PR system. However, many of the technical details that will ultimately determine the effects of this basic structure, such as the precise procedures for redistricting and the exact criteria for party registration, remain open for negotiation.

Moreover, the rules for electing municipal mayors and provincial governors also remain undefined in the BBL. If the design of the local and central electoral systems were coordinated, one possibility then may be to aim for ethnic representation at some local level and cross-ethnic conciliation at the central level.

Whatever system is ultimately adopted, however, it should be adaptive to changing demographic and political realities while preventing dominant groups from too easily altering the balance of power in their favor. (See Table 3.)

Where ethnic groups are territorially concentrated, as many are in the BPE, the conventional wisdom prescribes the devolution of power to the local level to permit some degree of ethnic autonomy.

However, the prominence of intraethnic, clan-based politics in the Bangsamoro context suggests this would be wise only up to a certain level—and possibly counterproductive beyond it.

The BPE’s main Muslim ethnic groups are broadly concentrated at the provincial level, suggesting ethnic autonomy at this or some similar spatial level might be helpful. However, at lower levels—municipalities and barangays—local strongmen, often clan leaders, command quasi-fiefdoms. More autonomy may simply make them more powerful.

One strategy then to break up the clientelist networks these local leaders have built is the intelligent redrawing of the administrative boundaries at these lower levels to redirect loyalties from below and resources—such as the Manila government’s internal revenue allotment—from above.

The technique was used to similar effect in Rwanda by the new ruling party uncertain of the loyalties of local mayors following the genocide. Such a strategy, however, would put enormous political pressure on any institution assigned the responsibility for setting such boundaries.

The proposed BBL is currently silent on how the independence and transparent operation of such an institution could be assured, but it would be circumspect to give some thought to this question.

Ethnic differences are often accentuated when they coincide with differences in opportunities and resources. Addressing inequalities defined along group lines then would be a wise policy priority in an ethnically diverse society.

Antidiscrimination laws are a first step toward combating prejudices that may cause or exacerbate inequality of opportunity.

A more aggressive strategy for helping disadvantaged minorities is the adoption of ethnic-based quotas, typically in areas such as education and public sector jobs.

In the BPE, groups such as the lumad and Badjao, for instance, would stand to benefit. However, affirmative action policies of this kind may also contribute to ethnic tensions. Take Malaysia’s bumiputra policy, for example. Such policies then need to be carefully introduced and phased out to minimize both resentments and insecurities with respect to achievements.

Inequities in the sharing of natural resources—particularly mineral wealth and land in the Bangsamoro context—are also powerful drivers of grievance. Moreover, illicit mining and the ownership of land are two important sources of wealth and power for local clan leaders.

As with administrative boundaries then, some thought needs to be given to how the institutions responsible for granting mining licenses, registering land titles and ultimately also for redistributing land will be able to operate impartially and transparently within the BPE. (See Table 4.)

It is not only the behavior of the BPE’s political elite that should be considered, but also the attitudes of its ordinary inhabitants.

Take two policies: language and education. Both, if designed wisely, can facilitate coexistence. The adoption of a common language spoken by all helps build a sense of shared identity and promotes efficient cooperation. At the same time, the right to use minority languages in selected spheres such as in administrative and judicial activities helps build a sense of inclusiveness.

In India, English and Hindi have constitutional status and serve as lingua francas, but individual states have also exercised their right to designate other official languages for themselves.

In education, a single public school system with a civic-oriented curriculum that children of all ethnic and religious backgrounds must attend may contribute to social integration and perhaps even to combating prejudice. This is particularly important in places where ethnic homogeneity is a demographic impossibility, as for instance in Cotabato and Isabela cities.

Ghana’s experience is instructive. It implemented a bold scheme to send children to ethnically mixed boarding schools all around the country. The country stands out in the region for its positive ethnic relations.

These four ideas are described here only in broad-brush terms. There are also other policy instruments available to the BPE’s rulers to manage the ethnic—and indeed the sometimes more powerful subethnic differences along clan and family lines—that will likely define the new nation.

Whether there proves to be unity in diversity will depend on crucial policy choices still to be negotiated by the BPE’s founders and leaders.

(Omar Shahabudin McDoom, Ph.D. is an assistant professor of Comparative Politics at the London School of Economics. One of his areas of specialization is the study of ethnic politics and ethnic conflict.) 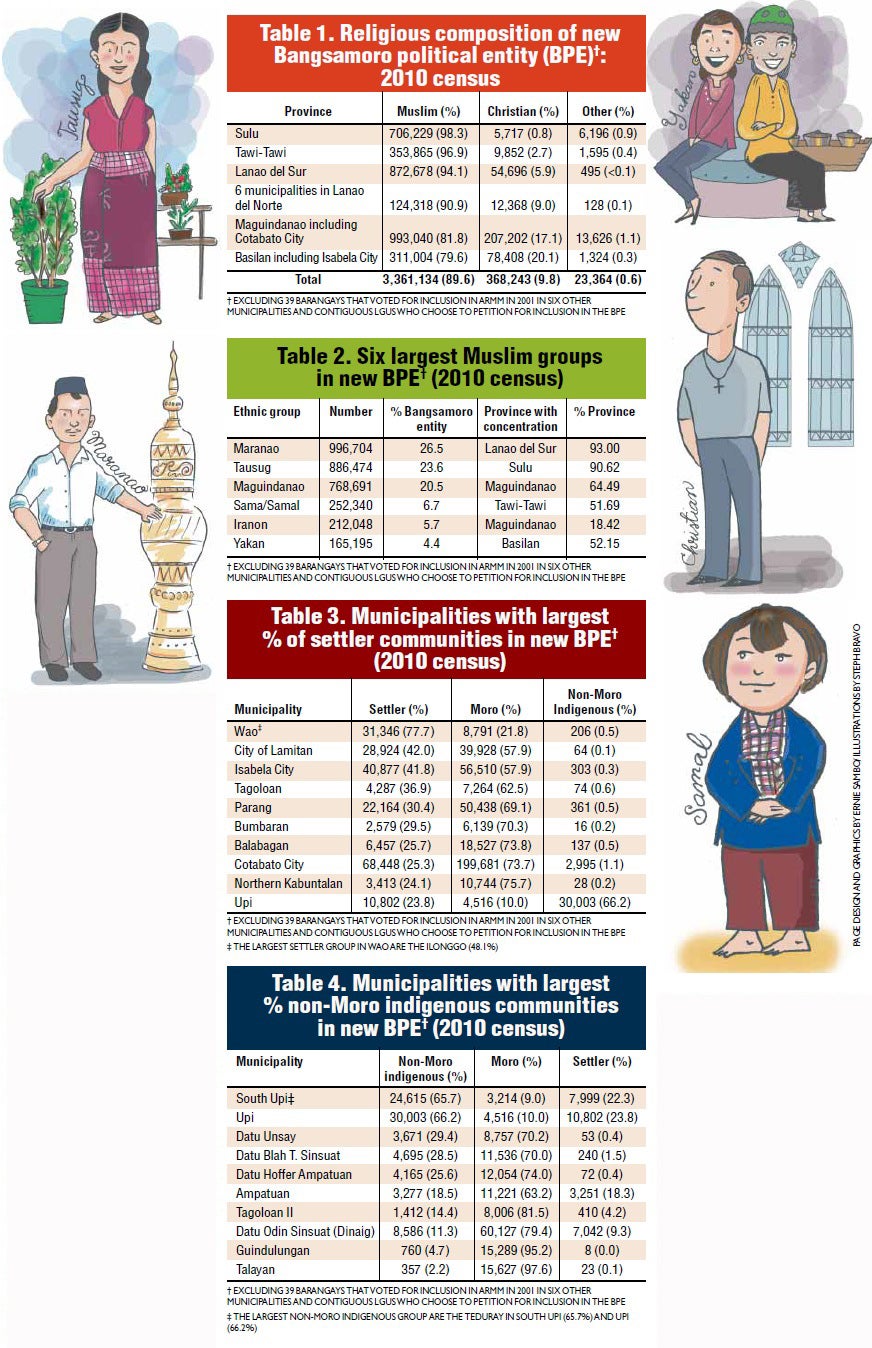