Roll of the die | Inquirer Opinion 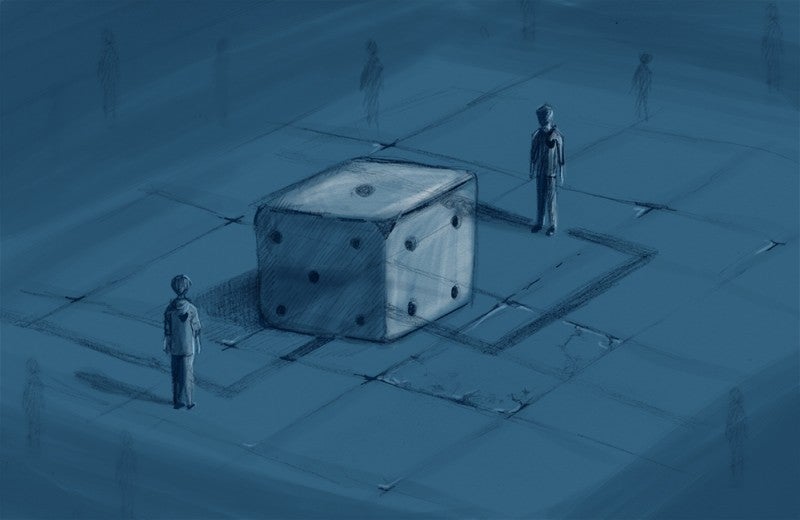 In an episode of “Community,” the characters were trying to decide who among them will go out to get pizza. Naturally, everyone was too lazy to volunteer, so they resorted to rolling a die. At that point Abed, the resident nerd, declared that they were creating six different timelines. He pondered on what those timelines might lead to, and the rest of the episode was spent exploring those different possibilities. It was a fun episode, and the possibilities ranged from gross, to dark, to downright crazy.

It was an interesting concept, how a simple roll of a die could present many different possibilities in our future. It could make one think of destiny, chance, fate or other things like that.

Personally, however, I’ve never been a fan of those things. I’m the kind of guy who believes that everything that happens to us is a direct result of our choices. As long as we have a clear goal in our head, we can arrange the choices we make to reach that goal, and nothing will have to be left to chance.

I met a really great guy while I was a couple of months into a “no boyfriend policy.” I don’t really remember why I put up that policy in the first place. It was probably because I had just finished playing around and was still in the process of figuring out my next steps in life. But then I met him, this charming guy who was smart and funny and everything else I could hope for in a partner. The really great thing about it was that he was also really into me. With every date, every night together, every karaoke session, we found ourselves falling a little bit more for each other.

The fact that he and I met may have been up to chance, but I knew that it would be up to me whether or not he was going to stay in my life. So, one night, in our first out-of-town together, while we were intoxicated with liquor and with the summer night’s romance, I took the plunge and asked him to be my boyfriend.

What followed were some of my happiest days. Our relationship made me remember how wonderful it was to love and to be loved. We went on countless dates, movies, dinners and nights out with friends. We traveled to many different places, met so many people together. But what I loved most were the nights we spent just lying in my bed. We talked, shared with each other the kind of people we had been and the kind of people we aspire to be. And we talked about the future and how happy we were to be facing it together.

We had several problems along the way. There were plenty of times when I wondered what would have happened if I had not asked him to be my boyfriend. What if I had chosen to stay single? What if I had chosen a different guy to be my partner? But no, I didn’t want to linger on those possibilities. This was the path I took not from a roll of a die but from a conscious choice. As long as I kept choosing to stay in that path, I will be able to see it through to the goal of forever.

In my head, I started building a future for us.

I pictured us living in the same house. We would go to work every morning, keep texting each other throughout the day about boring office-related stuff, then plan out our evening as the day comes to a close. We could go on a date or go out with friends separately, either one would be fine. The only thing that mattered was that he came home to me and that I could sleep with him in my arms.

I pictured him meeting my mom. I’d proudly introduce him to her as the love of my life, the one who inspired me to finally get my life together. They would both grow to like each other more and more every time we would be together. Maybe we could even all travel together. They both love traveling and I’m sure they would have so much fun exploring a new place.

I pictured him introducing me to his family. He would introduce me as the guy who helped him through difficult decisions in his work and his finances, and they would appreciate me for it. I would assure them that their little boy was in good hands, and that I would do my best to protect him and make sure that he was happy every day.

Most of all, I pictured us growing old together. One day, decades from now, we would look at our pictures and remember all the beautiful moments that we spent by each other’s side. Then I would take his hand and smile at him. We made it. We are still together after all these years. And we would spend the rest of our lives going through more adventures with our hands held.

It was a great future that I planned for us.

Sadly, we never got the chance to reach it. It wasn’t a single big issue that broke us; it was a lot of little things, little things that I failed to consider as I was working my way toward our future.

It hurts whenever I look at our pictures together. It hurts whenever I reread those messages laced with sweet nothings that we have sent to each other when we are still so in love. The love that we have shared is now nothing more than a memory. All those days we have spent together, all the effort we put into making our relationship work, they are now just part of a road that led to a dead end.

But more than losing what we had in the past, what really hurts me the most is losing the future that I have been so eager to spend with him. I thought that if we worked hard enough for it, we would definitely keep moving forward. I thought that as long as we made the right set of choices, we would eventually reach that goal of forever.

As it turns out, making a choice is just like rolling a die. Every choice we make doesn’t have just one possible outcome. There will always be other possibilities. No matter how hard we work for something to happen, a part of it will always be up to chance.

I’m already too exhausted to roll that die again, to start building another future, but I guess there’s no other way out of this. I have to take that roll, and just be brave enough to face the new possibilities that it will bring.

But here I am today, still stuck in the rubble of what used to be our future. The walls have crumbled and I have to accept that there’s nothing more I can do here. Perhaps it’s time for me to accept that it has fallen apart far beyond repair.

It’s time to dig through the rubble and get that die back.

Jason Paul “Jap” Nishiguchi is a software guy who frequently makes the mistake of trying to approach love as a series of logical propositions. To compensate for this, he likes to read blogs, as they help him understand love from other people’s perspectives.

The Internet remembers us