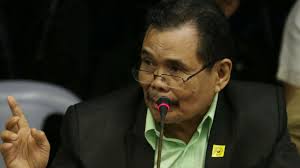 It’s hard to explain how and why the government had to put up with engaging in peace negotiations for 18 years only for the chief negotiator of the Moro Islamic Liberation Front, Mohagher Iqbal, to use an alias in signing the historic and legally binding Comprehensive Agreement on the Bangsamoro.

When Iqbal appeared recently at a Senate hearing on the Bangsamoro Basic Law, he was confronted with questions from startled legislators, questions such as “Who are you? Are we negotiating with a ghost or a true person?” Iqbal appeared on the summons of the Senate committee on local governments to testify on the BBL, which is to provide the legal basis for the agreement that he had signed together with the government’s chief negotiator, Miriam Coronel Ferrer.

Questions about Iqbal’s true identity began to be raised earlier at the House of Representatives’ hearing on the Jan. 25 Mamasapano massacre. In response to questions from legislators who wanted him to confirm reports that he is using a pseudonym to travel, and that he is actually a Malaysian citizen, he refused to disclose his real name, claiming that his real identity is known to the Department of Foreign Affairs.

He released pictures of the passport page showing his biodata to dispute claims that he is a Malaysian citizen, but the name on the passport was blurred to protect his real identity, raising questions that the passport may have been tampered with. “I was born in Mindanao, I will live and die in Mindanao,” he told the hearing.

The plot and the mystery began to thicken from there. Why the use of aliases in public documents? What was Iqbal covering up? Government chief negotiator Ferrer muddled things further by saying: “Mohagher Iqbal is a nom de guerre. It has been used in negotiations since 1997. He has his own name by which he was born.” She refused to disclose the secret name. Iqbal told the hearing: “I have so many names. That is natural.”

Two Mindanao congressmen expressed concern over Iqbal’s use of an alias in important documents such as the peace agreement that was signed in an elaborate ceremony in Malacañang last year. They pointed out that the Revised Penal Code and the Anti-Alias Law under Commonwealth Act No. 142 bar the use of pseudonyms on public documents. But Justice Secretary Leila de Lima said at the same hearing that the law allowed for some exceptions as long as this was not used in concealing a crime. She was, however, unsure whether signing with an alias, like what Iqbal did, would invalidate the peace agreement. She added that as long as he stands by what he has entered into, she did not believe using an alias should be a big issue.