A visual narrative of the Filipinos’ struggle to maintain freedom and sovereignty of their land
Philippine Daily Inquirer / 12:01 AM April 19, 2015

SiningSaysay, from two Filipino words meaning art and history, is a collaboration among three institutions working to make it an innovative way of teaching history. The University of the Philippines (UP), UP Alumni Association (UPAA) and Araneta Center Inc. pooled resources to mount 30 artworks by 28 distinguished alumni, including a national artist of the UP College of Fine Arts.

Guided by historians Dr. Serafin Quiazon and Ma. Luisa Camagay, each artist depicted his vision in oil, acrylic or stone over many months so that the artists became historians themselves, merging the dual discipline of history and art.

UPAA president Ponciano E. Rive-ra Jr. envisioned SiningSaysay as “a tableau of the entire archipelago and a timeline that ends with an ellipsis—dot, dot, dot,” where images of future events can be added later.

The complete collection of 30 large easel paintings are on view at Gateway Gallery on the fifth floor of Gateway Towers, Araneta Center in Cubao, Quezon City until SiningSaysay finds a permanent home on UP campus.

The earliest evidence of writing consisting of line incisions and drawings of human figures, triangles, rectangles and circles were found in the Angono cave in Rizal.

Manunggul burial jar dating back to 890 BC tells of a seafaring people.

Filipinos belong to the Austronesian group, a seafaring people who migrated from either Taiwan or northeastern Indonesia, according to two theories, and were known as boat builders.

“THE GHOSTS OF THE FUTURE” BY GIG DE PIO

Among ethnolinquistic groups, the Visayan Pintados stood out for their body tattoo.

In a barangay, the leader is called a datu and the priestess is referred to as catalonan (among Tagalogs) or babaylan (Visayans).

“THE SARIMANOK AS CULTURAL SYMBOL” BY ABDULMARI ASIA IMAO

Islam reached the shores of Sulu in 1380 with the Tausug as the first group who accepted it as a religion and way of life. The Sultanates of Sulu, Maguindanao and Lanao later resisted military expeditions sent by the Spanish and American colonizers.

“THE WEST DISCOVERS THE PHILIPPINES” BY ARMAND BACALTOS

The Spanish expedition of Ferdinand Magellan reached the Philippines in 1521, which led to the subjugation of natives beginning with the Legazpi-Sikatuna blood compact.

“THE BATTLE OF MACTAN AND CHRISTIANIZATION” BY AMADO HIDALGO

The battle of Mactan caused Magellan’s death and Lapu-Lapu’s recognition as the first Filipino leader to fight foreign aggression.

“THE ONSET OF THE REVOLUTION” BY VINCENT DE PIO

Filipinos responded to Spanish colonialism with revolts. The ilustrado, including Jose Rizal, later demanded reforms. When reforms did not materialize, Filipinos took to waging a revolution led by the Katipunan.

The execution of the priests Gomez, Burgos and Zamora in 1872, the Reform Movement and the execution of Jose Rizal inspired the Katipunan even more in the revolution against Spain.

“THE FILIPINO STRUGGLE FOR INDEPENDENCE” BY AILEEN LANUZA

Emilio Aguinaldo took over the revolution after Bonifacio’s death and accepted the Truce of Biak-na-Bato. Forced to go into exile, Aguinaldo returned when the Americans came and declared Philippine independence from Spain in Kawit, Cavite.

Filipinos, as exemplified by Gen. Gregorio del Pilar valiantly riding his white horse, face the American invaders after Spain lost the Philippines to the United States.

“AMERICAN BETRAYAL OF AN ALLY” BY NORMAN DREO

A least-known hero, Macario Sakay, continued to fight the Americans and was branded a bandit.

“QUEZON AND OSMEÑA ADMINISTRATION” BY ROMEO CARLOS and NORMAN DREO

The Commonwealth government was headed by Manuel L. Quezon and later Sergio Osmeña as President. Osmeña took charge of running the government while the Americans were occupied with the complete liberation of the Philippines from the Japanese.

The Commonwealth government was interrupted by the Japanese Occupation for three years during which the invaders sponsored a republic headed by Jose P. Laurel. But on Oct. 20, 1944, Gen. Douglas MacArthur returned with Osmeña and Carlos P. Romulo, President and Cabinet member, respectively, through Palo, Leyte to lead the liberation forces.

After liberation, the Americans finally granted the Philippines independence on July 4, 1946, signifying the end of American rule. Elected first president of the Third Republic was Manuel Roxas.

Upon the sudden death of Roxas in 1948, Vice President Elpidio Quirino served the former’s unexpired term and got a fresh mandate as President when he won the presidential election in 1950.

Quirino was followed by Ramon Magsaysay, Carlos Garcia and Diosdado Macapagal. Magsaysay endeared himself to the common tao by improving the life of the rural folk. Garcia’s administration is associated with the Filipino First policy of giving precedence to local industries and favoring Filipino capital. Macapagal’s administration takes credit for the introduction of a Land Reform Code and the change in our Independence Day from July 4 to June 12.

The country entered one of its darkest moments with the proclamation of martial law by President Ferdinand Marcos on Sept. 21, 1972.

Filipinos unite to end the Marcos regime through people power. As they marched at Edsa, the people gave their support to the widow of the slain opposition leader Benigno Aquino Jr., Corazon Aquino, who became President.

President Fidel V. Ramos extended amnesty to the members of Reform the Armed Forces Movement, who staged coup attempts against the Aquino administration, and negotiated with the Moro National Liberation Front and the National Democratic Front. President Joseph Estrada headed the celebrations marking the centennial of the declaration of Philippine independence on June 12, 1898.

“THE JOURNEY CONTINUES” BY GRANDIER BELLA

Gloria Macapagal-Arroyo became President as she assumed the unexpired term of deposed President Estrada and gained a fresh mandate in 2004. Her term marked the introduction of automated elections in the country. Elected in 2010, Benigno “Noynoy” Aquino III leads the Philippines to the matuwid na daan (straight path of governance).

INFOGRAPHICS BY LYNETT A. VILLARIBA 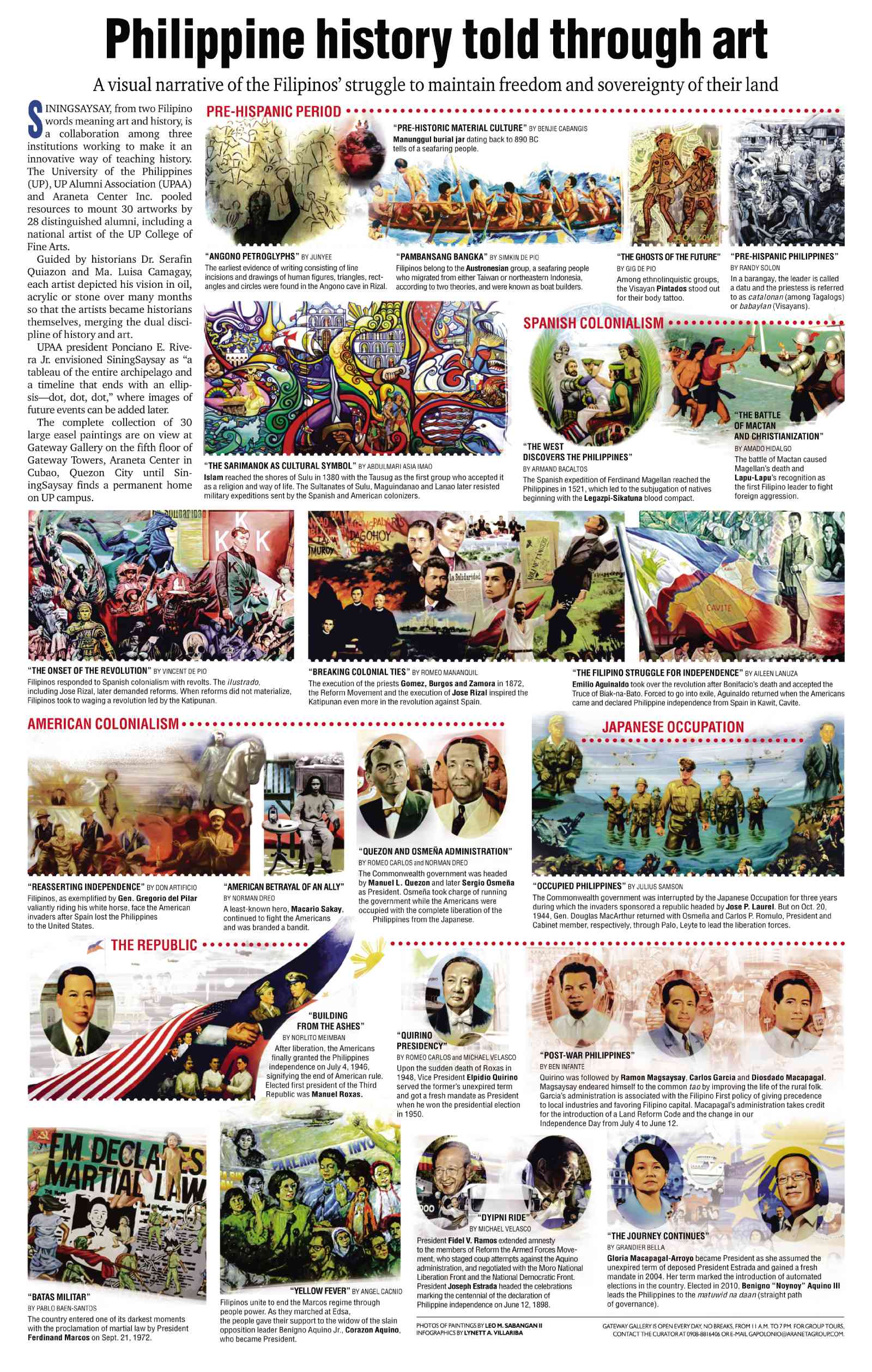