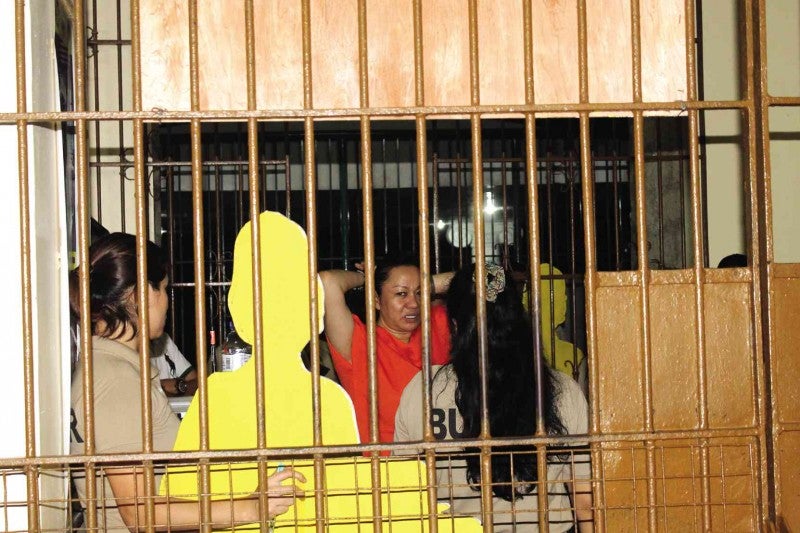 BIG SHOT IN JAIL Alleged pork barrel scam mastermind Janet Lim-Napoles finds herself in a tight squeeze with other inmates at the Correctional Institute for Women in Mandaluyong City, where she will serve a life term after she was found guilty of illegally detaining her cousin and former employee Benhur Luy. Napoles’ conviction, otherwise a momentous development in a notoriously slow justice system, has been greeted with a seemingly collective shrug that does not bode well for the plunder cases filed against her and several senators and congressmen. CONTRIBUTED PHOTO FROM CORRECTIONAL INSTITUTE FOR WOMEN

After a trial of nearly two years, alleged pork barrel scam mastermind Janet Lim-Napoles has been found guilty of illegally detaining her relative and erstwhile employee Benhur Luy for three months, in connivance with her brother and coaccused Reynald Lim, and sentenced to life imprisonment.

The illegal-detention charge stemmed from a falling-out between Napoles and Luy over an allegedly unauthorized loan of P5 million that Luy took out, plus another P300,000 he squirreled away instead of depositing in Napoles’ account. The huge sums, in turn, came from the billions of pesos that were reportedly Napoles’ commission from the scheme which she had engineered with a number of lawmakers and other government officials, and which Luy had helped her manage: the wholesale diversion of the lawmakers’ Priority Development Assistance Fund to bogus nongovernment organizations created by Napoles, after which the funds were divvied up between the lawmaker (who naturally got the biggest piece of the pie), Napoles and her group, and the various functionaries up and down the government bureaucracy who had either looked away or signed in on the anomalous transactions.

Napoles’ conviction would seem to be a momentous occasion in the pursuit of justice against those who had plundered taxpayer money. But what’s notable in its immediate wake is the collective shrug that the public has accorded this development.

Two years ago when the pork barrel scam exploded in the news, the controversy it generated turned into a tidal wave of outrage that would literally reorder the political landscape. Three senators of the realm, longstanding vanguards of the economic and political elite, would end up in detention on charges of colluding with Napoles. The PDAF was declared unconstitutional by a Supreme Court that had affirmed its validity at least twice before then. The system of feudal patronage engendered by the pork barrel system, in which lawmakers freely used the automatic largesse to fortify their hold on their constituencies through doles of public money, lost its institutional foundation. And public anger at the wanton use of government funds also led to the dismantling of the Disbursement Acceleration Program, a Malacañang brainchild that would have allowed it greater flexibility to move around allocated funds to speed up projects, but which the high court said contravened the constitutional mandate that budget appropriation is the province of Congress.

The aftershocks unleashed by the pork barrel scandal are still being felt, and all that can be traced to the court case that opened the can of worms—the illegal-detention charge brought by Luy against Napoles. From that curious incident came tumbling out ever more sordid revelations about wads of cash streaming into the Napoles household, so voluminous that they had to be stacked in the bathtub; lawmakers and their aides receiving money right in their congressional offices; names of various unsuspecting individuals plucked from the newspapers to serve as alleged beneficiaries of the bogus NGO funds; actual farmers and fisherfolk in remote barrios who never received the seeds, fertilizers, boats and other implements that the Napoles-engineered and lawmaker-signed records said they did.

That the public reaction to Napoles’ conviction appears to be of indifference is worrying. Have we moved on that fast? The illegal-detention charge, while a serious case, is not as grave as the plunder cases that Napoles still faces along with Senators Bong Revilla, Juan Ponce Enrile, Jinggoy Estrada et al. Government prosecutors deserve commendation for the good work that led to Napoles’ swift conviction in the first of her many cases. But the more consequential fight is in a different court, and over a different case, and those charges of fraud and plunder have a greater chance of holding up and exacting accountability from Napoles and her powerful coconspirators only if the public remains vigilant and engaged in the process.

It’s too soon, and too costly, to lose interest in the goings-on of the one case in recent Philippine politics that can right the scales of justice by convicting and putting big fish in jail. Justice can be a slog in these parts, but sometimes it does deliver, as in Napoles’ guilty verdict last Tuesday. To ensure that it wasn’t a fluke, public attention cannot—must not—flag now.

Napoles just one of 181 prisoners