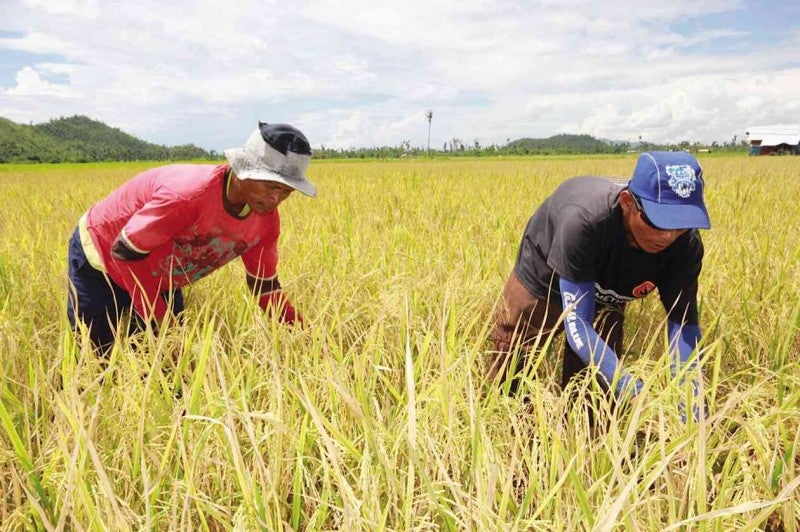 The Comprehensive Agrarian Reform Program (CARP) is in the news again. Various efforts are being waged by the Catholic Bishops’ Conference of the Philippines and civil society organizations, like Task Force Mapalad and the Rural Poor Institute for Land and Human Rights Services, for another CARP extension.

The first group wants to junk CARP but disagrees on the future of redistributive reforms. A more radical faction demands an end to the current CARP and the passage of the genuine agrarian reform bill. Finally, a group of big landowners is simply determined to end CARP.

This Q&A sheds light on the controversies surrounding CARP.

1. Why do we need to address the land issue in the country?

It is axiomatic that landlessness is one of the root causes of poverty in the Philippines. Studies show that fair access to land plays an important role in welfare improvements in rural Philippines.

Measurements of rural inequality show a distressing story. The Gini coefficient of land distribution increased from 0.53 in 1960 to 0.57 in 2002 indicating the pervasive inequalities in access to land that are getting wider. This correlates strongly with the Gini coefficient of per capita income in 2003, which reveals that the richest 20 percent of Filipinos received more than half of the national income while the poorest 20 percent got only one-twentieth (or 5 percent).

Eighty percent of people living in poverty are in the rural areas and they depend on agriculture for their living.

Land reform is the transfer of ownership and control of agricultural land from large private landowners to landless farmers and farmworkers. Agrarian reform goes beyond land redistribution to include the necessary measures that will bring about the economic and political empowerment of an independent peasant class that can produce for themselves a marketable surplus, which can support a sustainable livelihood.

A thoroughgoing agrarian reform results in shifting the economic base of society from agriculture to industry and paving the way for wealth creation and a functioning democracy. This is the historical role of agrarian reform in development. Agrarian reform played a key role in the rapid development of tiger economies of Asia like Taiwan and South Korea.

CARP started in 1988 with the passage of Republic Act No. 6657, otherwise known as the Comprehensive Agrarian Reform Law. It was signed into law by President Corazon Aquino on June 10, 1988. The Department of Agrarian Reform (DAR) was created to implement CARP.

It is comprehensive because of the following:

It is nationwide in scope.

It covers all agricultural lands above 7 hectares, whether private or government-owned, regardless of crop planted and tenurial arrangement, including commercial plantations.

It includes land in the public domain classified as alienable and disposable as well as social and community forests.

It provides for support services to ensure that beneficiaries become viable agricultural producers.

The program was supposed to be finished in 1999 after 10 years of implementation. The failure to achieve its original targets led to two extensions, the latest of which is known as Carper (Comprehensive Agrarian Reform Program Extension with Reforms), which was passed in August 2008.

Carper extended the program for another five years until 2014. With a significant balance remaining at the end of 2014, moves are now underway for a third extension.

Pending in the House of Representatives are two bills that seek to extend CARP:

House Bill No. 4296, certified by Malacañang as urgent, aims to renew the authority of DAR to issue notices of coverage and provide budgetary support for land acquisition.

House Bill No. 4375 seeks to create an independent Agrarian Reform Commission to review actual CARP accomplishments and investigate the circumventions and violations of the law encountered under the program.

3. How many land reform programs have we had since the 1950s?

The Philippines has gone through five land reform programs since the 1950s.

President Elpidio Quirino established the Land Settlement and Development Corp. (Lasedeco) in 1950. Lasedeco was used by Ramon Magsaysay, who was then secretary of defense, to manage the resettlement program for armed peasant rebels of the Hukbong Magpapalaya ng Bayan (more popularly known as the Huk movement), who surrendered to the government.

The Agricultural Tenancy Act aimed to regulate tenancy and transform tenants into leaseholders. In contrast, the Land Reform Act was aimed at expropriating large estates for distribution to tenants.

With the enactment of the Land Reform Code of 1963 (Republic Act No. 3844), President Diosdado Macapagal earned the title “Father of Land Reform” in the Philippines. Though limited in coverage to rice and corn lands, the Macapagal land reform program was arguably the first comprehensive agrarian reform in the country that aimed to abolish share tenancy and provide for agricultural support services, such as credit and technology extension.

These land reform programs suffered from common problems, such as:

Severe limitations of coverage imposed by the politically powerful landlord elite in Congress during the premartial law period and in the corridors of power during the martial law regime;

Severe limitations of funding; and

Aside from limiting land reform coverage to tenanted rice and corn lands, severe limitations were also imposed by the landlord-dominated Congress in the form of high retention limits of up to 600 hectares.

The DAR and DENR claim that the past 25 years of CARP has led to the distribution of 8.25 million hectares, just a shade below 90 percent of its actual target of 9.21 million. These lands were parceled out to 5.43 million beneficiaries.

However, these accomplishments are highly contested. If we were to compare these figures with the original scope at the beginning of the program, DAR would have accomplished 80 percent of its target, with a balance of at least 2 million hectares.

Notwithstanding the criticism, the figures demonstrate that CARP has succeeded in covering a substantial portion of its total target scope despite the many problems that affected program implementation.

Thus, it is incorrect to simply dismiss CARP as a failure. Former constitutional commissioner and staunch agrarian reform advocate Christian Monsod notes that, “… the landowners are simply wrong in the assertion that CARP has failed. It has underperformed but it is not a failure ….”

He went on to castigate the landlords in Congress for setting up the agrarian reform program to fail and then utilizing these “failures” to scrap the program.

5. Did CARP result in improvements in beneficiary incomes?

DAR surveys and case studies conducted among agrarian reform communities across the country found impressive results in terms of improved household incomes and rural poverty. Incomes of agrarian reform beneficiaries were higher than regional poverty thresholds across the board, ranging from a low of 18 percent to a high of 122 percent.

Despite the limitations of the studies, the evidence strongly suggests that given the necessary package of program support, land distribution will result in dramatic improvements in welfare. The surveys prove that agrarian reform can succeed in the Philippines given the correct and adequate support granted by a developmental state.

Welfare improvement is an important indicator of success of an agrarian reform program. In countries with successful agrarian reform experience, such as South Korea and Taiwan, land reform resulted in the reduction of inequalities in wealth distribution. This had the effect of raising educational levels and facilitated rapid industrialization.

In South Korea, the expansion of primary school enrollment was credited to successful agrarian reform implementation. Expansion in education, in turn, contributed to professionalization of the bureaucracy, developing active citizenship, rapid industrialization and growth in the national economy.

6. What are the challenges faced by CARP?

According to figures provided by the Presidential Agrarian Reform Council, by Dec. 31, 2013 or a quarter-century of land reform implementation and two extensions, there was still a shortfall of about a million hectares of undistributed land. Admittedly, these private agricultural lands are the most problematic, contentious and difficult to cover.

Lands that had been classified as distributed still continue to be under the control of landowners. Farmer-beneficiaries have not been able to take actual possession because of armed, violent resistance by landowners.

Among the most notorious loopholes of CARP is the Voluntary Land Transfer scheme where landowners connive with DAR officials to “distribute” lands to dummies, or to fictitious beneficiaries.

Overpricing and legal maneuverings frustrate actual coverage. Disagreement on land valuation among government, beneficiaries and landowner results in interminable delay of land acquisition and distribution. This is often combined with legal maneuverings to thwart coverage.

Other practices that result in agrarian reform reversals include the cancellation of certificates of land ownership awards and reduction of scope coverage. The latter alone has resulted in over a million hectares taken off the land distribution target of CARP.

Through the power of the purse, the landlord-dominated House of Representatives, which prepares the national budget, has notoriously underfunded CARP implementation.

7. Should CARP be extended?

The empirical evidence underscores the positive impact of agrarian reform as a necessary ingredient in successful poverty reduction, wealth creation, industrialization and rapid economic development in many highly developed economies.

In the case of South Korea and Taiwan, the successful implementation of agrarian reforms contributed to rapid industrialization by expanding access to education and moving capital resources from agriculture to industry. Conversely, the same studies have shown that failure to complete agrarian reform has impeded industrial growth in the Philippines.

CARP has made significant contributions despite its limitations. Where support was adequate, the program enabled dramatic improvements in incomes of beneficiaries. In many instances, program underperformance has little to do with the law, and is instead a function of the determined, fully funded and organized resistance of landowners.

Studies have underlined the strong correlation between landlordism, patronage and corruption. As inequalities widen in political democracies, competition from progressive, accountable and rural-focused parties and groups will provide the elite with substantial incentives to buy votes from poor rural households dependent on patronage relations.

For the nth time, high levels of corruption and patronage may reign supreme in defeating agrarian reform.

There is no alternative to a rapid successful completion of agrarian reforms if we desire a peaceful and developed nation.

(Billy de la Rosa is program officer of ICCO, a Netherlands development agency, which has supported programs on agrarian reform and rural development in the Philippines for well over 40 years. He earned his master’s degree in business studies from the University of Buckingham and the Royal Agricultural College in the UK. He wrote his thesis on industry strategy of the Philippine coconut industry. His research on the impact of “European Union’s Common Agricultural Policy on the Philippine Coconut Industry” was presented in various international conferences and used as input in policy.)

Hacienda gate stands in way of CARP in Quezon