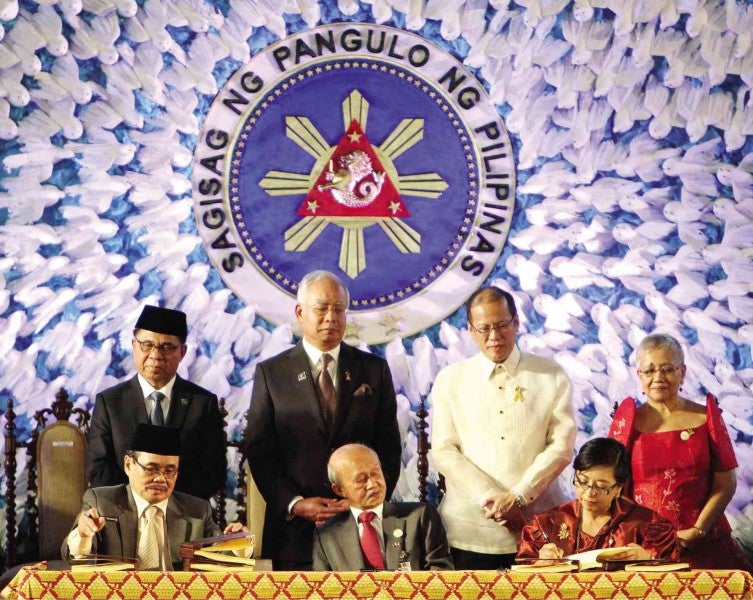 The proposed Bangsamoro Basic Law (BBL) was up for congressional approval this month following Malacañang’s schedule. Then the Mamasapano tragedy happened. The bill remains pending at the committee level in both chambers of Congress, with legislators promising to scrutinize it carefully.

1 Will the BBL carve out an independent territory in Mindanao?

Legal pundits have charged that the proposed BBL will create a substate and is therefore unconstitutional. Will it? The BBL will indeed create the Bangsamoro region that will enjoy an enhanced autonomy that other regions do not enjoy but it is far-fetched to consider this as the genesis of a separate state.

The Bangsamoro won’t deliver the four essential criteria to become a state, as set by the Montevideo Convention. It will have a permanent population, a defined territory and a government but not the capacity to enter into relations with other states—the fourth criterion. That power will remain lodged with the central government.

The BJE would also have an associative relationship with the central government. An associated state, according to the Supreme Court, is a status conferred on states that are on their way to full independence. The 1987 Constitution does not recognize the concept of association, allowing only the creation of autonomous regions in Muslim Mindanao and the Cordilleras.

The Bangsamoro autonomous region can have a bigger territory than the present Autonomous Region in Muslim Mindanao (ARMM), depending on the results of the plebiscite. It will also have more avenues to raise revenue. While the Bangsamoro will have an asymmetric relationship with the central government, which will give it a status higher than that of a local government unit or administrative region, it will remain under the control and supervision of the President.

2 What will happen to the ARMM?

The BBL will repeal the laws that established the ARMM, thereby abolishing it, but the leaders of the Bangsamoro that will replace the ARMM will not start from scratch. The BBL will transfer the powers, assets and personnel of the ARMM to the Bangsamoro, although offices created through laws passed by the ARMM’s legislative assembly will be gradually closed.

The BBL provides for a period of transition from the ARMM to the Bangsamoro, which will be overseen by the Bangsamoro Transition Authority (BTA), the interim government. Under Malacañang’s original schedule, there would have been roughly a year between the dissolution of the ARMM and the first election for the Bangsamoro parliament in May 2016. However, as the BBL remains pending at the committee level in Congress, with approval possibly in June yet, the BTA will have limited time to draft and implement a transition plan. Legislators may consider lengthening the transition period so the shift will be smooth.

3 Will the BBL create a separate Moro police force?

The chief duties of the Bangsamoro Police will be to enforce the laws of the republic and the Bangsamoro, maintain law and order, ensure public safety, prevent crimes, arrest criminals, conduct searches and seizures, and initiate drives for the registration or surrender of loose firearms. The regional police group will be headed by a director.

The turnover of high-powered weapons was originally scheduled in February but this has also been delayed following the BBL impasse. The first phase may be ritualistic at most, but without this, the two parties cannot proceed to phase 2, which should be completed by the time the BBL is ratified by voters in the areas that will comprise the Bangsamoro.

It may get worse before things get better. Various groups may see it in their interest to sustain the Mindanao conflict and spoil the political process that underwrites a lasting peace in the region.

The MNLF is, at best, a divided force. The Misuari-led faction rejects the BBL and feels excluded. The Zamboanga siege of 2013 demonstrated its resolve to block the GPH-MILF peace deal. Meanwhile, the BIFF is an MILF-splinter group that insists upon the establishment of an Islamic and separate Moro state. These groups will continue to undermine the peace in Muslim Mindanao, and may even, in the future, forge alliances with other disgruntled political elites.

7 Will the Bangsamoro provide a haven for terrorists?

The key ingredient in stemming extremism and terrorism is the ability of a strong and responsive government to meet the basic needs of its people and provide the security and protection that everyone desires. Until these conditions are met, the Armed Forces of the Philippines will have to deal with internal threats instead of focusing its intelligence efforts and firepower on the growing external threats in the Asean (Association of Southeast Asian Nations) region.

8 Will the BBL require a huge item on the national budget?

The national government will shell out more to the Bangsamoro than to the ARMM to allow it to catch up with the other regions of the country. At the same time, the BBL will allow the Bangsamoro government to calibrate its revenue-earning powers to be able to spend on things the region needs and will need.

The national government will provide the following: P1 billion for the transition from the ARMM to Bangsamoro

Special development fund amounting to P7 billion in the first year after the BBL’s ratification and P2 billion per year from the second to the fifth years; and

Development funds, which will finance infrastructure and other development projects including provincial and municipal roads, in the first year following the BBL’s ratification and five years thereafter.

The 2016 annual block grant, computed at 4 percent of the BIR’s net internal revenue collections three years prior and less the local government units’ internal revenue allotments, will amount to P27 billion, the government has said. This, plus the transition and special development funds, will add up to P35 billion, higher than the P24.3-billion ARMM budget for this year.

The BBL will greatly expand the Bangsamoro’s sources of revenue. The Bangsamoro government will be able to collect capital gains, documentary stamp, donor’s and estate taxes, which the ARMM now cannot do. It can collect tolls on bridges and roads and a portion of the income tax from corporations headquartered elsewhere but doing business in the Bangsamoro.

The Bangsamoro government will also keep its share in the income from natural resource use as well as the national government’s 25-percent share in the taxes, fees and charges collected in the region for 10 years.

9 Will the BBL bring development to the region?

It promises to. Recognizing the region’s backwardness after decades of conflict, the BBL provides that, “The Bangsamoro government, with funding support from the central government, shall intensify development efforts for the rehabilitation, reconstruction and development of the Bangsamoro as part of the normalization process.” Normalization refers to the transformation of conflict-affected communities into peaceful, progressive communities.

The promise of peace and economic development through the BBL has piqued the interest of investors and donors in the Bangsamoro and other parts of Mindanao. Indeed, some people believe that the principal benefit of the peace agreement and the BBL will be an increase in aid and investments in other parts of Mindanao, before businesses begin putting their money in the Bangsamoro.

The growing interest and willingness of domestic business groups and foreign investors to invest in Mindanao are now threatened by the delay in the passage of the BBL. In the final score, the loss of these investments and their impact on jobs and livelihoods and the promise of genuine human development will be a far bigger tragedy than Mamasapano.

(Eddie Quitoriano is a member of the Mindanao Multi-Stakeholder Group  [MMG]. Drawn from the private sector, community groups, clans, local government, indigenous peoples and research outfits, MMG is a think group that explores the links between violence and exclusion from a multistakeholder perspective, building on the “Inclusive Peace in Muslim Mindanao: Revisiting the Dynamics of Conflict and Exclusion” study published by International Alert in 2009. )