Who blinked on DAP? 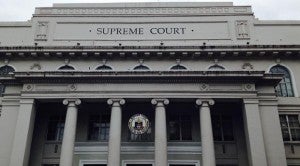 Last year, the Supreme Court struck down the Disbursement Acceleration Program, President Aquino’s stimulus package to fast-track high-impact budgetary projects. In what initially appeared as a looming showdown with the Court, the President was miffed that his program was presumed to have been conceived in bad faith. Earlier this week, the Court announced its ruling on the government’s appeal (technically, a motion to reconsider). It is widely read as a “win-win ruling” where both sides go home happy. That’s correct, but it looks like the Palace has won much more than initially thought.

What exactly did the anti-DAP forces win? The Court, by a 13-0 vote with two abstentions, disallowed the “cross-border” transfer of funds across the separate and independent branches of government and the premature declaration of “savings” so that these funds can be “realigned” for other purposes.

Indeed this is a victory. The DAP had enabled the President to skirt the strict rules requiring prior congressional authorization. The President sniffs around for slow-moving projects, declares the unused funds for those projects as “savings,” and then proceeds to realign them for other uses.

The Court affirms the existing constitutional lines of authority over the budget. It says that public money may be spent only as “appropriated” by Congress and that those “appropriations” may not be transferred to other uses. The President identifies his projects and priorities and proposes them to Congress, which then approves these specific “items” in the annual budget. However, the Constitution also allows the highest officers of the land to use “savings” from their respective allocations to “augment” the funds for other uses, provided these are previously authorized as “items” in the budget.

Their real victory, however, lies in that the Court affirms that the program’s “authors” remain liable, while exempting the mere “proponents and implementors.” Those “authors” are, of course, President Aquino, Budget Secretary Florencio Abad, and their cohorts, while the “proponents” are the lawmakers who make their own wish list of projects. Given our volatile politics, this is fraught with mischief because it pits the President against the lawmakers.

And what did the pro-DAP forces win? The Court had earlier struck down all DAP spending for projects not covered by a congressional appropriation. That is still required, but the Court is now more liberal in construing what it means to be covered by an existing budget item. It is no longer necessary to locate the use of DAP funds under a specific “allotment class” within a budget item.

Even more important, the government is now allowed to make a case-by-case “factual determination,” in contrast with the across-the-board invalidation under the original ruling. Moreover, the Court reads the power to declare “savings” more liberally in favor of the President, saying there is no need to wait until the end of the year to do so because that would defeat the purpose of the constitutional power to realign savings.

But the real victory scored by the government is that the Court has clarified what it meant with its ominous paragraph in 2014 that the good faith presumption “cannot apply to the authors, proponents and implementors of the DAP, unless there are concrete findings of good faith in their favor by the proper tribunals.” The Court now says that it “did not throw[] out the presumption of bad faith” and, as the Inquirer reports, it will indeed clarify that the omens of 2014 were mere side comments (“obiter dicta”) that do not form part of the binding rules laid down by the Court.

Finally, the government also earned an express recognition by the Court, not at all grudging, of the “encouraging effects” and “laudable purposes” of the DAP. In other words, speaking of the rhetorical power rather than legalistic impact of Court decisions, the government has scored a double-whammy. It neutralized the negative innuendo about the presumption of bad faith, and gained a hortatory thumbs-up from a unanimous court.

The Marcos-era courts were criticized for practicing “judicial statesmanship” to keep their peace with the dictator, instead of simply deciding “according to law.” This recent decision is not quite in that mold, because while the original decision may have been overly strict in applying the rules, it was also a bit overeager in making political capital over the DAP’s stretching of the rules. That showed a lack of prudence, and this week’s ruling merely restores the DAP debate back to the sphere of sober thinking and common sense.

Read Next
Justo Takayama Ukon
EDITORS' PICK
OVP: Pilot’s claim vs Robredo ‘never happened’, a ‘malicious fabrication’
House energy committee chair Arroyo bats for cheap electricity
PH detects local transmission of Omicron subvariant BA.2.12.1
Petition to reverse Comelec decision on Bongbong Marcos’ DQ case reaches SC
Luxe property: A way to build, preserve wealth
Honolulu Café is the cure for your Egg Tarts and Roastings cravings
MOST READ
Heart Evangelista gets a ‘no’ from Chiz Escudero after asking, ‘Do I deserve a bag?’
Man posing as Marcos spox revealed to be an inmate in Bilibid — Guevarra
Congress canvassing of votes for president, VP to begin May 24
The muddled past of Nutribun
Don't miss out on the latest news and information.

newsinfo
OVP: Pilot’s claim vs Robredo ‘never happened’, a ‘malicious fabrication’
newsinfo
House energy committee chair Arroyo bats for cheap electricity
newsinfo
PH detects local transmission of Omicron subvariant BA.2.12.1
newsinfo
Petition to reverse Comelec decision on Bongbong Marcos’ DQ case reaches SC
business
Luxe property: A way to build, preserve wealth
pop
Honolulu Café is the cure for your Egg Tarts and Roastings cravings
entertainment
Heart Evangelista gets a ‘no’ from Chiz Escudero after asking, ‘Do I deserve a bag?’
May 17, 2022
newsinfo
Man posing as Marcos spox revealed to be an inmate in Bilibid — Guevarra
May 17, 2022
newsinfo
Congress canvassing of votes for president, VP to begin May 24
May 17, 2022
newsinfo
The muddled past of Nutribun
May 17, 2022
newsinfo
Closure order vs Megaworld Corp halted as firm vows cooperation with BIR – exec
May 17, 2022
newsinfo
CebuPac places pilot under disciplinary review after ‘baseless’ post vs Robredo
May 17, 2022