Faith cannot stop at the most moving Mass of our generation 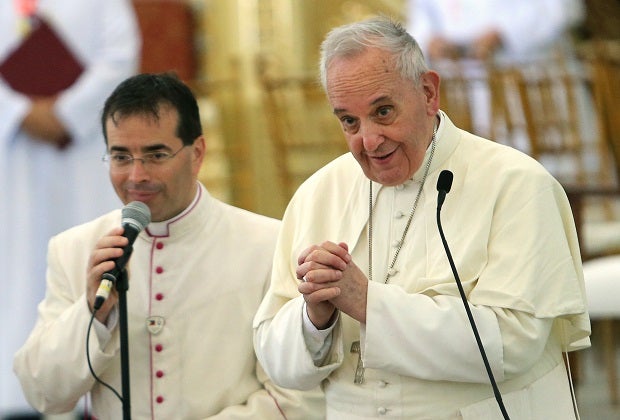 Pope Francis waves to the crowd asking them to pray for him as he says sorry after cutting short his stay due to weather brought by typhoon Amang at the Palo Cathedral. INQUIRER PHOTO/RAFFY LERMA

A year ago, the Catholic Church in the Philippines was characterized by its intense “theological bullying” as it rallied against the reproductive health act. Yesterday, it was defined by Pope Francis’ simple yet powerful Tacloban Mass, one that nudges the Church back to its fundamentals.

Pope Francis’ gentle presence reminded that the downtrodden are and always have been the center of our faith. In Supertyphoon “Yolanda’s” ground zero, in driving wind and rain, on a makeshift stage in front of thousands of weeping Leyteños, their flimsy translucent yellow raincoats unintentionally hinting that all are equally humbled in God’s presence, he demonstrated faith in its simple raw beauty, shorn of doctrinal debate and its external trappings. He touched that kernel of Catholicism that gives the Filipino psyche such resilience. Indeed, he has emphasized during this whole visit that Tacloban was the reason he had come.

His opening said it all: “When I saw from Rome that catastrophe I had to be here.” His papacy has underscored that faith is needed not in the Sistine Chapel’s majesty, but in the humblest alleys and slums, and not in its historical bastions in Europe but in the developing world. His visit refocused attention on Yolanda’s victims who have not yet fully recovered but risk being forgotten.

And grown men wept when he said, simply, “I’m here.”

His speech was as humbling as it was humble. “So many of you have lost everything,” he said. “I don’t know what to say to you.” He said that he respected the sentiment of the many who asked the Lord why Yolanda had to happen, why they had to lose all their property and so many loved ones.

But he pointed to the crucified Christ. “He was consecrated as Lord on that throne and there he experienced all the calamities that we experience.” He asked the crowd to picture Christ on the cross, God trembling in human frailty, as he looked at his mother. “We are like a little child in the moments when we have so much pain and no longer understand anything. All we can do is grab hold of her hand firmly and say, ‘Mother,’ like a child does when it is afraid.”

In consolation and solidarity, he summed up that with Jesus, Mary and each other, no one is alone in his most trying times. “We have a Lord who cries with us and walks with us in the most difficult moments of life … I don’t know what to say to you … All I can do is keep silence and walk with you all with my silent heart.” And with these plain words, he deeply and personally touched those assembled, who did not leave despite the intensifying winds of Tropical Storm “Amang” that forced the Pope to cut his Leyte visit short.

To fully appreciate Pope Francis’ Tacloban homily, however, it must be viewed against the backdrop of his entire papacy, in which he cast himself not as a scholar and doctrinaire but as a practical leader who walks among his flock. He said that Jesus will never let one down and will always walk with us, but he did not say that Jesus carries us.

Pope Francis (and indeed, President Aquino in his welcome speech to the Pope) has emphasized that faith is not an abstraction, but must translate into genuine action because a man of faith cannot stand idly by as others suffer around him.

Before he said “I’m here,” Pope Francis apologized for being 14 months late. In those 14 months, the mud, bodies and wreckage in Tacloban have been cleared and many structures have been rebuilt, but many victims are still housed in admittedly unchristian conditions in bunkhouses and tents. A cargo ship that washed ashore into the district of Anibong prominently remains there, with residents hanging a welcome streamer for the Pope on its bow. All this must scandalize men of faith.

We of faith must take Pope Francis’ hint and redouble efforts to give our hard-hit Visayan brethren their due, to help them stand again on their feet and reclaim their dignity. Faith cannot stop at a glimpse of Lolo Kiko, a touching sound bite translated from his native Spanish or the most moving Mass of our generation. As Pope Francis taught, we must walk with Jesus and each other through every injustice and sorrow, out of our darkest moments, and into the light.